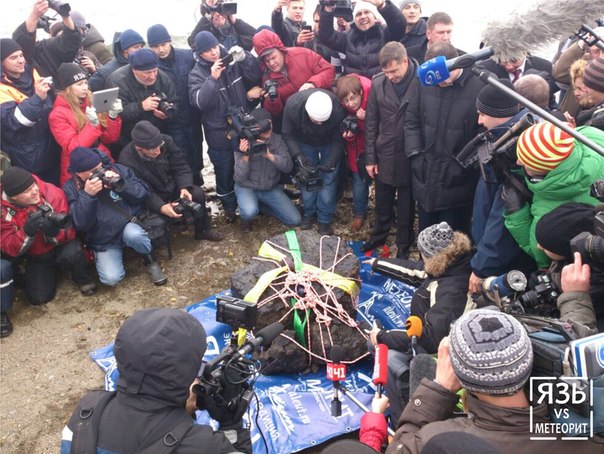 A half-ton chunk of the Chelyabinsk meteorite was raised from image credit: uralpolit.ru

A massive chunk of the meteorite that plummeted through Earth’s atmosphere in February, raising havoc in Chelyabinsk, Russia, was lifted from a deep lake bed by Russian scientists on Wednesday, October 16.  The recovery operation started on September 10 and was expected to last for about a week, but the process was stalled due to several obstacles, including massive amounts of sediment, which took ten days of pumping to move away from the meteorite. Divers had a difficult time raising the large, dense rock from the murky water, and the weight of it actually broke the scale. “The rock had a fracture when we found it,” one scientist told the lifenews.ru website in a live transmission.

“It weighed 570 kilograms before the pieces fell off. And then the scale broke. We think the whole thing weighs more than 600 kilograms (1322 pounds),” he said.

The February event made headlines around the world and took the internet by storm, with eyewitness video footage from many citizens in the area. Although the rock itself didn’t cause much damage, many people were injured by destruction and debris caused by its sonic boom.

This article was written using various reports that appeared on PhysOrg.com, Lifenews.ru and other sources.