‘Gravity,’ China and the end of American Exceptionalism in outer space 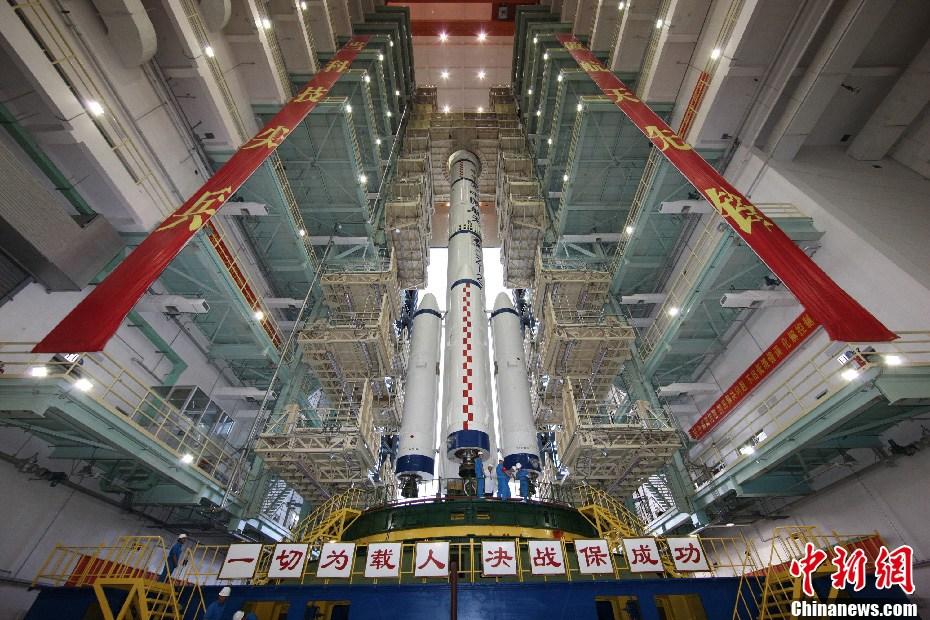 By now, you have already seen the new space thriller, Gravity. If not, get up right now, go see it, then come back to this (spoilers ahead).

You may herald the tension as the astronauts dodge terrifying high-speed space debris, or praise its scientific accuracy (or inaccuracy). But there is another more subtle theme to appreciate: the multi-national and cooperative nature of space exploration.

(Disclaimer: Yes, the entire fictional catastrophe was the result of Russia’s presumably unauthorized attempt to shoot down one of their own satellites. Perhaps this was the film’s nod to the need for better space debris management policy.)

The International Space Station (ISS) makes several dramatic appearances. And Russia’s Soyuz gets a starring role as its ill-fated escape vehicle, making a decent showing despite heavy damage from the rogue space junk.

And it should be no surprise: Soyuz is currently the U.S.’s sole method for shuttling its astronauts to the ISS (though Gravity is set in a parallel reality where the Space Shuttle is still flying), and with nearly 30 years in operation, it’s also the most cost-effective and reliable human space transport system to date. Gone are the days of Russia vs. the U.S.

But ever-present are the days of the U.S. vs. China.

When Soyuz takes a beating too intense to make it back to Earth, Sandra Bullock’s Dr. Stone must use it to shuttle herself to China’s Shenzhou re-entry capsule, believed to have survived the catastrophe. But unlike Soyuz, Shenzhou is not docked to the ISS; China, even though it works alongside many non-NASA space partners, is not welcome aboard. Instead, it has its own station, Tiangong, situated in a separate orbit.

An interesting parable: isolated, yet still there, and pushing on, whether part of the team or not.

It turns out that Shenzhou’s re-entry sequence is identical to that of Soyuz (Russia sold much of its own technology to China in the ’90s), so Stone is able to pilot Shenzhou—despite extensive damage—safely back to Earth. No trite “Made in China” jokes here.

An American astronaut in a Chinese space ship? This truly is the stuff of science fiction, because it may just take a disaster of Gravity‘s proportions for that to happen. With NASA currently dependent on Russia for access to the International Space Station, many are wondering if the U.S.’ days of leading manned space exploration efforts – are over. Photo Credit: NASA

A few days ago, American researchers announced they would boycott a major NASA conference because scientists who are Chinese nationals are banned from attending. The policy is a result of NASA’s interpretation of the moratorium on Chinese nationals’ access to its facilities following this year’s espionage indictment of Bo Jiang, a NASA contractor and Chinese national. He was eventually found innocent of spying, but still, Bo, the remaining 192 Chinese contractors who worked at NASA, and all further Chinese nationals are denied access.

Adding further fuel to the fire is the law which makes it illegal for NASA ”to develop, design, plan, promulgate, implement or execute a bilateral policy, program, order, or contract of any kind to participate, collaborate, or coordinate bilaterally in any way with China or any Chinese-owned company.” The legislation’s biggest champion, long-time China critic Rep. Frank Wolf (R-VA), grounds his rationale in espionage fears, China’s human rights record, and the idea that ”we don’t want to give them the opportunity to take advantage of our technology, and we have nothing to gain from dealing with them.” Combine this perspective with the U.S.’s controversial  International Traffic in Arms Regulations (ITAR) trade restrictions, and it’s no wonder Tiangong is so far away.

Yet, still, China charges on.

And they do so with the backing of much of the international community. Two weeks ago, I attended the International Astronautical Congress held this year in Beijing. The Chinese space program was proudly on display, and international agencies eagerly arranged meetings with the rapidly developing program. NASA’s manned space program has languished since the end of the space shuttle era. Many other nations, including China, have rushed forward to fill that void. Photo Credit: NASA

One of the plenary panels featured the heads of the world’s space agencies, including China’s Dr. Ma Xingrui and NASA Administrator General Charlie Bolden. And although positive overall, there were still some uncomfortable moments.

While many of the agency heads talked about how they’ve been collaborating with China for years—and Gen. Bolden even expressed interest in eventually working with The People’s Republic—Ma mentioned (with a healthy dose of sarcasm) that China has not been invited to participate in The Global Exploration Roadmap—an international space exploration planning initiative, in which the U.S. is a primary member. In fact, much ado has been made of America’s deliberate attempts to isolate China on the international stage.

And then things got weird. During closing statements, after acknowledging his frustrations with Washington and NASA’s budget, Administrator Bolden pronounced that the United States has “the best space program in the world.” Awkward.

You could see the eyes rolling on stage, and hear the disapproving murmurs in the crowd. That statement was made in front of thousands of people. On the same stage with all those “lesser” space programs. As a guest in a country that many would argue is kicking America’s butt in space. A country that is one of only two with manned space flight capability (a club in which the U.S. is not currently a member), has plans to establish a base on the moon, and is so critical a player that the European Space Agency has its astronauts learning to speak Chinese.

Admittedly, this statement seemed rather uncharacteristic of the affable, positive, and charismatic disposition Bolden is so famous for. However, as NASA’s head, he is the Agency’s designated political figure; his public message is a reflection of the politics of Washington and the Administration whose policies it is his job to represent—whether he agrees with them or not. And that is an incredibly tough role to play.

But to exhibit such an overt expression of American Exceptionalism on an international stage? That was bold.

But was it effective?

NASA’s debilitating budgetary and strategic foresight issues are not news. After having had to pull out of previously committed missions, the sequestration effects which have left NASA over $1 billion short of its requested budget, a deadlocked congress who cannot seem to agree on what NASA should be doing, and a government shutdown that has left 97 percent of NASA employees furloughed, Exceptionalism claims, at least right now, seem a bit naïve.

But for argument’s sake, let’s say that Bolden was right. After all, the Chinese space program isn’t exactly transparent, and some analysts argue its growth is unsustainable. But what message does the rhetoric of Exceptionalism send to our international partners, being told that they are a step below, merely along for the ride?

Now imagine we are indeed falling behind. The romantic bygone era of winning the Space Race is in the past. Wouldn’t it make a stronger case for NASA funding if we were more honest about our competitive positioning—especially given how much pride Americans take in being “the best?” Since the last space shuttle mission concluded in 2011, only Russia and China have the capability to send humans to orbit. Photo Credit: Mike Howard / The SpaceFlight Group

The reality is that no matter how capable we are, we need the help and support of the international community. Although NASA took the lead, the Mars Curiosity rover was an international effort, with key instruments contributed by Canada, Spain, Russia, and France. The ISS is funded and managed by 5 space agencies. And we can bash China all we like, but there is a reason countries are so eager to work with them, and it’s certainly not because the Chinese are failing. So perhaps an adversarial stance is not the most productive option.

This is not to downplay the geopolitical implications of the U.S. – China relationship, and this piece barely even scratches the surface of the complexities. There are real concerns of espionage, human rights, and other factors that must be taken into consideration. But they aught not be reduced to tools for political posturing. In a conference hall full of multinational teams of scientists and engineers working towards a peaceful and collaborative future for humanity in space, platitudes simply do not resonate.

Instead, they stop the conversation in its tracks. They create false boundaries, boundaries that Gravity shows us when viewed from the orbital perspective, mean absolutely nothing. Thank heaven for Russia’s collaboration with the Chinese in designing Shenzhou. Thank heaven for post-Cold War scientific collaboration with Russia (our respective politicians could take a cue), and that Soyuz has a home on the International Space Station. And thank heaven we are able to share the cost of the ISS when Congress flippantly adjusts NASA’s budget along party lines, or decides to shut down the government. Because if it weren’t for international partnerships, Gravity would have ended a lot less optimistically.

Lauren Lyons recently completed her Masters degree in Public Policy at the Harvard Kennedy School of Government where she studied Science and Technology Policy, and wrote her capstone exercise on reframing NASA's public engagement challenge using Adaptive Leadership frameworks. She is also graduate of Princeton University, where she earned her bachelors degree in Mechanical & Aerospace Engineering, a certificate/minor in Engineering Biology, and spent three summers as an engineer at NASA's Jet Propulsion Laboratory working on the Mars Exploration Rovers and MSL-Curiosity missions. In short? Laurel knows of which she writes. Lauren currently works as a science communicator and writer where she helps organizations make their stories and discoveries more accessible to the general public; she researches Space exploration public outreach with the purpose of driving civic action; she trains scientists and engineers to become better technical communicators and public speakers; and she is a member of the United Nation's Space Generation Advisory Council.