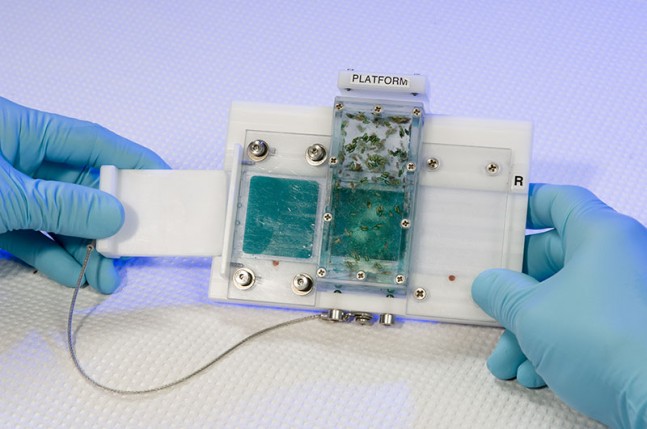 A T-bar is used to slide a fresh food tray into a Fly Cassette that is mounted onto a Food Changeout Platform. In this image, the fly food is stained with a blue food dye. Photo Credit: NASA / Dominic Hart

When Space Exploration Technology’s (SpaceX) fifth commercial resupply (CRS-5) mission launches to the International Space on Jan. 9 more than 100 tiny winged members of the species Drosophila memanogaster, or common fruit fly, will be along for the ride.  The insects are part of a mission called Fruit Fly Lab-01 which will debut a new research platform  developed by NASA Ames Research Center for long duration fruit fly experiments about the ISS. The fly cassette is a habitat for the fruit flies. The fly food is is stained with a blue food dye. Photo Credit: NASA/ Dominic Hart

Fruit flies are a widely used biomedical research model because approximately 77 percent of human disease genes  have analogs in the fruit fly genome. Studying fruit flies can help scientists better understand the underlying mechanics of human illnesses. Experiments aboard the ISS  will study how microgravity, radiation and other aspects of the space environment affect the fruit flies, providing data that is relevant to human health.

The Fruit Fly Lab system has three major parts. The first is the Cassette, which is used to safely transport the flies to the ISS and also serves as their habitat during the experiment. The second is the Food Changeout Platform which will be used to change the fruit fly food without allowing flies to escape and also allows for the removal of fly larvae for preservation. The final component is the Fly Camera which will be used to monitor fly behaviour during exposure to an Earth-like day/night cycle created by LED lights built into the system.

The Fruit Fly Lab system will be installed  aboard the ISS in the  Japanese Experimental Module.  Half of the flies will be kept in microgravity and the other half will be in a NanoRacks centrifuge to simulate Earth-gravity. This will help scientists differentiate between the effects of microgravity and other factors such as radiation and launch forces. While the Fruit Fly Lab-01 mission will be only 28-days in duration, future missions could be much longer. Multiple generations of space-bred fruit flies could be bred with sufficient hardware and food.

“At the end of the 28-day validation mission we expect to be studying the children, grandchildren and possibly great-grandchildren of the original population of fruit flies that are launching aboard SpaceX CRS-5,” said Sharmila Bhattacharya, director of the Biomodel Performance and Behavioral Laboratory at NASA Ames and Principal Investigator for the mission. During the mission an immune study will be conducted to demonstrate that the system operates smoothly aboard the station and can deliver high-quality data.

“Data from this validation study will confirm and extend findings from shorter-duration studies we conducted aboard the space shuttle that examined how spaceflight impacts fruit fly immune responses,” said Bhattacharya. “We are conducting a host-pathogen study involving immune challenge in orbit where both the flies and the bacteria are under the influence of spaceflight.”

From previous research it is known that some microbes become more infectious during spaceflight and the immune systems of complex organisms such as humans and fruit flies can be weakened. Understanding the underlying mechanics of these phenomena will be crucial to protecting the health of astronauts on deep space flights such as a journey to Mars.

During the mission, some of the flies’  food will contain a microbe that will infect the flies.  The scientists will compare the fruit flies ability to resist infection by the microbes between the flies that were exposed to microgravity, those exposed to simulated Earth-gravity in space and a group of flies that remained on Earth.

Once the  Fruit Fly Lab-01 mission is completed, the Fruit Fly Lab system will be available for research proposals from the scientific community. NASA expects to conducts a series of yearly studies to follow the initial mission.

The present trend to keep trying to find ways around the Human in Human Space Flight is bound to end only way- in failure. Humans evolved in one Earth gravity and near sea level radiation and sending them into space for years at a time means providing that environment or causing permanent damage. No way around it.

The present design philosophy of chemically propelled spacecraft with no shielding or artificial gravity systems must be left behind. The Moon is the place to go for water shielding six times more accessible than Earth’s gravity well and outside Earth’s magnetosphere where nuclear propulsion can be used.

The ice on the Moon should be the central focus of the entire Human Space Flight community. Not LEO and not Mars and certainly not going cheap with New Space rockets that are essentially uesless. Super Heavy Lift Vehicles are required to place the payloads on the Moon and the wet workshops in lunar orbit for any progress to be made.