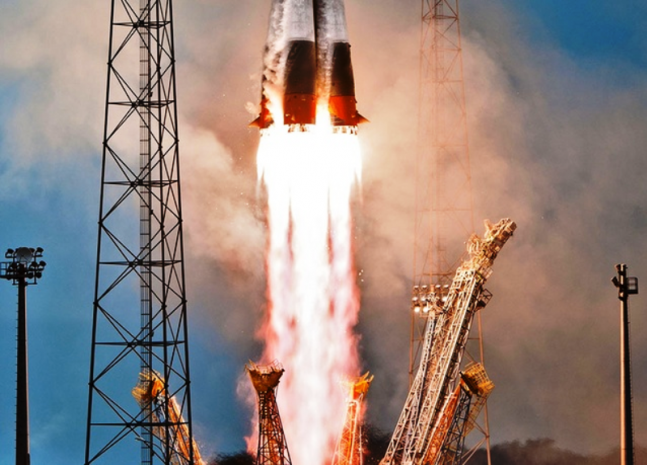 At 2:55 PM (18:55 GMT) today, four O3b satellites lifted off from the Kourou Spaceport in French Guiana atop an Arianespace Soyuz ST-B. The mission delivered a new installation of O3b Networks’ space-based constellation of satellites designed to supply internet services and telecommunications with a fiber-optic network. One of the four O3b satellites mated to the upper stage of the Soyuz ST-B in preparation for launch. Photo Credit: Arianespace

This mission is a continuation of last year’s that launched the first four satellites of the constellation into orbit. Today’s Soyuz mission, dubbed Flight VS08 in Arianespace’s numbering system, marks the eighth launch of a Soyuz vehicle since 2011. The Thales Alenia Space built, O3b Ka-band satellites will be in a medium orbit at an altitude of 5,009 miles (8,062 kilometers) will provide a boost to telecommunications and internet services to the majority of the world’s population. O3b or “other 3 billion” is named for the estimated number of people without reliable internet connections, and boosting connection speeds in locations such as homes, businesses, schools and even hospitals.

“Tonight’s launch is the second performed by Arianespace for O3b, a little more than one year after the first successful flight that marked O3b’s debut,” commented Stephane Israel, Chariman and CEO of Arianespace.

The Guiana Space Center is located off the northern coast of South America and is a European-run spaceport. The Soyuz launched from the space center, over the Atlantic Ocean and with mostly cloudy skies. Approximately ten minutes after liftoff, the upper stage along with the four O3b satellites were released into space. The Soyuz launcher has three a three-stage core and has flown over 1,800 times since the 1950s. Equipped with a Fregat main engine, which fires a total of four times, inserting the satellites into their planned circular orbit of 4,865 miles (7,830 kilometers) above the equator. Each satellite weighs approximately 1,543 pounds (700 kilograms) and via a tubular dispenser system on the upper stage, were released into orbit in pairs.

Lavochkin Research and Production Association constructed the autonomous, highly-flexible Soyuz Fregat upper stage. This system is designed to conduct complex mission profiles and is capable of being restarted as many as 20 times in one flight. For today’s mission, the Fregat orchestrated three main burns in order to deliver the four satellites into orbit, with a short fourth burn in between each pair of satellite deployments.

The Soyuz launch site at the Kourou Spaceport combines tried-and-true designs found at Baikonur Cosmodrome in conjunction with satellite integration procedures compatible with spacecraft processing used for the Ariane missions. The vehicle assembly building is setup like the Russian Baikonur and Plesetsk Cosmodromes and configured to allow for horizontal vehicle assembly before rolling out to the pad. However, unlike the Baikonur Cosmodrome processing, at Kourou the Soyuz is horizontal atop a transporter car and then raised into position on the pad.

August 21 will be the next Soyuz launch from French Guiana and it will carry two Galileo navigation satellites for the European Commission, who is currently working developing a counterpart to the U.S. Air Force’s Global Positioning System (GPS). However, the next launch from French Guiana will be on July 24 and will involve an Ariane 5 rocket delivering the fifth and final Automated Transfer Vehicle (ATV) to the International Space Station (ISS). The four satellites launched today, designated FM 3, 6, 7, and 8, should enter service around the beginning of September. All four satellites were reported as responding to initial commands after the upper stage separation according to SpaceFlight Now.  Ground control has the next several days planned for various testing of each satellite’s primary systems and will eventually steer them into a higher orbit where they will officially be part of the constellation. Transmitters and antennas will undergo three weeks total of checkout and activation.

The spacecraft were originally scheduled to launch in September 2013; however, engineers discovered a power system issue on the satellites. They were shipped back to the factory in Rome, repaired and prepared again for launch. Due to constraints in the Soyuz rocket’s manifest, today was the next available launch date. O3b Networks’ CEO Steve Collar said, “Those issues really have no impact whatsoever on our customers. One of the great benefits of being a constellation is that we will continue to launch satellites into the same orbit, and what we saw on the first four satellites has almost no impact on our business going forward.”

O3b officials have been very eager for these four satellites to launch as they will expand O3b’s reach and give the company a stronger presence in space. The first set of O3b satellites have been performing beautifully and O3b CEO Steve Collar says customers have been very please with their capacity.

“The performance has blown us away, to be honest. We are able to provide more than a gigabit per second per beam–the sorts of throughputs that you normally associate with fiber. With satellites, you’re normally talking about kilobits or megabits per second. We’re orders of magnitude higher in terms of throughputs.”

O3b has commercial service contracts with Telecom Cook Islands, Digicel Papua New Guinea , Timor Telecom of East Timor and even trial service on Royal Caribbean’s Oasis of the Seas cruise liner with full service hopefully by the end of this year. Clients in the Democratic Republic of the Congo and Samoa will soon be added to the growing list of O3b clients.

Four additional O3b satellites, also built by Thales, are slated for launch early next year. Concepts are already in development for the next-generation of O3b satellites. Since they fly in a unique, sparsely-populated orbit, there is plenty of room for additional satellites. With ever-increasing demand for connectivity, Collar expects there will be future plans for even more satellites.