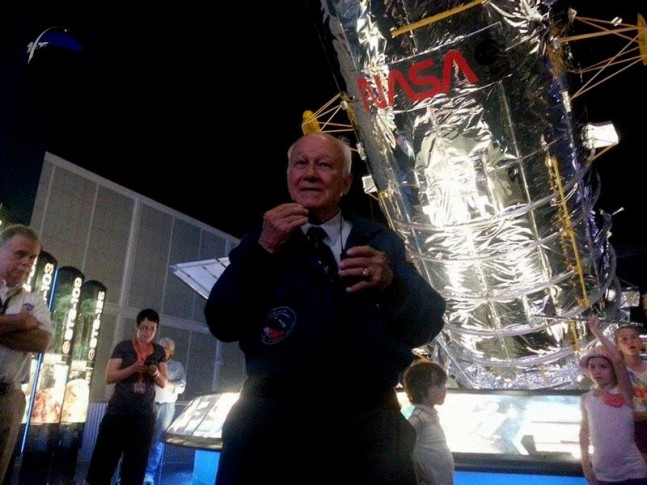 A veteran of the U.S. Navy, McCandless began his NASA career in 1966 and held several positions before his spaceflight career launched aboard the Space Shuttle Challenger in 1985. During the historic Apollo 11 mission, Bruce served as CAPCOM, meaning he was responsible for all communications between Mission Control (Houston) and the Apollo 11 astronauts: Neil Armstrong, Buzz Aldrin, and Michael Collins.

In addition to his CAPCOM role, McCandless was part of the astronaut support crew for Apollo 14, served as the backup pilot for the first manned Skylab mission, co-investigator on the M-509 astronaut maneuvering unit experiment (Skylab), and worked on the development of the manned maneuvering unit (MMU) used during shuttle spacewalks (EVAs).

McCandless helped with crew inputs for hardware and procedural developments of the Inertial Upper Stage (IUS), Space Telescope, Solar Maximum Repair Mission, and the Space Station Program. Bruce logged over 312 hours in space including four hours as part of the first untethered spacewalk with the help of the MMU. He served as a Mission Specialist for two shuttle missions – STS-41B and STS-31.

When asked about his MMU experience Bruce said, “It may have been one small step for Neil, but it was one heck of a big leap for me.”

Kennedy Space Center annual passholders were in for a real treat on Sunday as they had the opportunity to participate in a special guided tour of the Saturn V Center by Bruce McCandless. The tour started off with a stop in the center’s Apollo 8 Firing Room, where the actual launch control consoles from the Apollo program are displayed. Visitors viewed three screens of original news clips from early NASA and footage from the Apollo 8 mission. The doors then opened to the Saturn V room, where a fully restored Saturn V rocket is housed; one of only three still in existence. The Saturn V was the most powerful rocket ever built and stood 363-feet tall. McCandless spoke at each of the rocket’s different stages, lecturing the audience on the rockets components as well as the lunar lander and the lunar rover (“moon buggy”).

The Apollo anniversary celebration continued at the Space Shuttle Atlantis exhibit where Bruce took some time to answer audience questions about the Apollo program and the famed mission. Later in the afternoon, Bruce McCandless was joined by Jack Lousma for a viewing of the historic lunar landing at the very time Neil and Buzz touched down 45 years ago.

Jack Lousma was selected to be a NASA astronaut in 1966 and is a veteran of two missions – the first manned Skylab mission as well as the third shuttle mission, STS-3. He served as astronaut support crew for Apollo 9, 10, and 13. For the Apollo 13 mission he was the designated CAPCOM and received the famous distress call from astronaut Jim Lovell saying, “Houston, we have a problem.”

When asked to describe how they remember the Apollo 11 mission, Bruce said: “It seems like only yesterday, to be quite honest. It was a relief because we were under a great deal of pressure back then. We launched a different Apollo mission every two months to test and prepare for a lunar landing. And quite frankly it was a great relief we were successful and were able to get back up there for Apollo 12.”

He went on to express his disappointment that we haven’t been back since Apollo 17.

“It’s true we’ve been there, but we only made six landings on the Moon. We didn’t make any on the backside, where it’s very different from the side facing Earth, we have made any high-altitude landings near the poles, and no landings in very rugged zones. There is lots of science left to do there.” Jack Lousma and Bruce McCandless give their account of the Apollo 11 mission. Photo Credit: Spaceflight Insider

Jack Lousma joked with Bruce saying he had a lot more luck as CAPCOM with the Apollo 11 crew than he did with the Apollo 13 crew. He went on to say, “it was because of the early NASA astronauts that I applied to NASA’s astronaut program and felt the Apollo program was going to be important to the country and to the world. I couldn’t be happier to be part of it.

Jack regaled the audience with stories of his first days at NASA and how he lived in the same neighborhood as Neil Armstrong. He described Neil as “a soft-spoken man, a true leader, and there was no one better to lead the team than Neil. He didn’t say much, but when he did, everyone listened.”

Excellent article Amy, I wish I could have been there. When I was fortunate to meet Col. Lousma at the Yankee Air Force Museum here in Michigan, I asked him, “Colonel, do you think that we should return to the Moon?”, he replied, “Definitely, only this time we should stay!” He is a GREAT GUY!

Thanks Karol! It was such an amazing experience just to be able to hear them talk. I could listen to astronaut stories all day. How wonderful you were able to meet him.

McCandless, Duke and all Apollo capcoms deserve a very special recognition as those who brought the Apollo missions to the world community through their clear, concise communication. Let’s not forget their important contributions to these historic events.