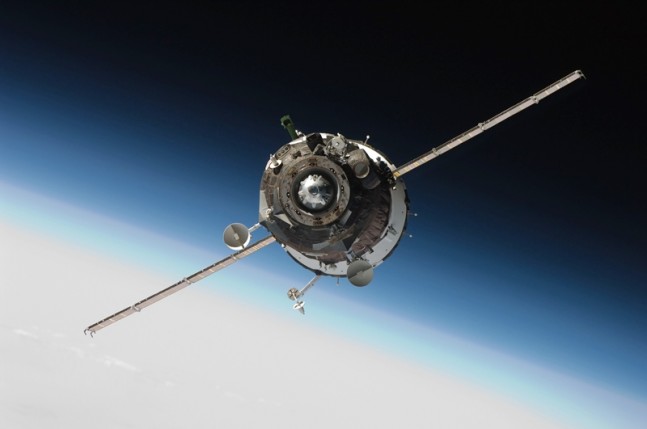 What started out with a flawless night launch atop a Soyuz FG rocket from the Baikonur Cosmodrone in Kazakhstan on March 25 – has become a waiting game for the three crew members who rode fire atop the rocket in their Soyuz TMA-12M spacecraft. What has been described as a “hiccup” in the rocket’s performance into low-Earth-orbit has seen what should have been a six hour trip to the International Space Station (ISS) extended to two days.

The failed DV3 (an orbital correction) burn caused what should have been a trip lasting 4 orbits – extended to 34. The crew, consisting of Alexander Skvortsov, Oleg Artemyev and Steven Swanson are not in any danger. They removed their flight suits at the normal time. In the past, the normal path the Soyuz spacecraft took lasted a similar amount of time. If everything else goes according to plan, the trio should arrive at the orbiting laboratory on on Thursday, March 27. Getting the Soyuz TMA-12M spacecraft in the proper alignment for rendezvous has been stated as requiring two nights to conduct correctly now that the six hour trip is no longer possible. The Soyuz TMA-12M will wait in a higher orbit for the ISS to catch up to it. It should dock with the orbiting lab on March 28. Photo Credit: NASA

In an interview appearing on the NK Space Forum, Energia, the company which produces Soyuz, president Vitaly Lopota stated the following:

“This has happened before – the engine hiccuped during the approach [to the ISS] – the reason is not clear, it could be inferior fuel or a bubble (of air) but the automatic system immediately pulled the ship away from the station and the cosmonaut switched to TORU (tele-operator control mode). True, we lost 200 kilograms but the docking was successful anyway,” Lopota said.

The Soyuz FG booster, according to these reports, “over-performed” leaving the crew in an orbit approximately 12 miles (20 kilometers) higher than anticipated. Both the dV3 and dV4 burns are designed to compensate for issues with variations in the Soyuz FG’s performance.

Given the problems encountered, the on board computer apparently opted to use what is known as the DPO (in essence, the vehicle’s attitude thrusters) rather than the main engine to correct the problem. It is not clear what happened at that point, but so far, engineers are placing the blame on a software error.

Attempts to communicate to the spacecraft through NASA ground stations failed leaving controllers back on Earth to theorize that one out of the two orbit five burns had been carried out successfully.

As it stands now, Soyuz will be placed in a higher orbit than the space station and allow the ISS to catch up.

The latest issue with a Russian-produced space system follows the public loss of a Progress M-12M (Прогресс М-12М) cargo vessel which was lost in 2011 and a Proton rocket which exploded shortly after liftoff in July of 2013, destroying the GLONASS navigation satellites it was carrying. Moreover, relations between Russia and the United States have chilled with Russia’s military actions in the Ukraine.