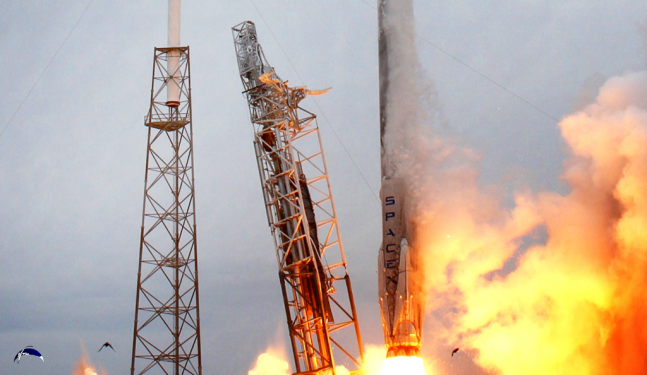 CAPE CANAVERAL, Fla — Space Exploration Technologies (SpaceX) and NASA launched the third of the company’s Dragon spacecraft under the $1.6 billion Commercial Resupply Services (CRS) contract that the NewSpace firm has with the space agency. Liftoff occurred right on time at 3:25 p.m. EDT (1925 GMT), marking the fourth time overall that a Dragon rode flame to deliver supplies to the International Space Station (ISS) – but the first time that Dragon was carried aloft by the upgraded v1.1 version of the Falcon 9 – the benefits of which were obvious. SpaceX was able to more than doubled the amount of cargo and supplies it delivered to orbit from what the company has launched in the past.

For the past two flights under the CRS SpaceX lofted just shy of 4,000 lbs (1,814 kg) combined – in this one mission alone SpaceX sent approximately 4,600 (2,086 kg) lbs of crew supplies, spare parts, replacement parts and experiment components to the orbiting laboratory. One of the more unique aspects of today’s flight was the inclusion of “landing legs” on the Falcon 9’s first stage. Photo Credit: Carleton Bailie / SpaceFlight Insider

Events outside SpaceX’s control recently conspired to either delay the flight or threaten to do so. A short-circuit with a range radar last month saw the mission’s start delayed by three weeks. Just some four days before today’s launch, a failure with the ISS’ Multiplexer Demultiplexer (MDM), which serves as a backup for the system which controls many of the mobile elements on the exterior of the station, threatened to push the flight back even further. Mission managers reviewed the problem and found a workaround. Then, on April 14th, during the previous launch attempt, a helium leak caused a scrub – causing NASA and SpaceX to move the launch to today. Weather conditions deteriorated throughout the past few days with storms causing a steady downpour of rain causing concerns that the flight would be delayed further.

The looming clouds hovering overhead were no match for the Falcon 9 however. At T-13 minutes, the final poll was conducted and the “GO” was given for launch. Three seconds prior to liftoff, the nine Merlin 1D engines, arranged in the Octaweb configuration, roared to thunderous life. During the intervening moments until T-0, the flight computer verified that everything was nominal and the Falcon 9 thundered into the awaiting skies.

A dark plume was clearly visible racing up the side of the rocket. Concerns were quickly addressed when Elon Musk stated that the plume was, in essence little more than dirty water.

About one minute and 10 seconds into the flight and the Falcon 9 / Dragon “stack” were traveling supersonic – faster than sound. About 13 seconds later, the launch vehicle was powering through the region known as “max-Q” or maximum dynamic pressure. This is where the rocket’s speed, when coupled with the pressure of the atmosphere surrounding it place the F9 and Dragon under the greatest amount of pressure.

Just a little over two-and-a-half minutes into the mission and the first stage’s engines shut down. At this point in the flight the Falcon 9 was some 50 miles (80 kilometers) in altitude and traveling at about 10 times the speed of sound. Three seconds after this point (known as main-engine cutoff or “MECO”) and staging occurred. The first stage separated and began its own journey down to the Atlantic waiting far below.

“SpaceX really showed a ‘can-do’ attitude in terms of getting off the pad and into the sky, so congratulations to them,” said NASA Associate Administrator for the Human Exploration and Operations Directorate William Gerstenmaier. “It’s always great to come to Florida and see all the progress that is being made by not only NASA’s commercial partners, but with the Orion spacecraft as well. Whenever I have the chance to get out of Washington and see all the great work that takes place down here.”

Meanwhile, the second stage had activated its single Merlin vacuum engine and commenced a burn which lasted for about six minutes – placing Dragon into low-Earth-orbit. There was an issue with the isolation valve which connects to the thruster quads which control Dragon on orbit. SpaceX switched over to the backup system which worked properly alleviating the problem.

“It looks like the rocket’s flight went as perfect as possible and Dragon deployed well,” said SpaceX’s Founder and CEO Elon Musk. If everything goes according to plan, Dragon will be grappled by the Canadarm 2 and berthed to the International Space Station on Easter Sunday, April 20. Photo Credit: Carleton Bailie / SpaceFlight Insider

There are several, critical components on board Dragon, which include parts for space suits and other items needed for the steady running of the on-orbit lab.There are also less-critical, but very interesting elements of this mission both in terms of the launch vehicle as well as the payload itself.

Perhaps the most unique element of the CRS-3 flight – is the “landing legs” which are affixed to the Falcon 9 v1.1’s first stage. SpaceX planned to have Falcon’s first stage conduct a water landing. Representatives with the company stated that they did not expect the system to work on this first attempt. In essence, the company is working to test the system out to see what needs to be done to have the Falcon 9’s first stage conduct a return to the launch site – CCAFS’ SLC-40.

The remaining payload amount, some 1,250 lbs – is in the unpressurized “trunk” section on Dragon.

The experiments that rode to the ISS on the wings of the Dragon will support more than 150 experiments which will be carried out by crew members of Expeditions 39 and 40. Some of these experiments include, but are not limited to, research into laser-based data relay system to transmit data to Earth, research behind the root cause of a depression in the human immune system which impacts the elderly and much more. Also taking the trip to orbit atop the Falcon 9 v1.1 are four commercially-available high-definition video cameras which will provide live streaming video from the ISS.

“With Friday’s launch by our partners at SpaceX, CASIS completed yet another milestone as we’ve sent our first projects funded through an official grant solicitation,” said CASIS president and executive director as well as a former shuttle astronaut himself, Gregory H. Johnson. “Over our first two series of payloads destined for the National Lab, CASIS has already demonstrated the diversity within brokered projects, ranging from physical and biomedical sciences to plant biology and education projects. In the coming months and years, we look forward to expanding on the innovative scientific investigations that will benefit life on Earth.” A dark plume which was seen racing up the side of the Falcon 9 was identified by Elon Musk as being little more than dirty water that was turned into steam at liftoff. Photo Credit: Carleton Bailie / SpaceFlight Insider

There are also five Cubesats on the Falcon 9, these small, low-cost spacecraft are affixed to the F9’s second stage and will be deployed as a secondary payload once the Dragon is on its way.

Dragon also has stowed within it the space “legs” for Robonaut 2, these should allow the humanoid-shaped robot to traverse the exterior of the space station, allowing the robot to carry out many of the tedious and potentially-dangerous tasks currently required of station crew members. For their part, the 45th Space Wing highlighted that today’s launch was a team effort, one which was made possible from private, civil and military organizations.

“Once again, we are proud to work hand-in-hand with SpaceX and NASA, as well as all our other mission partners in making this launch another success story coming from the Eastern Range,” said Col. Robert Pavelko, vice commander of the 45th Space Wing. “We truly have a tremendous team here on the Space Coast.”