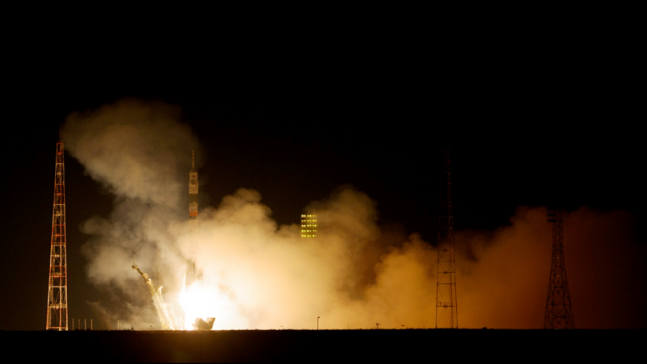 The remaining Expedition 39 crew members, bound for the International Space Station (ISS), launched successfully today from the Baikonur Cosmodrome located in Kazakhstan atop a Soyuz FG rocket. The crew was comprised of Alexander Skvortsov, Oleg Artemyev, along with NASA astronaut Steve R. Swanson. Liftoff of the Soyuz TMA-12M spacecraft took place at the very opening of the launch window at 5:17 p.m. EDT (2117 GMT) – the 121st such spacecraft to do so.

This marks 53-year-old Swanson’s third ride to orbit, having already served aboard space shuttle missions STS-117 (in 2007 on  Atlantis) and STS-119 (2009 on Discovery). This marks Skvortsov’s second trip into orbit, following his 176-day stint with ISS Expeditions 23 and 24 in 2010, while Artemyev is experiencing space travel for the very first time. The trio will at first serve as flight engineers on board the orbiting laboratory. Swanson is poised to take command as the space station’s commander with the start of Expedition 40. The first part of the Expedition 39 crew, consisting of commander and veteran Japanese Aerospace Exploration Agency (JAXA) astronaut Koichi Wakata, and flight engineers Richard A. Mastracchio (NASA) and Mikhail Tyurin (Russian Federal Space Agency), arrived at the station back on November 6. Upon arrival they joined the three members of the Expedition 38 crew already on orbit. With the departure of Expedition 38 on March 11, Wakata took command of the space station.

Skvortsov, Artemyev, and Swanson lifted off from Baikonur on top of the venerable Soyuz-FG launch vehicle – the primary means of sending humans to orbit and a workhorse of the Russian Federal Space Agency (Roscosmos). The rocket has been lofting crews to the ISS since 2002.

The Soyuz rocket departed from what is called LS-1, also known as “Gagarin’s Start,” because this is the exact spot from which cosmonaut Yuri Gagarin began the first human journey into orbit on April 12, 1961. Since that time, hundreds more spacecraft have started their ventures from this location, including all crewed missions to the ISS that have been handled by Roscosmos. The very first rocket to launch from here was an R-7 intercontinental ballistic missile, the forerunner of today’s Soyuz fleet; the most recent was Soyuz TMA-11M on November 7, 2013.

The Soyuz-FG is a two-stage launch vehicle with four strap-on boosters, all elements of which are fueled by a combination of RP-1 (a highly-refined form of kerosene) and liquid oxygen (LOX). The boosters, which burned for the first 118 seconds of today’s flight, before falling away, were each equipped with an RD-107A engine providing 188,502 lbs of thrust at near surface level.  The first stage, powered by a single RD-108A engine, generated 178,161 lbs of thrust and burned for a total of about 280 seconds. Finally, after the first stage had fallen away, the second stage ignited, providing 66,993 lbs of thrust for 230 seconds from its single RD-0110 engine — sufficient to give the Soyuz capsule orbital velocity before separating. The Expedition 39 crew should arrive at the space station some six hours after launch. Photo Credit: Bill Ingalls / NASA

Today’s launch to the ISS was the 37th for the Soyuz-FG, all of which have been successful. Additionally, there have been 10 launches of its sister vehicle, the Soyuz-FG/Fregat, which uses the Fregat third stage, again with a 100 percent success record.

The Soyuz-TMA spacecraft in which the crew are housed for both the ascent to the ISS and the return to Earth, is a three-section vessel, consisting of a spheroidal Orbital or Habitation Module at the front, a Reentry or Descent Module, and a Service Module.  The Reentry Module, shaped like an old car headlight, is used both for launch and the return to Earth. Its three couches and relatively spacious interior (compared, say, with the Apollo Command Module) can accommodate passengers up to 6′ 3″ in height and 209 lb in weight.

Ahead of the Reentry Module on the launch stack is the Orbital Module, which houses all the gear that is not essential for reentry, including cargo, cameras, and experiments. After launch and orbital insertion, the crew may transfer into it as a dining area or to use the toilet, which is located here. It also contains the docking avionics and communications gear, and, at its far end, the docking port, through which the crew transfer to the ISS. As an enhancement over previous versions of the craft, a small window is now provided, affording the crew a forward view. A hatch between the Orbital and Reentry Modules can be closed so as to isolate the former and serve as an airlock if needed.

The third, and uninhabitable part of the Soyuz spacecraft is the Service Module, which has both a pressurised and an unpressurised section. Within the former are life-support systems, the vessel’s electrical power supply, instrumentation for control and orientation, and long-radio communication and telemetry gear. In the non-pressurised portion of the Service Module is the main engine used for slowing the spacecraft after its departure from the ISS and thus beginning its journey back to the surface. Trips to the ISS nowadays follow highly-efficient trajectories. Less than six hours after take-off,  at about 11:04 pm EDT, Skvortsov, Artemyev, and Swanson will dock their Sozyuz TMA to the station’s Poisk module and begin preparations to transfer to the massively more spacious accommodation afforded by the ISS. Their capsule will remain at the station for about six months, providing an escape pod for the crew if needed.

Less than a week after they are scheduled to arrive at the station, the new arrivals will be involved in berthing operations for the SpaceX-3 Commercial Resupply Services mission. This is due to be launched, courtesy of a Falcon 9 v1.1 rocket, from Cape Canaveral Air Force Station on March 30. Range instrumentation issues have caused a delay of the launch of a United Launch Alliance Atlas V 541 rocket with its classified payload for the National Reconnaissance Office. It is unclear if the problems with the range will impact the flight of the Falcon 9.

A month after SpaceX’s Dragon is slated to be berthed to the ISS, Progress 55 will ferry in more cargo and crew supplies, followed by an Orbital 2 supply vessel, launched from Wallops Flight Facility on May 6. At the end of May, the arrival of three new crew members, preceded by the departure of the first half of the Expedition 39 complement will see the transition to Expedition 40 and the promotion of Swanson to station commander. Swanson has his work cut out for him – with a number of scientific experiments that the crew on the ISS will be working on. A NASA release detailed some of them: The trio will now join the three other Expedition 39 crew members already on board the ISS. Photo Credit: Joel Kowsky / NASA

One experiment, called T-Cell Activation in Aging, studies depression of the human immune system in microgravity. T-cells, which are a type of white cell, are coated with chemical receptors that must trigger together to activate the body’s immune system properly. T-cells from spaceflight crews and ground volunteers in a range of ages will be analyzed.

The Veggie hardware validation test will evaluate a new plant growth system that might make it feasible to eat plants grown on the space station. Veggie provides lighting and nutrient delivery for efficient plant growth in space. The plants grown in Veggie can support a wide range of uses, from research and education outreach, to a fresh food source and recreational gardening  activities for long duration space missions, which eventually will include missions to an asteroid and Mars.

Optical Payload for Lasercomm Science (OPALS) will test the potential for using a laser to transmit data to Earth from space. Instead of being broadcast on radio waves, data is packaged onto beams of laser light and pointed to a receiver station on the ground. Radio wave transmissions are limited by the speed they can transfer data, but beaming information packages with lasers can greatly increase the amount of information transmitted over the same period of time.

The Soyuz also is carrying hardware for the Microbiome investigation, which will continue studies on the impact of space travel on the immune system and on human microbiomes, the scientific name for the many different microbes living in and on the human body at any given time. Like previous expeditions, samples from crew members’ bodies and the space station environment will be taken periodically to monitor changes in the immune system and microbiomes. The results of this study may add to research on health impacts to people who live and work in extreme environments on Earth and help with research on early disease detection, metabolic function and immune system deficiency. The Expedition 39 crew will perform additional experiments that cover human research, biological and physical sciences, technology development and Earth observations, as well as engage in educational activities. The crew will conduct a pair of Russian spacewalks and as many as three U.S. spacewalks. They will greet two Russian Progress spacecraft resupply flights, the final European ATV cargo spacecraft, the second commercial resupply flight of Orbital Science’s Cygnus spacecraft, and the third and fourth flights of SpaceX’s Dragon cargo spacecraft.

Swanson, Skvortsov and Artemyev will remain aboard the orbiting laboratory until mid-September. Despite tension between the United States and Russia over the latter’s military involvement in the Crimea region – joint missions into space are still moving forward.