Ever dream of going into space? Jim Clash has a ticket to do just that – on SpaceShipTwo 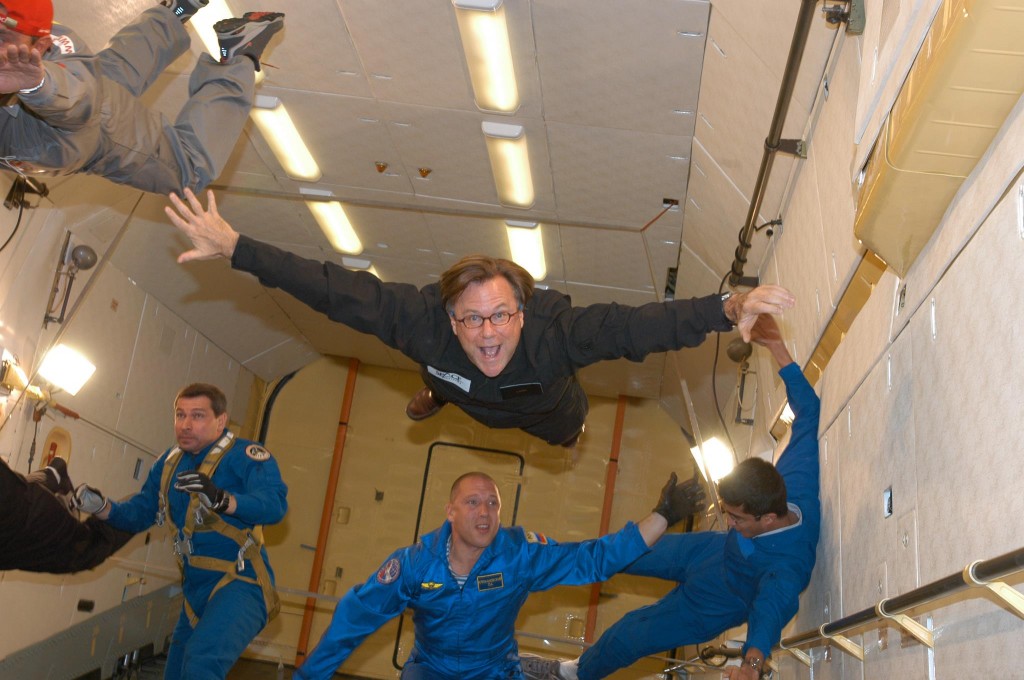 A weightless Jim Clash trains for his Virgin Galactic space flight in an Ilyushin 76 aircraft over Moscow. (Photo: Space Adventures)

Most everyone has dreamed of going to space at least once, wondering what it would be like to blast through Earth’s atmosphere, weightlessly peering at our planet from above. I know I have.

To date, fewer than 600 people have done it. But thanks to the private space tourism movement, the dream is about to become reality for many more. While seven “tourist-nauts” have already flown on a Soyuz rocket to the International Space Station by spending tens of millions of dollars of their own money for the rides, options now exist for those who aren’t billionaires.

The company closest to liftoff is Sir Richard Branson’s Virgin Galactic Airways (Galactic tickets sell for $250,000). A few months ago, Galactic completed its first rocket-powered test flight of SpaceShipTwo. Rumor has it that the first commercial flight may go early next year, with Sir Richard as one of its passengers.

I recently sat down with my friend Jim Clash, Galactic ticket holder #610, to chat about his upcoming trip. Clash, a fellow and director at The Explorers Club, is a seasoned adventurer who began his undergraduate studies as a physics major. Jim Clash has driven Indy cars at over 200 mph, but says his ultimate dream – and that of his baby boomer friends – is a space flight. Jim is passenger #610 on Virgin Galactic Airways. Photo Credit: Steve McNeely

The following are edited excerpts from our conversation:

SpaceFlight Insider: Talk about how you got started in adventure and your interest in other parts of the world.

Jim Clash: “As a kid I got my ham radio license, and literally was talking to people in Cold War Russia, the Pacific, Africa – all over the world. I thought, this is cool, virtual travel! And it inspired me as I got older, because many of those far-out places I’d fantasized about I’ve actually traveled to now. A big thrill was being on the South Pole in 2005 and getting on the ham radio, remembering what it was like as a teen talking to that very station from my home in Maryland. It was like living a dream in reverse. I was also very interested in science and physics as a kid, and adventure has a lot do to with those topics. Racecar driving, for example is all physics, angles and mathematics. I built a laser for my junior high school science fair – nobody had seen anything like that back then – and used a small telescope to look at the moon and planets.” Jim Clash: “I grew up during the Cold War. All of us were transfixed on the moon landings, Neil and Buzz walking up there, and even earlier John Glenn orbiting the Earth to pull us even Geminiwith the Russians. There was this feeling that someday we would all get to fly in space, too, because we had progressed so much technologically in the ‘60s. But we haven’t been back to the moon since 1972, and a lot of us are disappointed. So my dream as a baby boomer always has been to go to space. As an adventure writer I’ve done many extreme things, most everything I’ve wanted to do in fact, but I haven’t done space. It’s the final frontier (chuckles).”

SpaceFlight Insider: So walk me through this. You’ve bought a ticket – now talk about preparation. Does a person just get on SpaceShipTwo?

Jim Clash: “SpaceShipTwo will fly suborbital, pretty mild compared to orbital flight. It’s the difference between say, Mt. Kilimanjaro and Mt. Everest. An orbital flight needs 17,500 MPH of speed, which requires a lot of technology – and risk. SpaceShipTwo will only go a few thousand MPH and is like what America did with Gus Grissom and Alan Shepard. We sent them up, they arced through space and came back down, all in less than an hour. That’s what Galactic is going to do.”

“In terms of physical training, they do not mandate anything. But I think it’s a good idea to get as many space-like experiences as you can so on the real flight you can enjoy it. When you’re riding a rocket motor pulling 3 G’s or more, it’s pretty disorienting, a bit scary. Weightlessness, the first time you do it, is also unsettling.”

“I have done three supersonic flights: two in old Cold War-era fighter jets and one in the Concorde. I’ve also done the parabolic Ilyushin 76 weightlessness flight. I’m not a rich guy – I’m a journalist – and a $200,000 commitment to fly on Galactic – I got the old price because of when I bought my ticket – is a significant chunk of money. I want to get the most out of my 6 or 7 minutes of actual space time.”

SpaceFlight Insider: Take us through the flight. What’s going happen, and what do you most want to take away from the experience?

Jim Clash: “We will be carried aloft on the underbelly of a mothership, WhiteKnightTwo, from Mojave or the New Mexico Spaceport – 6 passengers and 2 pilots. When we get to 50,000 feet, they’ll jettison SpaceShipTwo, which we’ll be in, and it’ll drop until we clear the mothership. Then we’ll light the rocket motor. When that happens, we’re going to pull 3 Gs for maybe a minute and a half on the ride. Once we get to space, considered 100 km above Earth, the rocket motor will stop, the ship will arc over and we’ll be able to un-strap and float around the cabin.”

“You’re way above the atmosphere, so there’s no air to diffuse light, which is why the sky will be black. You’ll also be able to see the thin atmosphere hanging over the Earth, and obviously a lot of the planet’s curvature. For me, this overall view is most important. The weightlessness aspect is less interesting, having simulated it myself in an IL-76. It’s not that different from floating in water. I do remember some funny things when I was weightless, though. A little bag got away from me, and my immediate reaction was to breast-stroke toward it. Of course, I didn’t go anywhere in the air, but the bag kept moving (chuckle).”

SpaceFlight Insider: How does SS2 compare to the height of Joe Kittinger’s and Felix Baumgartner’s balloon jumps?

Jim Clash: “When Joe jumped from his balloon in 1960, he was 102,800 feet above the Earth. That’s about 20 miles, and we’re going about three-and-a-half times that high. Baumgartner jumped from 128,000 feet last year, so he was maybe one-third as high as we’re going. People say, “They jumped from space.” No way. When I did my MiG-25 flight, I was 84,000 feet above the Earth, 16 miles, and already you could see the blackness of space, the curvature of the Earth. In SpaceShipTwo, we’re going four times as high, so you can imagine what that will look like!” Jim Clash took this photo from 84,000 feet up in a MiG-25 Foxbat fighter jet. SpaceShipTwo will go at least four times as high, and the view will be even more spectacular! (Photo: Jim Clash)

SpaceFlight Insider: Do you have any desire to pilot?

Jim Clash: “I haven’t had the urge to do that, but I wouldn’t be averse to trying. In the MiG, we were in a trainer, so I had controls too. The pilot let me try a 360-degree roll. After he had flipped it around to the right, he had me do it to the left. It was like holding onto a vibrating stick and muscling it around. Then he wanted me to try again, this time to the right, but I was feeling a bit sick so I begged off. I also remember when we flew over South Africa in the Electric Lightning the pilot, the late Dave Stock, let me take the stick through the sound barrier. So, as I said, I have some familiarity with these sensations, all of which we’re going to experience on SpaceShipTwo but I’ve never ridden a real rocket motor, so that will be new!”

SpaceFlight Insider: Do you have fears?

Jim Clash: “Anybody who says they’re not afraid to do something like this either doesn’t get it, or might have a death wish. Sure I’m afraid. And, I have to say, before any of the extreme adventures I’ve done where my life is at stake I have fears. I also know intellectually that fear isn’t a good thing when you have to make quick and sensitive decisions – if you’re driving a racecar or climbing a mountain. Honestly, though, I’m usually more worried about things like weather, am I going to get sick, can I write a good story – those are things I fear.”

SpaceFlight Insider: You talk to a lot of astronauts. They know you’re going – what’s their advice?

Jim Clash: “Well, it’s different. Awhile back they were more like, “Jim, that’s never going to happen, and it’s ‘dangerous.’ Now, with SpaceShipOne having won the X Prize in 2004 and, more recently with SpaceShipTwo’s supersonic flight, I think even some of the hardened NASA astronauts are beginning to say, “You know this could work, this could happen.” Then there’s the other group that’s always been excited. Their advice is really two words: “the view.” Don’t worry about weightlessness, that will be cool. But it’s really the view you’re paying for. They also warn not to take this lightly – it is risky – and to make sure you prepare. To them, all of whom have done orbital flights, this is really no big deal. But to me, it’s huge. I’ve also asked them, “Would you do it if they gave you a free flight?” and most say, “Yeah, if they gave me a FREE flight.”

SpaceFlight Insider: What’s your own next big adventure?

Jim Clash: “When you achieve a big thing you always think, “That’s it.” I spent 12 years trying to interview the late Neil Armstrong and thought, “Boy, if I get Neil, I don’t need anyone else.” But when I did interview him, I then wanted to interview John Glenn. And on it goes. I still want to climb an 8,000-meter peak. I’m thinking Cho Oyu, the sixth highest mountain in the world at 26,906 feet. It’s technically “easy” as 8,000-meter peaks go – and it’s accessible. But a spaceflight is the ultimate because that’s what we baby-boomers dreamed about way back when Neil and Buzz were doing their thing.”

Jim Clash: “I probably come in here with the stereotypical answer – Neil Armstrong. Neil did it all for the right reasons. I write this “Right Stuff” column for AskMen and I’ve written two books about these special people. The “right stuff” is a combination of grace under pressure, doing it for the right reasons, the importance of the actual thing that you do, being humble, all of that. And I can’t think of anybody who did anything as significant who had all the right attributes.”

SpaceFlight Insider: Thanks for chatting with us today!

Jim Clash: “It was my pleasure!”

Note: In addition to her role with The Spaceflight Group, Stacey Severn is Social Media Coordinator with Neil deGrasse Tyson’s StarTalk Radio. This interview recently appeared as a guest blog on their website and can be viewed here: Ticket to Ride