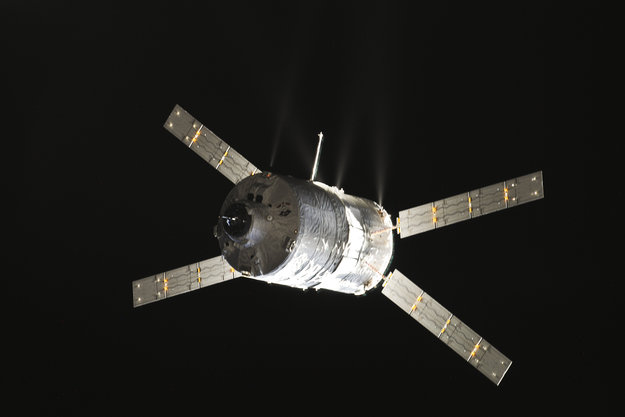 It’s all relative, you arrive and then you leave. Such is the case with the European Space Agency’s (ESA) Albert Einstein Automated Transfer Vehicle 4 or “ATV-4.” The soda can-shaped vessel is ready to undock from the International Space Station (ISS). ATV-4 has been loaded with trash and has been buttoned up in preparation of having flight controllers on the ground command it to conduct a destructive reentry over the Pacific Ocean. NASA Television will cover the spacecraft’s departure starting Monday, Oct. 28 4:45 a.m. EDT (ATV-4’s undocking is currently set for 4:59 a.m. EDT).

The Albert Einstein ferried some seven tons worth of cargo to the space station, this included the essentials that the orbiting laboratory needs to conduct research – fuel, food and other supplies. The cyndrilical craft, with its easily-recognizable x-wing configuration of solar arrays arrived at the station on June 15 of this year.

ESA astronaut Luca Parmintano spent most of Friday, Oct. 25 getting ATV-4 ready for its suicide run into the Earth’s atmosphere. As the station’s full name implies, most work on the ISS is a team effort. Parmintano was aided in closing ATV-4’s hatches by Expedition 37 flight engineer Oleg Kotov. Just a few days prior to the Albert Einstein’s departure, Orbital Sciences Corporation’s Cygnus 1 spacecraft was detached from the station’s Harmony module and directed to conduct a destructive reentry on Wednesday, Oct. 23. Photo Credit: NASA

There are several cargo-specific spacecraft that escape the bonds of Earth in order to deliver supplies to the ISS, of them all are what is known as “expendable” and are destroyed after their missions’ come to a close.  These include the Russian Federal Space Agency’s Progress, the Japanese Aerospace Exploration Agency’s HTV and Orbital Sciences Corporation’s Cygnus.

Orbital’s Cygnus-1, “David G. Low” spacecraft on its Orb D-1 flight under NASA’s Commercial Orbital Transportation Services (COTS) flight to the ISS was detached from the outpost on Oct. 22, it conducted its own fiery reentry on Wednesday, Oct. 23.

Cygnus, along with Space Exploration Technologies’ (SpaceX) Dragon spacecraft are based out of the United States, but are privately-owned (if not funded). Dragon, is unique, in that it conducts a splashdown in the Pacific Ocean and is described as reusable. This attribute, one that signals its potential for carrying crews to destinations in low-Earth-orbit, allows for experiments to be delivered to scientists waiting back on Earth to study the results

Both ESA and JAXA will only conduct a limited amount of supply runs to the ISS, this means that, in terms of resupplying the station, the U.S. and Russia will handle restocking ISS with the stores it requires to operate.

To date, ESA has launched four ATVs, the Jules Verne, Johannes Kepler, Edoardo Amaldi and the Albert Einstein. On April 2, 2012, ESA announced that there would only be one more ATV launched, it will likely fly sometime before 2015. ESA has expressed interest in moving away from efforts in low-Earth-orbit and toward crewed deep-space exploration efforts.