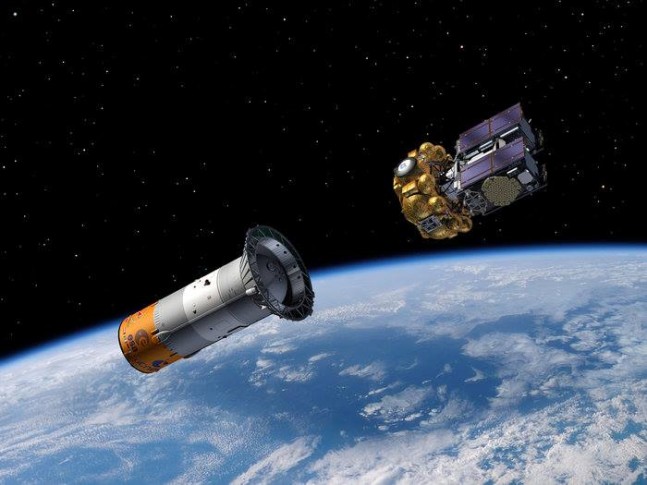 The first two functional satellites in the European Galileo constellation lifted off from Kourou, French Guiana at 9:27 a.m. local time (8:27 a.m. EDT, 1227 GMT) atop a Soyuz ST-B launch vehicle. Initially labeled a success, subsequent data shows that the satellites are in a lower-than-planned orbit. The European Space Agency initially claimed that all was well with the spacecraft, dubbed Doresa and Milena. However, it turns out that they fell short of the planned 14,600 mile (23,500) orbit planned for them. After a 24-hour launch delay, due to poor weather conditions, the Soyuz booster lifted off and the first part of the mission proceeded as planned. The satellites were released according to schedule, and signals were received indicating the satellite duo were functioning nominally. However, after separation, further analysis showed that the pair were not in their intended orbits.

The satellites were destined for a circular orbit, at a inclination of 55 degrees; however, they are currently in an elliptical orbit with an eccentricity of 0.23, at an inclination of 49.8 degrees. Preliminary analysis indicates there was an anomaly in the Fregat upper stage, resulting in the orbital discrepancy. Both satellites are being safely controlled and operated from the European Space Agency’s (ESA) Operations Center (ESOC) in Darmstadt, Germany.

Analysis is continuing in Kourou, French Guiana and at Arianespace’s headquarters in Evry, France under the direction of Stephane Israel, Chairman and CEO of Arianespace and in cooperation with Russian partners in French Guiana’a Soyuz program to investigate the anomaly and its implications for this mission.

“Our aim is of course to fully understand this anomaly,” Israel said. “Everybody at Arianespace is totally focused on meeting this objective. Starting Monday, Arianespace, in association with ESA and the European Commission, will designate an independent inquiry board to determine the exact causes of this anomaly and to draw conclusions and develop corrective actions that will allow us to resume launches of Soyuz from the Guiana Space Center (CSG) in complete safety and as quickly as possible. The board will coordinate its work with Russian partners in the Soyuz at CSG program.”

Israel went on to say, “Arianespace is determined to help meet the European Union’s goals for the Galileo program without undue delay. We would like to thank ESA, the European Commission and CNES for the very productive discussion since becoming aware of the occurrence of the anomaly. While it is too early to determine the exact causes, we would like to offer our sincere excuses to ESA and the European Commission for this orbital injection that did not meet expectations.” The primary components of the Galileo spacecraft were constructed by OHB, located in Germany. Photo Credit: ESA / Arianespace

Approximately ten minutes after launch, the Soyuz’s booster separated, leaving the responsibility of finishing the job of delivering the duo to their final destination to the Fregat-MT upper stage. This stage fired twice, propelling the satellites into what should have been a circular medium-Earth orbit. Orbital tracking data soon indicated the pair was flying in a lower orbit than was targeted.

Friday’s liftoff marked the ninth Soyuz rocket launch from the Kourou Spaceport since 2011. This was the first launch of a pair of fully-operational Galileo navigation satellites, and the start of a planned rapid-fire series of Soyuz and Ariane 5 launches to complete Europe’s version of the U.S. Air Force’s Global Positioning System (GPS). Safely encapsulated in their payload fairing were stacked with the Soyuz booster shortly after this image was taken. Photo Credit: Arianespace

After its completion, the Galileo network will have cost an estimated $7.2 billion and will contain a total of 30 satellites, needing 27 to function properly and will have three others serving as spares. Prior to Friday’s launch, ESA stated two additional Galileo satellites are currently being prepped for liftoff atop another Soyuz rocket in December of this year. An additional eight satellites are scheduled to launch on Soyuz or Ariane 5 rockets next year.

Upon reaching orbit, the satellites automatically deploy their solar panels in order to energize their batteries. Prior to the discovery of Friday’s anomaly, the satellites were expected to be fully operational by mid-November, joining the four demonstration satellites previously launched.

Didier Faivre, ESA’s director of navigation programs, stated that ground controllers received signals from the Galileo satellites after the launch, verifying they were operating after the ride into orbit. The duo are the first of a 30-strong fleet of spacecraft built by OHB System of Bremen, Germany to be sent into orbit. The European Commission, together with ESA, ordered the satellites in batches and signed a $397 million euro contract with Arianespace for five Soyuz launches, each carrying two satellites into orbit.

This past Wednesday, another contract was signed to launch the remaining 12 OHB-built Galileo satellites on three Ariane 5 rockets starting next year. Friday’s launch was supposed to mark the operational phase of the Galileo program, with the satellites expected to broadcast signals on three L-band frequency bands. The signals are designed for public needs, to assist European law enforcement, security uses, commercial needs, and emergency operations.

Stay tuned to Spaceflight Insider for future updates on the mission and what caused the anomaly.

As nearly as I can determine, this launch was at least the third in which a Fregat upper stage misbehaved, though the impact of this recent incident looks to be worst. It is apparently too early to determine for certain the origin of the error on the Galileo mission, but a 2006 mission to deploy the COROT space telescope and a 2007 mission to deploy four satellites for Globalstar both featured Fregat upper stages that suffered sub-optimal propellant pressurization due to leaky valves. Both prior missions were successful despite these problems. The Galileos don’t look to be as fortunate. All three of these missions were launched on Soyuz boosters, though the Fregat upper stage is also usable on the Zenit booster.

During this same 8-year period, at least six missions launched on Proton rockets and using the larger Briz-M upper stage have also failed because of defects in said stages.

The Russians have been somewhat snake-bitten by upper stages. I wonder if the reason why lies in the considerable complexity of their designs.

Thanks for the comment/explanation Dick, interesting information.