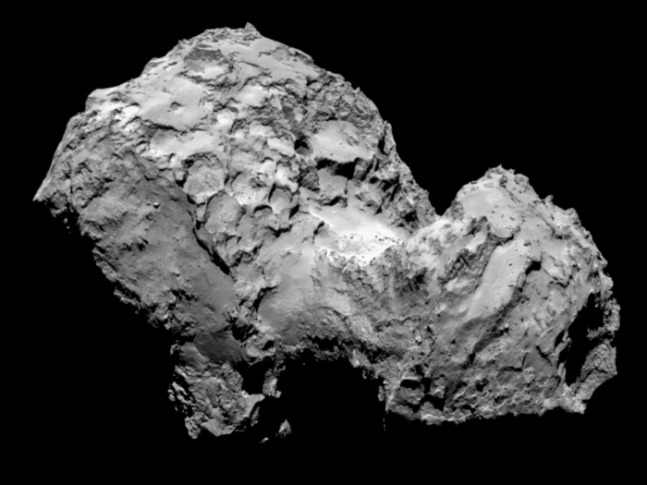 After a decade-long journey through the solar system, the European Space Agency (ESA)’s comet-chasing spacecraft, Rosetta, reaches its destination and earns the title of first spacecraft to rendezvous with a comet. Comets are the building blocks of the solar system, helping seed our planet with water and other ingredients necessary for life. However, these enigmatic icy bodies still hold many mysteries and with the help of Rosetta and her lander Philae, scientists hope to unlock all of the comet’s secrets. Comet 67P/Churyumov-Gerasimenko, or comet 67P for short, currently sits 251 million miles (405 million kilometers) from Earth — that’s equivalent to half the distance between Mars and Jupiter. Comet 67P is currently accelerating towards the Sun at a rate of 34,175 miles per hour (55,000 kilometers per hour). The comet is in the midst of a 6.5-year, elliptical orbit. Its furthest point or apihelion, Comet 67P’s orbit extends far past Jupiter, and back in to between the orbits of Earth and Mars for its closest (perihelion). The Rosetta spacecraft will spend the next year traveling with Comet 67P as it swings around the Sun and back out. First launched in 2004, Rosetta’s journey has not been the most straightforward or simple. Rosetta’s complex course included three gravity-assisted flybys of Earth, and one of Mars in order to help propel the spacecraft and keep it on the proper course needed to rendezvous with the comet. Along the way, Rosetta passed by the asteroids Šteins and Lutetia, testing out its cameras and providing us with unprecedented views and data.

“Europe’s Rosetta is now the first spacecraft in history to rendezvous with a comet, a major highlight in exploring our origins. After ten years, five months and four days traveling towards our destination, looping around the Sun five times and clocking up 6.4 billion kilometers, we are delighted to announce finally ‘we are here’. Discoveries can start,” sais ESA’s Director General Jean-Jacques Dordain.

Alvaro Giménez, ESA’s Director of Science and Robotic Exploration said “Today’s achievement is a result of a huge international endeavor spanning several decades. We have come an extraordinarily long way since the mission concept was first discussed in the late 1970s and approved in 1993, and now we are ready to open a treasure chest of scientific discovery that is destined to rewrite the textbooks on comets for decades to come.”

Earlier today, we saw the final maneuvers in a series of ten, beginning last May, to gradually adjust Rosetta’s speed and trajectory in order to align with the comet. This was a crucial part of the mission; if any one of these maneuvers had failed, Rosetta would have sailed by the comet and the mission would have failed. Scientists first got a glimpse of the target comet’s personality back in April of this year. Images captured by the OSIRIS camera from late April through early June revealed variable activity. The comet’s coma (surrounding envelope of gas and dust particles), rapidly increased in brightness and then died down over a six week period. During the same time, the Microwave Instrument for the Rosetta Orbiter (MIRO), took its first readings and discovered Comet 67P was emitting water vapor at a rapid rate.

The Visible and Infrared Thermal Imaging Spectrometer (VIRTIS), took the comet’s temperature and recorded an average reading of –94ºF (–70ºC). This figure indicates to scientists that Comet 67P’s surface is dark and dusty as opposed to clean and icy. When Rosetta approached the 7,456 mile (12,000 kilometer) mark, she surprised scientists revealing that Comet 67P’s nucleus had two distinct segments, connected by a ‘neck’. This duck-like appearance is attributed to the comet being a “contact binary” and could present issues when Rosetta’s Philae lander descends to the surface. Rosetta keeps beaming back more and more images of 67P’s double nucleus in greater detail. The most recent image will be released later this afternoon. “Our first clear views of the comet have given us plenty to think about,” said Matt Taylor, ESA’s Rosetta project scientist. “Is this double-lobed structure built from two separate comets that came together in the Solar System’s history, or is it one comet that has eroded drastically and asymmetrically over time? Rosetta, by design, is in the best place to study one of these unique objects.” Eventually, Rosetta plans to attempt a close circular orbit at a distance of 18.5 miles (30 kilometers). During this time, Rosetta’s scientific instruments will be busy taking multiple readings and providing  detailed observations of the comet as well as determining a landing site for Philae.

“Arriving at the comet is really only the beginning of an even bigger adventure, with greater challenges still to come as we learn hot to operate in this uncharted environment, start to orbit and, eventually, to land,” said Sylvain Lodoit, ESA’s Rosetta spacecraft operations manager.

By the end of the month, five potential landing sites will be identified, with the primary site selected in mid-September. Philae is expected to be deployed on November 11, but the final timeline and sequence of events will be determined by mid-October.

“Over the next few months, in addition to characterizing the comet’s nucleus and setting the bar for the rest of the mission, we will begin final preparations for another space history first: landing on a comet,” said Matt Taylor. “After landing, Rosetta will continue to accompany the comet until its closest approach to the Sun in August 2015 and beyond, watching its behavior from close quarters to give us a unique insight and real-time experience of how a comet works as it hurtles  around the Sun.”