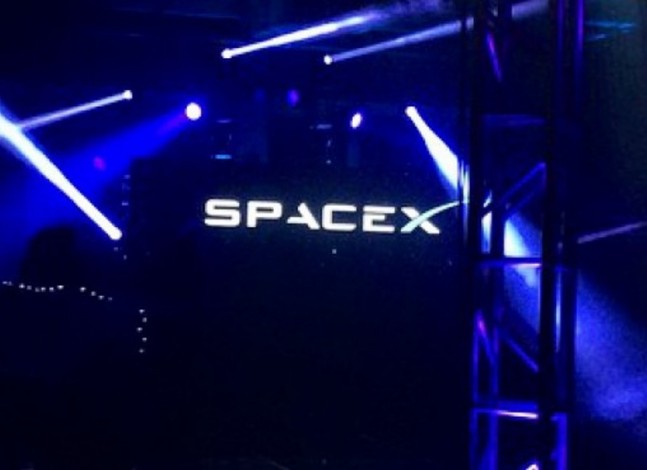 SpaceX logo behind the stage at the Dec. 13 holiday party. Photo Credit: Sairal via Instagram

It’s well known in the spaceflight community that employees of Space Exploration Technologies (SpaceX ) are expected to work hard. After this weekend, it appears that those employees are also capable of playing hard. On Saturday, Dec. 13, SpaceX held its annual holiday party in Hawthorne, CA. Many party-goers used social media to post photos, along with their thoughts and comments on the function. The word most commonly used was “epic.”

Twitter and Instagram posts depict, among other things, acrobats suspended from the ceiling, an indoor “train,” an indoor beach, a SpaceX logo constructed of a wall of doughnuts, a ball pit, an “unclean room” for “artistic expression,” a DJ and dance floor, casino games, and a glowing acrylic foosball table. An assortment of those posts are below: I’m sure ULA’s was just as much fun…

Doug, I think ULA was too busy launching rockets – you know, something SpaceX planned to do almost twice as much of this year according to their launch manifest, but had delay after delay and only got off a fraction of their projected launches….

and now we know why the upcoming launch was delayed: for the best reason! massive epic holiday party! not a good idea to launch while jet lagged and hungover. [the CC team has to get back to FL]

Doug Bookers comment made me laugh my a$$ off!

Well, that looks like classic Silicon Valley startup antics. A bit too Animal House for my tastes, but I guess we all ring in the holidays in our own way.

I’m sure it makes everyone’s holiday season brighter to see billionaires throwing lavish “lifestyles of the rich and famous” parties, after all, isn’t that “the reason for the season”?

Only at SpaceX! I wonder if any unfortunates woke up and found themselves welded inside of F9 propellent tanks or sitting inside sealed Dragons?

SpaceX has had amazing success and a flawless record. Their employees, who easily work 50+ hours every week, deserve to let loose and this looks like a lot of fun! They make SpaceX what it is. And keep in mind, the culture of this new age rocket company is NOT a ULA culture.

Mark… Are you sure that ULA was not too busy cleaning up that failed launch that happened 2 months ago???

Mr. Spock,
That was an Orbital Sciences Corporation rocket – not United Launch Alliance. Get your facts straight before posting a comment.

.. but your attack was factually wrong.

Anyway I agree, this was just one night party for people who work hard..

all the haters are jealous

Mr Spock… Mark and Steven are not the same people.

He can’t even tell the difference between ULA and Orbital – it shouldn’t be surprising that he gets Mark confused with Steven.

Wow people. Launch manifests were delayed for reasons such as: making sure the launch will be successful. Not bc of partying. Employees who work 80+ hours a week deserve a little fun.

Actually i think employees who work 80+ hours deserve to be paid for their overtime.

Looks like a blast. A well deserved party for all of the innovation going on at SpaceX. Soon you will have the only rockets in the world that can land and be reused. ULA and the rest of the rocket industry has some catching up to do. Party on!

I so want to work there; brutal hours, decimation of the lowest 10% or so workforce and all.

Ah, the Cult of Musk. Funny people taking pot shots at ULA. My experience with SpaceX dbags is that they spend more of their time taking digs at others than focusing on doing good work. What does that tell you? Any SpaceX employee who is honest would admit this behavior is the case.

I was given an offer at SpaceX and turned it down, the cult(ure) was way too obnoxious and everyone trying to one up another. There was one especially idiotic woman who even changed her middle name to Danger. Cringe much?! Her original initials were DAD; let’s just say she is no where near DDD. Heard later heard she had gone bezerk in the past at Raytheon and UCSB (sending out mass email rants). Maybe SpaceX fits her narcissism and anger issues better.

Looking forward to see some SpaceX failures in 2015.

Jason, I guess you are not Space X material. Space X is changing the industry. I wish I worked at Space X. They seem like hard working people by what they have accomplished and are accomplishing. You have a lot of hate by you looking forward to Space X failures. Wow!

Oh dear E=MC2 (it is MC^2, by the way), SpaceX would have been worse than the job where I was coming from and I took an offer someplace far better than both. I take pride in you saying I’m not SpaceX material, I’m in the industry for more than playing kiss-up or advertising that I work 80h/day. The mentality of people at SpaceX is somewhere approaching a high school popularity contest. You really have no clue, do you?

I can see you are a SpaceX fan boy; work hard and get an offer from them, and by all means do take it. It is folks like you that buy into their “changing the industry” mantra like a child in a candy store.

I don’t hate SpaceX, but considering the hypocrisy involved within that firm, I wish them no luck. By the way, SpaceX employees openly wish for failures of others’ launches and we’re celebrating after the Orbital failure; this is directly from insiders within SpaceX.

Jason, after the Orbital Sciences Antares launch failure, the people at SpaceX I know were crying at their desks, and calling up their friends at Orbital. Work had stopped to watch the Antares launch. What happened that day is that nightmare of every rocket person. You may be right about some of your criticisms, and you might be right about some SpaceX people, but I just can’t let that last comment slide without saying something. You know, they watch and cheer on ULA and Roscosmos launches too. (disclosure: I worked at SpaceX for several years.)

Best of luck at the university of Arizona I’m sure you’ll make Toys’R Us proud. Dork

Go SpaceX, and haters please keep hating. We all think it’s hilarious when folks try to discount what we’ve done. It’s like someone calling a me a cracker and expecting me to be offended.

Creating the most successful rockets in the Industry was not achieved by bashing other companies or their employees. I for one am impressed with the party that Space X presented for their employees and I am also thankful for the one that ULA presented to their employees. we are both tasked with the challenge of keeping the United States in space. Our Records and history will be how we are judged. ROLL-TIDE.

These comments are horrible. We as a space community need to take a step back and see the larger picture here. We are all reaching for the same goals, to advance the field of space exploration, why does it matter how one company does it. We should support each other.

Exactly, That why Elon has to file law suits and slander the other aerospace companies. So he can reach his goal of being a monolopy like the others. And make a killing on the SpaceX IPO.

I suppose it’s OK for SpaceX to have an extravagant party for their employees and have some scantily clad women dealing cards and hanging from the ceiling to entertain the engineers. Shows what they value about women during the holidays. But what are they celebrating? Being late to launch every time? Not meeting their launch manifest goals? Not being able to take the weight of cargo to the Space Station they promised? Being able to design a heavier, more complex booster that has landing legs that no customer has ever asked for? Not making a profit ever? Having a low performance second stage? Sounds like a reason to party!

No offense Jason, but by wishing SpaceX no luck, it is looking more like you hate them. Just show some respect.