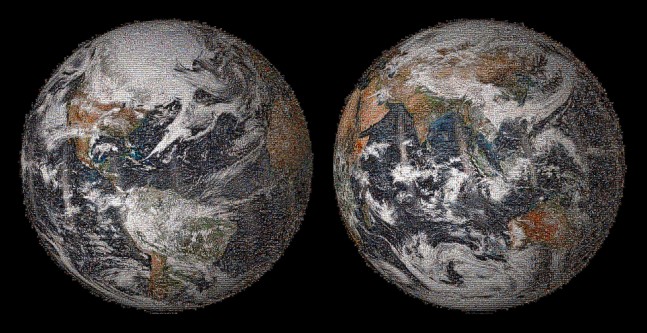 In celebration of Earth Day on April 22, NASA asked “Where are you on Earth Right Now?”  Receiving 36,422 individual photos from people on every continent, including 113 countires and regions, NASA created the “Global Selfie” mosaic which was released almost a month later. The photos were posted  with the tag #GlobalSelfie on popular social media websites Twitter, Instagram, Facebook, Google+ and Flickr.

“With the Global Selfie, NASA used crowd-sourced digital imagery to illustrate a different aspect of Earth than has been measured from satellites for decades: a mosaic of faces from around the globe,” said Peg Luce, deputy director of the Earth Science Division in the Science Mission Directorate at NASA Headquarters, Washington. “We were overwhelmed to see people participate from so many countries. We’re very grateful that people took the time to celebrate our home planet together, and we look forward to everyone doing their part to be good stewards of our precious Earth.”

The mosaic made by GigaPan is based on views of each hemisphere that were captured on April 22, 2014, by the Visible Infrared Imaging Radiometer Suite instrument on the Suomi National Polar-orbiting Partnership (NPP) satellite, a joint NOAA-NASA mission. The diagonal stripes in the images are due to the satellite capturing the reflection of sunlight off ocean waters. Suomi NPP, a joint mission between NASA and the National Oceanic and Atmospheric Administration, collects data on both long-term climate change and short-term weather conditions.

2014 is a critial year in NASA earth science. For the first time in more than a decade, five missions were dedicated to mapping out our home planet.  The first, the Global Precipitation Measurement mission’s Core Observatory, launched in February. Next up is the Orbiting Carbon Observatory-2 (OCO-2), launching from California’s Vandenberg Air Force Base on July 1. The Soil Moisture Active Passive mission will follow in November. RapidScat and the Cloud-Aerosol Transport System, two Earth science instruments, will be launched to the International Space Station.