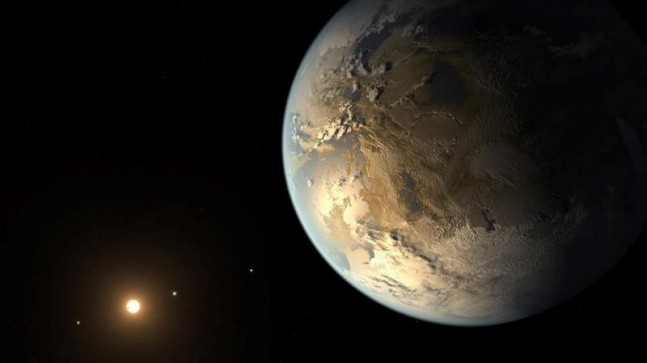 Today, astronomers working with the Kepler space telescope announced the discovery of the first Earth-sized exoplanet orbiting within the habitable zone of its host star. A star’s habitable zone is the area around a star where the conditions would be ideal for liquid water to pool on the planet’s surface. Many factors contribute to a planet’s habitability and simply being in “the habitable zone” does not guarantee the possibility of liquid water. The world, dubbed Kepler-186f (which orbits the star Kepler-186), is just one of five known worlds in this star’s planetary system, which is an estimated 500 light-years from Earth.

Previous exoplanet discoveries in the habitable zone of a star have revealed candidates that were either too hot or too large; however, the discovery of Kepler-186f proves to be potentially just right. As mentioned Kepler-186f is part of a five-planet system orbiting a red dwarf approximately 500 light-years from Earth in the constellation of Cygnus.

The four other worlds in the system – Kepler 186b, 186c, 186d, and 186e, orbit their parent star every four, seven, 13, and 22 days, respectively – are considered to be too hot to support forms of life as we know it. Much like Kepler-186f, each of these planets is slightly larger than Earth.

Red dwarfs or M dwarfs are the most common type of star and account for at least 70 percent of the stars in our galaxy. This seemingly ordinary star or one similar to it may just provide us with the prime opportunity to search for life beyond Earth. Kepler has been tasked with reviewing 145,000 stars to determine if exoplanets transit in front of them Image Credit: NASA

M dwarfs are the most abundant and potentially are host to the most common type of habitable world. However, the environments around these M dwarfs are quite different from the environment around our star, the Sun, making these worlds more like Earth cousins than Earth twins. Future NASA missions such as the Transiting Exoplanet Search Satellite (TESS) planned for launch in 2017 and the James Webb Space Telescope (JWST) launching in 2018 will target planets around M dwarf stars to study their composition and atmospheric conditions. Currently, astronomers know the size of Kepler-186f but cannot determine its composition. Models and previous studies suggest a planet the same size as Kepler-186f will be a rocky planet similar to the Earth.

Kepler-186f is located on the outer edge of the habitable zone, orbiting its host star once every 130 days. It is about 10 percent larger than Earth and receives about one-third the amount of energy we receive from the Sun. This still makes it a possible harbor for life. Many of the plants found in our rainforests are able to undergo photosynthesis even in extremely shaded areas. Since planet temperatures are determined by atmospheric conditions and M dwarf planets interact with their parent stars differently than the Earth interacts with the Sun, Kepler-186f could be receiving all the energy it needs, despite receiving less light than Mars does from the Sun. Only time and more observations will tell us if this new exoplanet is truly habitable.

“We know of just one planet where life exists – Earth. When we search for life outside our solar system we focus on finding planets with characteristics that mimic that of Earth,” said Elisa Quintana, research scientist at the SETI Institute at NASA’s Ames Research Center in Moffett Field, Calif., and lead author of the paper published today in the journal Science. “Finding a habitable zone planet comparable to Earth in size is a major step forward.”

Thanks very much for the job that you are doing. Well i have question that i need to ask, is this Kepler 186F using the sun that we have here in earth?