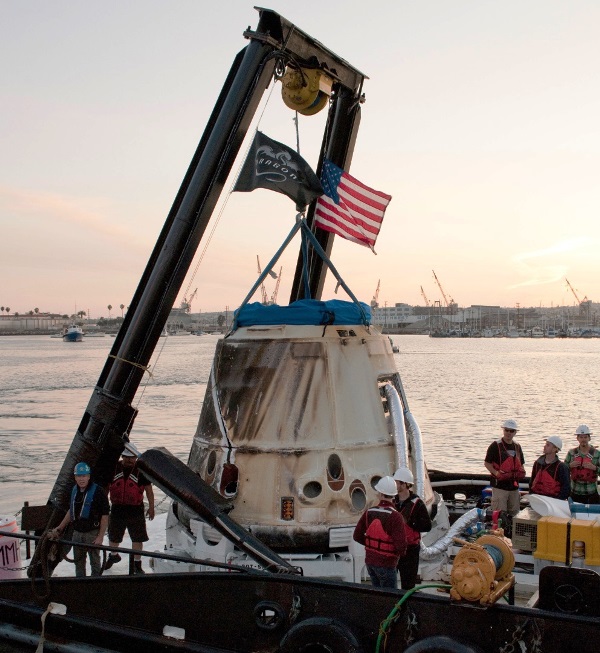 The Dragon spacecraft which conducted the CRS-3 mission to the International Space Station - safely arrives at port. Photo Credit: NASA

At approximately 9:26 a.m. EDT (1326 GMT) this morning, Space Exploration Technologies’ (SpaceX) Dragon spacecraft began “part one” of its six-hour return journey to Earth. After it was detached from the Earth-facing side of the Harmony module on the International Space Station (ISS). Dragon was then positioned alongside the orbiting laboratory (ISS) by mission control personnel at NASA’s Johnson Space Center in Houston using the Canadarm 2 robotic arm. Shortly thereafter, Dragon was released from the station. The spacecraft then initiated three thruster firings to maneuver away from the ISS. Dragon began its deorbit burn at approximately 2:10 p.m. EDT (1610 GMT) and splashed down in the Pacific near Baja, California not long after 3 p.m. EDT (1900 GMT).

Though this mission was the third of 12 contractual Commercial Resupply Missions (CRS-3) flights to the space station for SpaceX – it was the first to launch on the upgraded v1.1 version of the Falcon 9 rocket and thus carried the heaviest payload to orbit of any SpaceX launch to date. And while Dragon brought more than double its previous supplies on CRS-3’s April 18 launch, what it brings back to Earth is of equal importance. Unlike Russia’s Progress or Orbital Science’s Cygnus unmanned spacecraft, Dragon is the only automated payload delivery capsule servicing the International Space Station (ISS) designed to return intact. On this trip Dragon carried 3,563 pounds of cargo back to the ground (it brought up 4,600 pounds), including samples from human biology experiments, biotechnology studies, physical science research, and educational programing. Dragon’s unique cargo return abilities make it an invaluable asset to NASA scientists.

“While some of this data can be obtained by on orbit analysis, many analysis techniques have not been miniaturized or modified to allow them to be performed on orbit, which means sample return is the only way to obtain this data,” said Marybeth Edeen, the space station’s research integration office deputy manager. A dark plume which was seen racing up the side of the Falcon 9 was identified by Elon Musk as being little more than dirty water that was turned into steam at liftoff. Photo Credit: Carleton Bailie / SpaceFlight Insider

In order to recover the Dragon, two boats were placed into the planned splashdown zone where the Dragon was expected to arrive. One of which, the 100-foot American Islander, is equipped with a crane which was used to lift the Dragon out of the salty Pacific. The other vessel collected the Dragon’s telemetry. On hand were 100 or so SpaceX engineers as well as a dive team to prepare the Dragon to be collected.

While the return to Earth was a success, CRS-3 suffered a number of recent launch setbacks in mid-March and early April that resulted in yet another delay (this mission had been slated to begin in April of last year) of the company’s third resupply mission under the $1.6 billion agreement the company has with NASA. On March 13 SpaceX announced it would be delaying the launch for at least two weeks because of an issue with the United States Air Force’s 45th Space Wing range radar. The next launch attempt, on April 14 was scrubbed after a helium leak was detected.

Just days before the April 18 launch, a glitch on an ISS instrument responsible for a number of backup services on the exterior of the Station raised concerns of yet another delay. Not long after a resolution was found, mission control became concerned about deteriorating weather conditions. Nevertheless, the launch did go through and was completed successfully. The Dragon that conducted the SpaceX-3 mission is seen in this NASA TV image shortly after deploying from the Falcon 9 v1.1 launch vehicle on April 18. Image Credit: NASA Television

This mission saw a wide range of scientific experiments and equipment flown to the space station. The most interesting aspect was, perhaps, the space “legs” which were developed for the anthropomorphic Robonaut 2 to allow it to handle dangerous or mundane tasks rather than station crewmembers. Also being ferried aloft by Dragon was the Vegetable Production System (VEGGIE) as well as the Optical Payload for Lasercomm Science (OPALS) – which will test out new space-based communications systems. In short, SpaceX-3 saw a wide-range of scientific experiments, replacement parts as well as cargo for the Expedition 39 and 40 crews delivered to ISS. SpaceX’s Dragon spacecraft as it was seen on its approach to the International Space Station. Photo Credit: Expedition 39 / NASA

Another noteworthy feature that conducted its first test on the CRS-3 mission, was the landing legs affixed to the first stage of the Falcon 9 v1.1 rocket. While the stage was set to land in the Atlantic Ocean during the April 18 launch, rough seas at landing saw little of this system salvaged. However, enough of the system was returned to confirm that SpaceX conducted the first ever soft landing of a rocket’s boost stage during an actual mission. SpaceX is working on a system to coordinate a controlled return of the rocket section to its original launch site and used the SpaceX-3 launch as an opportunity to collect more data on how such a process would work.

Both the successful launch and recovery of SpaceX-3’s first stage signal the continued progress of the SpaceX team in developing new technology with each launch. The fourth SpaceX CRS launch is scheduled to take place on August 8 of this year. On June 10 Orbital Sciences Corporation, the other company awarded a CRS contract, is scheduled to launch the second of its nine planned Commercial Resupply Missions aboard the Cygnus spacecraft.

“The space station is our springboard to deep space and the science samples returned to Earth are critical to improving our knowledge of how space affects humans who live and work there for long durations,” said William Gerstenmaier, associate administrator for human exploration and operations. “Now that Dragon has returned, scientists can complete their analyses, so we can see how results may impact future human space exploration or provide direct benefits to people on Earth.”