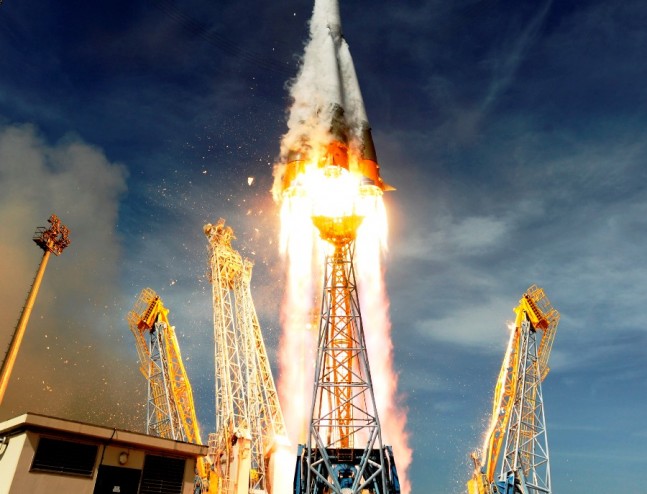 The skies above the Spaceport located at Kourou, French Guiana greeted a new star this morning as a Soyuz ST-B booster and its payload of the Doresa and Milena Galileo satellites to orbit. The flight began 24 hours later than originally planned with liftoff taking place on Friday Aug. 22 at 1227 GMT (8:27 a.m. EDT; 9:27 a.m. local time). The reason for the delay was poor weather conditions at the launch site carved out of the jungles in French Guiana.

Located off the northern-east coast of South America the Guiana Space Center is the spot from which the commercial space-firm Arianespace conduct all its launches from. It served as the perfect backdrop for the start of Europe’s first civilian orbital navigation system.

“It was a wonderful [launch] campaign; you’ve seen the spirit of the team, which was perfect. We’re in good hands…and we’ll be back with the 20 satellites that are ahead of us to launch,” said Didier Faivre, ESA’s Director of the Galileo Program and Navigation-Related Activities. The two Galileo navigation satellites are Europe’s answer to the U.S. GPS and Russian GLONASS systems. The spacecraft that were sent into the skies were given the names Doresa and Milena, dubbed so by the names of children who were the winner of a drawing contest. Today’s spectacular launch – actually saw its start a little more than two weeks ago.

Both spacecraft were topped off with propellant on Aug. 7-8. This fuel will allow the satellites to both maintain and adjust their orbit as well as to ensure that they keep the correct altitude. Once a satellite is on orbit, it cannot pull over at a gas station when the fuel tank is low. Therefore all the fuel that they will ever need – must be loaded onboard prior to launch. This takes extra-added interest when one considers that the duo have planned mission lives of at least 12 years.

Each of the two satellites that launched today weighs about 1,609 lbs (730 kg) when they are fully loaded with fuel. “Doresa” and “Milena” – the first two of the 30-strong Galileo fleet – take their place in the heavens in this artist’s illustration. Image Credit: P. Carril / ESA

The Galileo spacecraft were loaded onto their flight dispenser on Aug. 11. This device connects the payload, in this case the duo, to the Fregat upper stage of the Soyuz booster.  These will not be the third and fourth satellites to be sent aloft under the Galileo system.

Now that they are on orbit, they will join four other Galileo satellites which were launched in 2011 and 2012. These spacecraft were also launched atop a Soyuz rocket. These satellites also did not mark the start of the development of this system.

Two Galileo In-Orbit Validation Experiment or “GIOVE” spacecraft were launched to validate the concepts of the system as well as to secure frequencies which would fly on the constellation with the International Telecommunications Union. GIOVE-A was launched in 2005, with GIOVE-B taking flight three years later in 2008. Having fulfilled their mission parameters the two spacecraft have since been retired and placed into a 14, 802 mile (23,822 km) high “graveyard orbit.”

After GIOVE was completed the first four spacecraft to be launched, were still not ready to provide navigational services however. Now, Europe is ready to begin that effort in earnest. It is hoped that with the two satellites launched today that”Full Operational Capability” – can begin.

The In-Orbit Validation or “IOV” phase of the program was accomplished by the first four satellites sent to orbit after GIOVE was complete. Galileo now stands ready to move on to the Initial Operational Capability (IOC). This should begin around 2015. Once the IOC phase is accomplished Europe will work to provide additional services to consumers. Once these services begin, the Full Operational Capability (FOC) phase of the Galileo Program will have begun.

Galileo, like the U.S.’ GPS and Russian GLONASS systems, is used to provide navigational services to users on the ground, in the air and at sea and is designed to be inter-operable with both of the Russian and U.S. systems.

The Galileo system will provide services in two frequencies, deliver real-time positioning down to just three feet (1 meter) warn users of any outage of services prior to it taking place.

As noted in SpaceFlight Insider’s pre-launch article, Galileo is also designed to serve as a global Search and Rescue or “SAR” resource. The system is based off of the Cospas-Sarsat system and therein are equipped with transponders. This enables these spacecraft to relay distress signals from users’ transmitters to local rescue centers. Another signal will also be sent to the user, letting them know that their signal has been detected – and that help should be on the way. According to statements appearing on ESA websites, this is a service not currently provided by existing systems.

ESA describes Galileo as being the first, completely civilian positioning and navigation system. This makes it different from the military-based systems that came before it. The Galileo navigation system is a joint project between ESA and the European Commission, the executive body of the European Union.

Fully-equipped, the $7.2 billion fleet should consist of 30 satellites, 27 of which will be active with the remaining three serving as spares. The satellites will operate in medium-Earth-orbit (MEO) in three circular orbits at an orbital inclination of 56 degrees. Galileo will provide services at latitudes of about 75 degrees north. This is important for Europe as it will encompass Europe’s most northern tip – Norway’s North Cape.

Over the course of the next few years, two additional Galileo spacecraft will be sent to orbit via Soyuz rockets and four more via Arianespace’s Ariane 5 launch vehicle.

The “Full Operational Capability” phase is managed and funded by the European Commission, they, along with ESA, have entered into an agreement wherein the European Space Agency serves to design the spacecraft as well as acquire the needed components to build the fleet. To support this growing system, Europe has established two Galileo Control Centres (GCCs ). These ground stations both control Galileo as well as perform navigational mission management. The data that is produced by the network of Galileo Sensor Stations, which stretches across the world, will be relayed back to the GCCs via uplink stations. This information will be used to synchronize ground station clocks.

The elements which will generate the navigational signals back to the ground were built by Surrey Satellite Technology Ltd., located in the United Kingdom. The primary structures of the satellites themselves were built by OHB in Germany.

On Aug. 15, the assembled payload fairing, which included the Galileo spacecraft and their dispenser was attached to the Fregat upper stage. They were then enclosed in the payload fairing which covers the satellites on ascent. This uppermost section of the full stack is called the “space head.” Just a few days prior to the Aug. 22 launch date, the fully “stacked” rocket was ready for launch.

The Soyuz 2-1b or “Soyuz ST-B” launch vehicle which carried out today’s flight, called “Soyuz Flight VS09” – is a derivative of the venerable Russian rocket. While the rocket’s exterior looks virtually identical to the older versions of the rocket – it has an array of modifications meant to bring the iconic rocket into the 21st century. These include a digital control system, an upgraded RD-0124 rocket engine as well as a 13.4 feet (4 meters) “ST” (hence the name) payload fairing. The Soyuz ST-B was assembled in the horizontal integration building or “MIK.”

The rocket was rolled out to the 2,300-foot (700 meters) from the Horizontal Integration Hangar to the Spaceport’s launch site this past Monday. Once there, it was hydraulically lifted from the horizontal to the vertical position. Once there, the rocket had the mobile gantry put in place around it in preparation for the arrival of its cargo.

After launching from French Guiana, the Soyuz rocket’s three core stages will boost the satellites and the Fregat-MT upper stage on a suborbital trajectory in the first 9 minutes of the mission.

The Soyuz launch site at the Kourou Spaceport utilizes elements that have been used at Baikonur Cosmodrome for decades. The Soyuz ST-B serves as a medium-lift rocket with the Ariane 5 falling in under a heavy and the Vega falling in as a light-to-medium class launcher. The vehicle assembly building is similar in layout to those at the Baikonur and Plesetsk Cosmodromes, As at these sites, the launch vehicle is assembled horizontally and then rolled out to the pad. and configured to allow for horizontal vehicle assembly before rolling out to the pad.

“Arianespace and Soyuz have now provided new momentum to the Galileo constellation with the launch of the first two Full Operational Capability satellites,” Arianespace Chairman and CEO Stéphane Israël said.