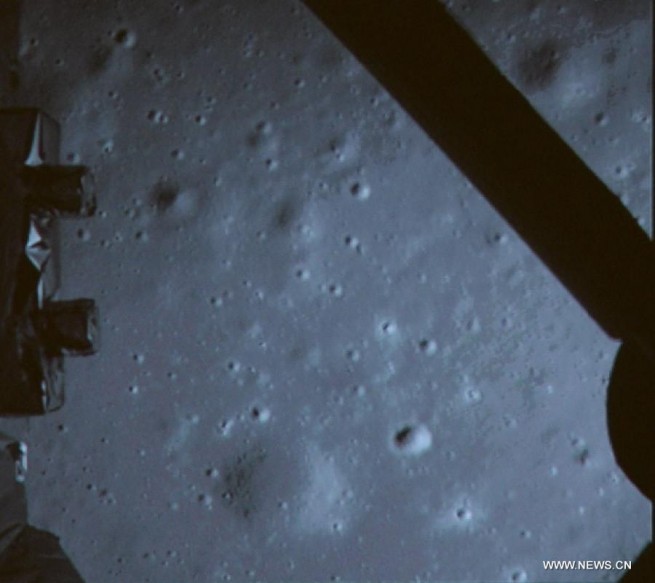 A photograph taken by the descent camera onboard Chang'e 3, moments prior to the lunar lander's historic soft-landing on the flat plains of Sinus Iridum. Photo Credit: Xinhua.net/CCTV

In what could be considered a historic day for spaceflight, the Chinese Chang’e 3 lunar lander carrying the Yutu rover onboard, successfully soft-landed on the Moon today, at 8:11 a.m. EST (1311 GMT), within Sinus Iridum, or the “Bay of Rainbows.” This feat represents a historic achievement for China, which became just the third nation after the U.S. and former Soviet Union to successfully soft-land a spacecraft on the Moon. It is also the first landing on the Moon ever attempted since the former Soviet Union’s Luna 24 succesfull touch-down on Mare Crisium, in August 1976.

Chang’e 3 represents the beginning of the next phase of the Chinese robotic lunar exploration program. Following the succesful missions of the Chang’e 1 and 2 lunar orbiters in 2007 and 2010 respectively. Chang’e 3 marks the beginning of the next 5-year chapter of the Chinese space agency of robotic landers and rovers. Chang’e 3 will be followed by a similar lander mission, Chang’e 4 in 2015, while in 2017, China plans to launch a sample-return mission, following closely at the footsteps of the U.S. and Russia. Following an impressive night launch atop a Long March 3B rocket and a 14-minute ascent to orbit on December 1, Chang’e 3 completed the first milestone of its mission, by successfully conducting a Trans-Lunar Insertion Burn or “TLI,” that put it on the right path towards the Moon. The spacecraft spent the following 5 days coasting through cislunar space, while establishing communications with Earth by achieving the proper 3-axis stabilisation control, and executing two  Trajectory Correction Maneuvers, or TCMs. These occurred within two consecutive days after launch, on Dec. 2 and 3 respectively, and were required to adjust Chang’e’s flight path and correct for any inaccuracies prior to Lunar Orbit Insertion. A third TCM was originally planned, but was later scrubbed as it was deemed unnecessary.

Tracking and communication with the spacecraft throughout its cruising phase, was primarily accomplished by two big radio dishes in mainland China, specifically built for deep-space tracking applications. One 115 foot (35-meter dish), which is located at the city of Kashgar in the Xinjiang Region, near the Tajikistan borders, and a 213 foot (65-meter) dish, located at the city of Jiamusi in the Heilongjiang province in northeast China, near the Russian borders. The European Space Agency (ESA) also provided a communications relay link and tracking support, via its 49 foot (15-meter) ground station in French Guiana, South America, and its Estrack network. Estrack is comprised by a system of ten tracking stations in seven countries, headquartered at the Estrack Control Centre in ESA’s European Space Operations Centre, in Darmstadt, Germany. These dishes will be the primary means of communication with Chang’e throughout the whole duration of its mission as well.

Five days after launch, the spacecraft ticked off the next major milestone in its mission, by successfully arriving in lunar orbit on December 5, following a 6-minute Lunar Orbit Insertion, or LOI burn. The burn allowed Chang’e to decelerate enough to be captured by the Moon’s gravity, placing it in a 100 km-high circular polar orbit. Once safely in orbit, Chang’e initiated an instrument commisioning phase to check that all of its functions were nominal and completed a 4-minute orbital adjustment manuever on December 10, changing its lunar orbit from a circular, to a 100km by 15 km elliptical one. This orbital adjustment was crucial, so that the lander could adjust and line up its periselene (the point in its orbit closest to the Moon) to 15 km precisely over Sinus Iridum, and allow the spacecraft to initiate its landing sequence four days later.

Although Chang’e could have landed right after this orbital adjustment, scientists on Earth wanted to wait for the Sun to rise over the landing site, so that the spacecraft had a full 14 days worth of science operations. Although the Chang’e lander is equipped with a Radioisotope Thermoelectric Generator or RTG, it can only conduct science operations throughout lunar day, through the power provided by its two solar panels. The RTG is primarily used for powering up the lander’s Electric Resistance Heaters, that will be used to protect the spacecraft from the cold and harsh temperatures of the lunar night, which can typically dip below -170 degrees Celsius. With the Sun rising over Sinus Iridum on December 13, Chang’e was set for its rendezvous with history. The ambitious landing sequence, included a carefully planned 7-phase, 12-minute deceleration burn, using the spacecraft’s variable-thrust main engine, coupled with a series of altitude control and re-orientation manuevers. One orbit shorter than previously planned, and while Chang’e was flying over its landing site, the main engine ignited, breaking the spacecraft from its 15 km-high orbit, and starting its descent to the surface. With this first leg of the landing sequence complete, Chang’e had already descended to an altitude of 2 km above the lunar soil.

At that point, the lander’s descent camera and laser-ranging instruments were tuned on, allowing the spacecraft to gather data on its altitude and velocity. Meanwhile, its fully autonomous navigation system performed a re-orientation manuever, adjusting the lander to a near-vertical position during the final moments of descent. During the final leg of its landing sequence, Chang’e started hovering at an altitude of 100 meters above the surface, so that the descent camera could photograph the landing site. It took 59 photos during the landing sequence, which was carried live by the China national TV. These pictures are to be later used by mission planners, for calculating the Yutu rover’s best possible route on the lunar surface.

With the imaging of the landing site complete, the big moment for the lunar lander had arrived. Descending from its hovering altitude of 100 meters, the main engine initiated a constant throttling down, until it shut off, at an altitude of 4 meters above the lunar regolith. With most of its vertical velocity flown out by the descent burn and taking advantage of the weaker lunar gravity, the lander made a quiet free fall, gently resting on the lava-filled plains of Sinus Iridum, at 8:11 a.m. EST. Ending a 37 year-old break, China was ready to begin a new chapter of lunar surface exploration, while cheers erupted all over the mission teams at the Beijing Aerospace Control Center, and ESA’s Estrack Control Centre in Darmstadt, Germany.

After initial check-outs are complete, the Yutu rover will be deployed on the lunar surface several hours after landing. If everything goes according to plan, both Chang’e and Yutu will take pictures of each other, prior to the rover’s excursion on the lava-filled plains of Sinus Iridum.

[UPDATE (Dec 14., 2013 at 18:07 EST): The Yutu rover has been successfully deployed from the lander on the lunar surface, at approximately 12:40 PT today, marking the start of a 14-day period of science and roving operations. The rover deployment was carried live by China’s national TV network CNTV, which later released the video, on the network’s internet page].

The Chang’e 3 lander, has a suite of 7 scientific instruments and cameras onboard. These include a set of three panoramic cameras allowing for stereoscopic vision, a descent camera used for the Chang’e landing sequence, and a nadir-facing camera. Other notable instruments include an ultraviolet telescope, for astronomical observations in the far-ultraviolet from the surface of the Moon, and a far-ultraviolet camera, for making observations on the interactions between the Earth’s ionosphere and geomagnetic field. The Yutu rover for its part, is equipped with instruments that include a ground-penetrating radar, capable of probing down to 100 meters from the lunar surface, and two spectrometers. The one is called the Alpha Particle X-Ray Spectrometer, which is mounted onto the rover’s robotic arm. It will be used for examining the chemical composition of the lunar regolith and rocks. The second is called the Visible/Near-Infrared Imaging Spectrometer, and is designed to characterise the abundance of lunar minerals and resources in the lunar soil. I’m uncertain as to how China views its space program in the long run. Of course, in the near-term it’s driven by geopolitics and its desire to make its case as a superpower to the rest of the world. On the other hand, statements constantly made by Chinese space officials, indicate China’s willingness to find and exploit lunar resources for a future human presence on the Moon. And the Yutu rover is equiped with a penetrating radar to search for these resources underground. So it seems that China eyes a more permanent human presence on the Moon in the future. If that’s the case, and I believe it is, the US should watch out and put its act together, as to not be left behind.