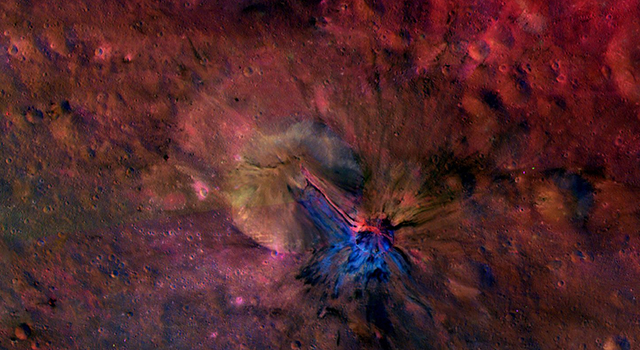 This colorful composite image from NASA's Dawn mission shows the flow of material inside and outside a crater called Aelia on the giant asteroid Vesta. The area is around 14 degrees south latitude. The images that went into this composite were obtained by Dawn's framing camera from September to October 2011. Image credit: NASA/JPL-Caltech/UCLAMPS/DLR/IDA

Some beauty is revealed only at a second glance. When viewed with the human eye, the giant asteroid Vesta, which was the object of scrutiny by the Dawn spacecraft from 2011 to 2012, is quite unspectacular color-wise. Vesta looks grayish, pitted by a variety of large and small craters.

But scientists at the Max Planck Institute for Solar System Research in Katlenburg-Lindau, Germany, have re-analyzed the images of this giant asteroid obtained by Dawn’s framing camera. They assigned colors to different wavelengths of light and, in the process, revealed in unprecedented detail not only geological structures that are invisible to the naked eye, but also landscapes of incomparable beauty.

Researchers at Max Planck can now see structures such as melts from impacts, craters buried by quakes and foreign material brought by space rocks, visible with a resolution of 200 feet (60 meters) per pixel.

“The key to these images is the seven color filters of the camera system on board the spacecraft,” said Andreas Nathues, the framing camera team lead at Max Planck. Since different minerals reflect light of different wavelengths to different degrees, the filters help reveal compositional differences that remain hidden without them. In addition, scientists calibrated the data so that the finest variations in brightness can be seen.

In the new colorized images, different colors indicate different materials on the surface of Vesta. They reveal impressive formations and a wide range of geological diversity, said Nathues. But above all, the color-coded images are impressive because of their beauty.

“No artist could paint something like that. Only nature can do this,” said Martin Hoffman, a member of the framing camera team also at Max Planck. Pictures of the crater Aelia, the crater Antonia and an area near the crater Sextilia show some of Vesta’s most impressive sites.

Dawn visited Vesta from July 2011 to September 2012. The spacecraft is currently on its way to its second destination, the dwarf planet Ceres. Ceres is the largest object in the main asteroid belt between Mars and Jupiter.

The Dawn mission to Vesta and Ceres is managed by NASA’s Jet Propulsion Laboratory, a division of the California Institute of Technology in Pasadena, for NASA’s Science Mission Directorate, Washington. UCLA is responsible for overall Dawn mission science. The Dawn framing cameras were developed and built under the leadership of the Max Planck Institute for Solar System Research, Katlenburg-Lindau, Germany, with significant contributions by DLR German Aerospace Center, Institute of Planetary Research, Berlin, and in coordination with the Institute of Computer and Communication Network Engineering, Braunschweig. The framing camera project is funded by the Max Planck Society, DLR and NASA.

More information on Dawn is available at: http://www.nasa.gov/dawn and http://dawn.jpl.nasa.gov