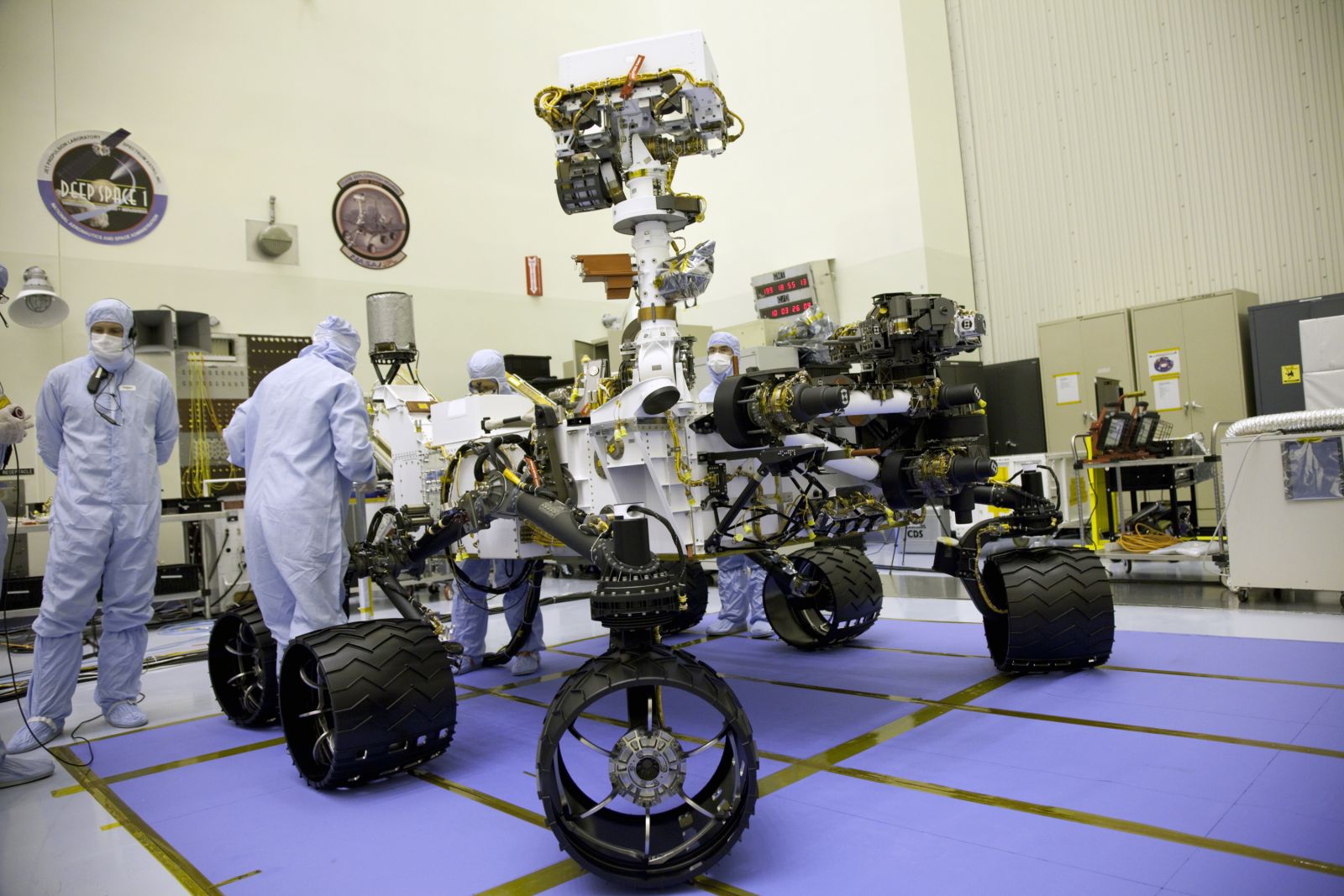 Curiosity has been on the surface of Mars since August of 2012. Photo Credit: NASA

The rover landed in Gale Crater on Aug. 5, 2012. This location was chosen after NASA’s Mars Reconnaissance Orbiter (MRO) detected signals of clay at the site, a sign that lakes and streams flowed there billions of years ago. Its mission was to determine whether the planet was once habitable for microbial life, before its climate changed from warm and wet to cold and dry.

Curiosity‘s study of rocks within the 96-mile- (154-km-) wide Gale Crater confirmed it once hosted a network of lakes and streams that could have been habitable for as long as several hundred million years.  Over that time, clay minerals were left behind as a result of water interacting with sediment in those lakes and streams.

Unlike NASA’s earlier, solar-powered rovers Spirit and Opportunity, which landed on Mars in 2004, Curiosity runs on nuclear power via a multimission radioisotope thermoelectric generator (MMRTG), meaning it is far less vulnerable to dust storms, which can prevent solar-powered rovers from recharging, causing them to lose power.

Curiosity has been in an extended mission since its primary mission was completed within one Martian year, which equals approximately two Earth years.

Early in its travels within Gale Crater, the rover traveled over gravel and pebbles, terrain too small for drilling. Currently in a high-clay content region along Mount Sharp, the rover has since drilled into the crater’s surface 22 times, Although the drill ran into problems on several occasions, mission engineers successfully came up with innovative techniques to work around these problems. 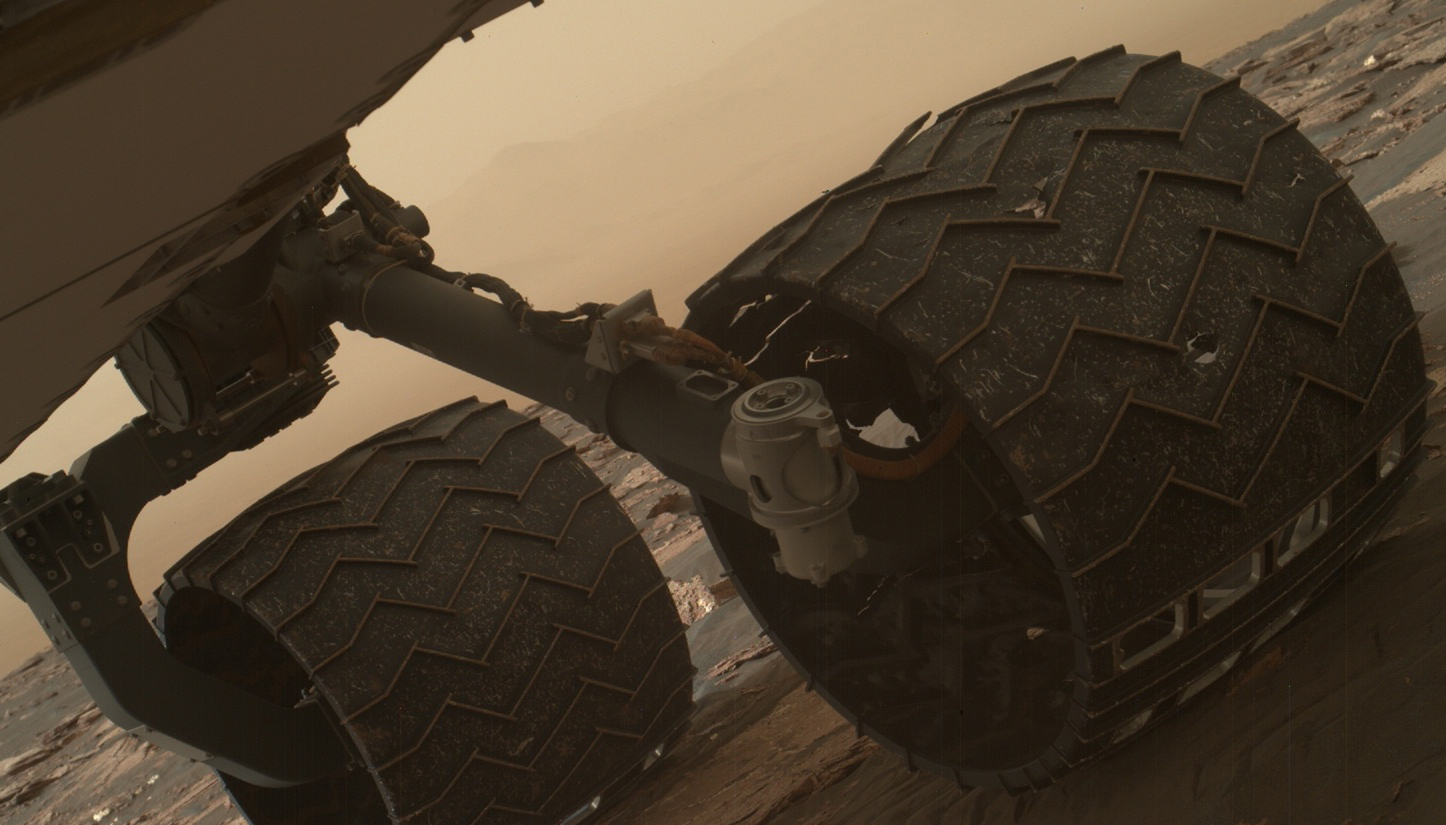 Curiosity broke two of the raised treads, called grousers, on its left middle wheel in the first quarter of 2017. This included the one seen partially detached on the top of the wheel in this image from the rover’s Mars Hand Lens Imager (MAHLI) camera on the rover’s arm. Photo Credit: NASA/JPL-Caltech/MSSS

Since June of this year, Curiosity has been traversing more complex geological terrains, including “Strathdon,” an area made up of hardened sediment layers. Significantly different from the flatter, thinner layers the rover previously encountered, this region could have been shaped by a combination of both flowing water and wind.

“We’re seeing an evolution in the ancient lake environment recorded in these rocks. It wasn’t just a static lake. It’s helping us move from a simplistic view of Mars going from wet to dry. Instead of a linear process, the history of water was more complicated,” stated Valerie Fox of Caltech, co-lead of Curiosity‘s clay unit campaign.

The rover is now exploring the clay-rich side of Mount Sharp initially detected by MRO from orbit. Drilled samples there have revealed some of the highest levels of clay minerals Curiosity has found on the Martian surface. However, in a mystery that continues to stump scientists, samples taken from other regions on Mount Sharp, where MRO did not detect large amounts of clay, show similarly high clay levels. One theory is that dust present on the latter, flatter terrain obscured clay signals there far more than it did on the former, which is covered in pebbles.

Recently, Curiosity detected high levels of methane in some parts of Gale Crater’s atmosphere. On Earth, atmospheric methane is produced largely through biological processes, especially by microbes. But methane can also be produced by geological processes, specifically, interaction between hot water and rock, so the presence of the gas does not amount to proof of life.

Curiosity has enough power remaining to operate for approximately another seven years and remains in good health.