Rosetta discovers target comet – is actually two comets in one 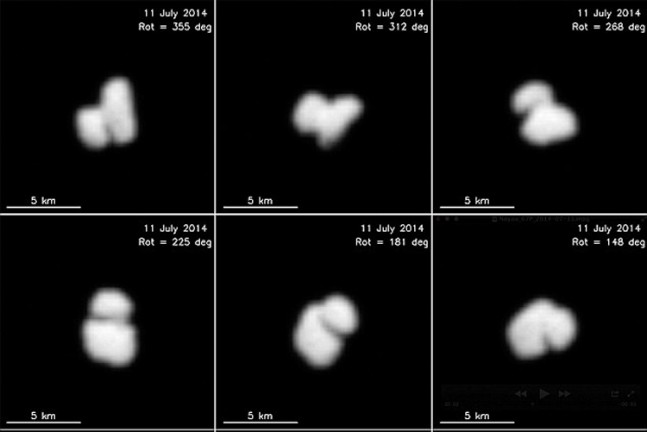 The European Space Agency (ESA ) spacecraft Rosetta is rapidly closing on its target – comet 67P/Churyumov-Gerasimenko – at the start of what promises to be one of the most exciting space exploration missions of the year. Space exploration, like life – is what happens while you are making other plans. Three weeks before Rosetta is scheduled to enter orbit around 67P/C-G it has already made a startling discovery: the nucleus of this comet consists of not one object but two. In essence, the Rosetta’s target – is better described as “targets.”

Launched on March 2, 2004 atop an Ariane 5 rocket from the spaceport at Kourou, French Guiana, Rosetta has used three Earth flybys and a very close swingby of Mars ( in 2007), at a distance of just 160 miles (257 kilometers), to hurl it on course for 67P/C-G, which is currently about 370 million miles (595 million kilometers) from the Sun. En route it has already encountered two asteroids – 2867 Steins in September 2008 and 21 Lutetia in July of 2010. But the main attraction lies ahead. If all goes well, Rosetta will become the first spacecraft not only to orbit a comet’s nucleus but also to place an instrumented probe on its surface. Now, however, that nucleus turns out to be not quite what scientists had anticipated. The latest pictures from Rosetta suggest the nucleus of 67P/C-G consists of two bodies touching one another – what astronomers refer to as a “contact binary.” That should inject further interest into the mission because researchers will want to know the exact nature of these objects and how they came to be joined in this way.

It may also add somewhat to the complexity of the mission, firstly because of perturbations to Rosetta’s orbit due to the unusual mass distribution, and secondly because the usual configuration will present an additional challenge to the approach and landing of the Philae probe, which, on November 11, will attempt to become the first human-made object to soft-land on the surface of a comet’s nucleus.

Every few days, on this final approach to 67P/C-G, Rosetta’s thrusters will fire to slow the spacecraft’s rate of approach, in preparation for orbital insertion in the first week of August. After catching up with the comet, Rosetta will slightly overtake it and go into orbit from ahead of its target as both the spacecraft and 67P/C-G move along their paths around the Sun. A series of intricate maneuvers will then see Rosetta reduce its distance from the comet from about 60 miles (96 kilometers) to less than 20 miles (32 kilometers). The Philae Lander is set to land on comet ESA’s Philae lander on descent to comet 67P/Churyumov-Gerasimenko. Image Credit: ESA

From this close-up orbit, the spacecraft will begin the main phase of its data collection, including detailed mapping that will allow mission planners to pinpoint the best location for the attempted landing of the Philae probe.  Already, there is talk of putting Philae down close to the junction between the binary components of 67P/C-G’s nucleus, to try to establish the nature of the two conjoined parts and something of their respective origins.

Rosetta will orbit the comet and Philae will ride on its surface as 67P/C-G draws closer to the Sun. At present it is still in the frozen wastes of the outer asteroid belt, more than four times further from the Sun than is the Earth. But as it moves into the inner solar system, its surface will warm, melting the ices in its surface layers, and releasing gas and dust into space. As the material escapes, forming first a compact coma and later a much larger tail, the orbiter and lander will have the opportunity to learn more about the comet’s emissions and the chemical make-up of the nucleus. A year from now, in August 2015, Rosetta and the comet will be at their closest to the Sun. Who knows by then what secrets the spacecraft will have revealed?