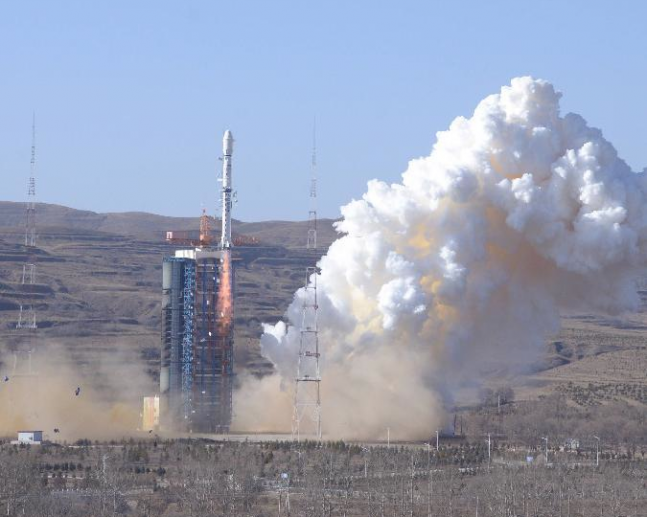 TAIYUAN — China successfully launched an Earth-observing satellite in conjunction with Brazil. The fifth satellite produced from this collaboration, Chinese-Brazillian Earth Resource Satellite-4 (CBERS-4), lifted off from the Taiyuan Satellite Launch Center atop a Long March 4B rocket at 11:26 a.m. local time (0326 UTC on Sunday) Dec. 7th. The mission signaled a major milestone for the Chinese, as it marked the 200th launch of the Long March family of rockets.

This launch is a major milestone for the Chinese, as they are now members of an elite club of three nations to have launched 200 rockets, joined by the United States and Russia.

Lei Fanpei, chairman of the China Aerospace Science and Technology Corporation (CASC), the main contractor for the space program, told Xinhua, “China has become the third country, after the United States and Russia, to complete 200 carrier rocket launches. Long March rockets will make at least another 100 launches in the next seven years.” Between the first launch and the 100th launch on June 1, 2007, there were seven failures; however, between launches 100 and 200, the number of failures reported is two. According to the Chinese, this is a better safety record than the United States or Russia. Long March 4B following launch, as it races towards space. Photo Credit: AEB

The Long March, however, falls short in carrying capacity. It is only able to ferry half of what other foreign launchers can. China currently has two new vehicles in the works, the Long March-5 and the Long march-7. The Long March-5 is expected to debut within the next two years, doubling the amount of cargo space and could be a competitor with the U.S. heavy-lifter, the Delta IV Heavy. Long March-7 is expected to make it’s maiden flight next year, and is expected to handle ferrying cargo up to the space station.

A Long March-4B rocket was responsible for lofting the CBERS-4 satellite into orbit, with orbital insertion occurring approximately 12 minutes after liftoff.

CBERS-4 is the fifth satellite in the program, which started in 1988 to help monitor and plan land management, forestry, water conservation, agriculture, and environmental protection efforts.

The first CBERS satellite launched in Oct. 1999, CBERS-1, with the next two, CBERS-2 and CBERS-2B launching in 2003 and 2007. CBERS-3 followed last Dec., but was destroyed after a rocket malfunction failure. The launch of CBERS-4 was moved up to help compensate for the loss of the previous satellite. In 2017, CBERS-5 is slated to launch.

Investigations following the 2013 failure showed debris blocking the fuel lines in one of the two upper (third) stage engines, resulting in the loss of the satellite. CBERS-4 being loaded into the payload bay of the Long March 4B. Photo Credit: AEB

CBERS-4 is comparable to NASA’s Landsat satellite and is equipped with four cameras, able to take pictures of the Earth in both visible and infrared wavelengths. China and Brazil supervised the development of two cameras each, with China also constructing the spacecraft’s bus.

The satellite is expected to produce approximately 700 images per day and the images will be viewable (for free) on the internet.