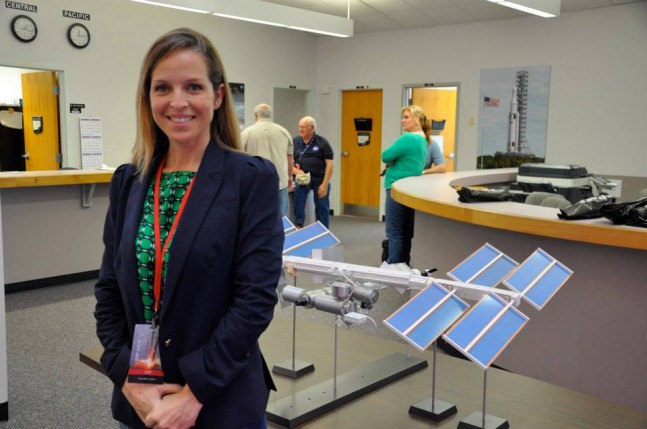 Darlene Cavalier with SciStarter and Science Cheerleader discussed one of the scientific payloads which rode fire to orbit on board SpaceX's Dragon spacecraft which launched on April 18. Photo Credit: Ryan Kobrick / Space Florida

CAPE CANAVERAL, Fla — Project MERCCURI (Microbial Ecology Research Combining Citizen & University Researchers), one of the winners of Space Florida’s  International Space Station (ISS) Research Competition, made its way toward the orbiting laboratory as part of the cargo onboard the Dragon spacecraft which was launched to the station on Friday, April 18.

The project enlisted thousands of laypeople from points across the United States to collect microbes from well-known locations like the Liberty Bell, the Smithsonian Air and Space museum, Sue, the Tyrannosaurus Rex as well as NFL, NBA and MLB stadiums across the U.S. They also swabbed for samples from cell phones, schools, shoes and practice fields. The Science Cheerleaders, a group of current and former pro-sports cheerleaders pursuing careers in science and engineering, led the swabbing teams.

The citizen science aspect of the project was very important to Darlene Cavalier, the founder of SciStarter and Science Cheerleader and a co-principal investigator working on Project MERCCURI.

The microbiology side of MERCURRI, led by Dr. Jonathan Eisen of UC Davis, examined the microbe samples and chose 48 non-pathogenic microbes to ride the SpaceX Falcon 9 to the ISS. The 48 microbes will “compete” in the “Microbial Playoffs” to see which one grows most quickly during the exponential growth phase, which one starts growing fastest from the very beginning, and which grows to the highest density. Besides the public interest aspect, the project will also entail some serious analysis.

“These are everyday microbes, ones which ‘compete’ so-to-speak with high-contact sections of the International Space Station,” Cavalier said during the lead-up to the launch of SpaceX’s Falcon 9.

“Understanding how microbes behave in microgravity is critically important for planning long-term manned spaceflight but also has the possibility of giving us new insight into how these microbes behave in built environments on Earth,” said Dr. David Coil, a microbiologist at UC Davis, in a press release. “We’ve dubbed this the ‘Microbial Superbowl in Space’ – due to the other sports themes of this project.”

The researchers at UC Davis will compare the microbes’ growth and behavior in microgravity with duplicate cultures back on Earth. They’ll also be looking for changes in the RNA and DNA of the microbes. Additionally, crewmembers on the ISS will take swab samples of their own environment, which researchers will analyze in order to understand the station’s microbial presence.