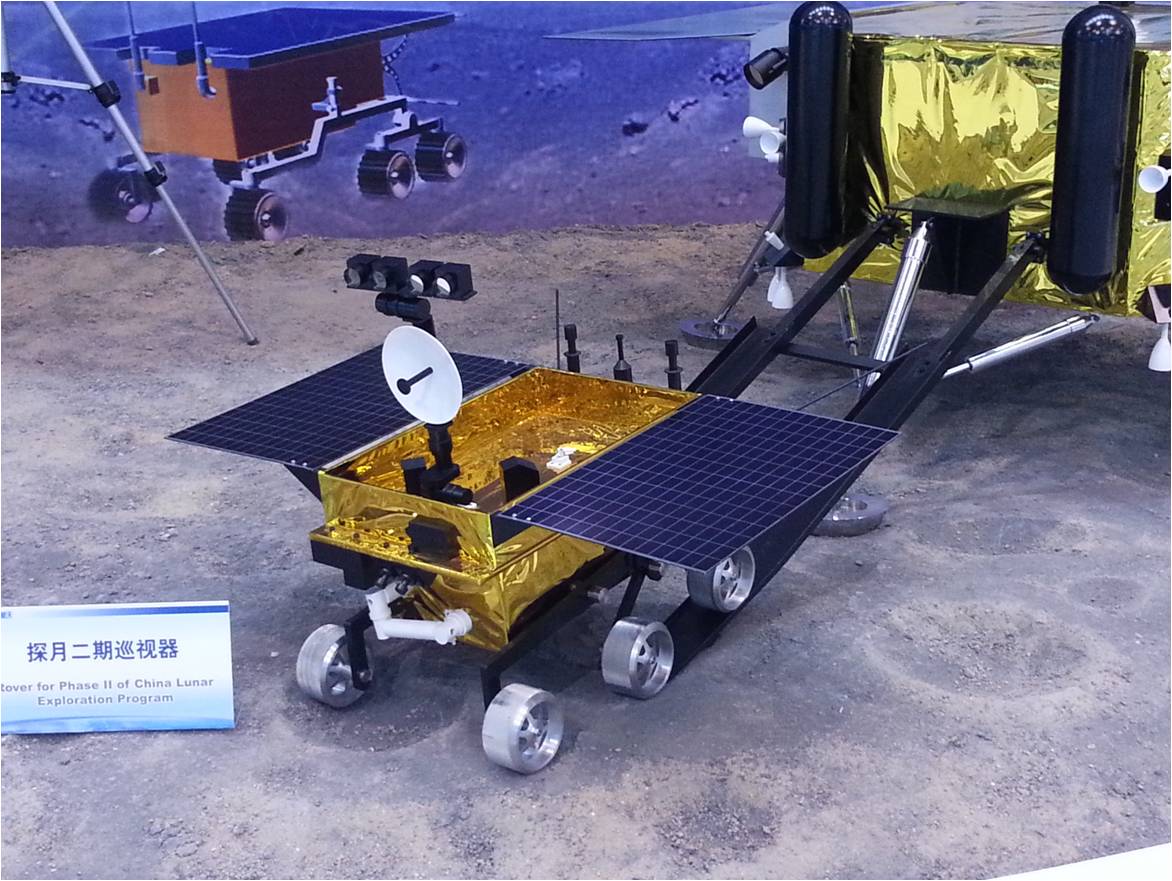 China is poised to launch the Chang'e rover to the Moon. The nuclear-powered robot has a name steeped in Chinese legend. Photo Credit: CDF

Chinese legend has it that once upon a time, a beautiful woman called Chang’e, swallowed the pill of immortality which made her float to the Moon. Once there, the Chinese goddess was accompanied by the Moon rabbit called Yutu, which was tasked with preparing elixirs of immortality so that the goddess could live forever. In our modern-era world, the Chinese National Space Administration (or CNSA) is preparing to give some new life to this age-old myth, albeit figuratively.

Officials with the CNSA held a press conference earlier this week, detailing the upcoming Chang’e 3 lunar landing mission to be launched this December. Chang’e 3 represents the start of the second phase of the overall three-phase Chinese lunar exploration program of orbiting, landing and returning samples from the Moon.

The first phase was completed by the successful Chang’e 1 and 2 orbiters in 2007 and 2010 respectively, which photographed and mapped the Moon in high resolution. The second phase aims to deliver two landers on the Moon, Chang’e 3 and 4, both equipped with autonomous surface exploration rovers for additional studies of the lunar regolith. Chang’e 3 will also mark China’s first attempt at soft-landing a payload on the Moon, something that was last accomplished by the former Soviet Union’s Luna 24 mission, back in 1976. Chinese scientists at the Chang’e 2 orbiter Mission Control, during the orbital mapping of Sinus Iridum, the landing site of the upcoming Chang’e 3. Image Credit: CNTV

As reported by Chinese officials at a recent press briefing, Chang’e 3 aims to touch down at the Moon’s Sinus Iridum (also known as Bay of Rainbows), a basaltic lava-filled plain, located at the northwest quadrant of the Moon’s near side. Once there, the stationary lander will use its solar panels to generate power during the lunar day, and a nuclear Radioisotope Thermoelectric Generator or “RTG”, to help it operate through the lunar night.

Its payload will consist of seven scientific instruments and cameras that will give the lander the capability to capture panoramic photographs and high-definition video of the surrounding landing site. The lander’s Lunar-based Ultraviolet Telescope, or “LUT”. LUT will conduct astronomical observations from the Moon, studying stars and galaxies in the ultraviolet. Another notable instrument on Chang’e 3, is an ultraviolet camera to study the interactions between the Earth’s ionosphere and geomagnetic field.

Since the whole mission has an expected minimum duration of three months, these will represent the first-ever such long-term observations from the Moon, effectively making the Chang’e lander the first astronomical observatory on the lunar surface. If the time-table holds, the Soviet Union will keep the record of the longest-duration lunar mission, gained by the Lunokhod 2 rover, which remained active on the Moon from January 1973 through May 1974. Sinus Iridum as seen through a telescope. This will be the landing site for the upcoming Chang’e 3 mission. Image Credit: Alan Friedman

The six-wheeled rover that will be delivered to the Moon as part of the mission, named Yutu, will host its own set of instruments for conducting independent observations of the lunar surface and environment. These include panoramic stereo cameras for high-definition views of the lunar landscape and navigation and hazard-avoidance cameras, mounted on a mast, not unlike the design that NASA used on its Mars Exploration Rovers Spirit and Opportunity, that landed on the Red Planet in 2004.

The Yutu rover’s mission will be to map the abundance of minerals and other useful resources on the lunar surface which could be used in future crewed missions to the Moon. Artwork depicting the ascent of the mythological Chinese goddess Chang’e to the Moon. Next week, life will imitate art, with the launch of the Chang’e 3 lunar lander mission. Image Credit: Shi Yu

To this end, Yutu has a robotic arm, with its own set of scientific instruments mounted on top. The first of these, is the Visible/Near-Infrared Imaging Spectrometer, for in-situ (on site) measurements of lunar resources and their distribution. The second instrument, called the Alpha Particle X-Ray Spectrometer, will conduct geologic investigations of the lunar regolith and rocks and will help characterise their chemical composition. Yutu will also feature a Ground Penetrating Radar on its underside, which will be able to peer through the lunar crust, down to a depth of 100 meters. This will help Chinese scientists gather valuable data about the geothermal properties of the Moon’s interior, and determine the amount of lunar resources below.

The Yutu rover will not feature an RTG unit like the Chang’e lander, so it will not be able to operate  through the long lunar night. Yet, it is designed to be able to travel distances as far as 10 km from the lander. It will be aided in this with the use of a Navigation and Hazard Avoidance software, which will make the rover capable of autonomously determining its position and path, and avoiding hazardous terrain.

Besides all the scientific bonanza that Chang’e and Yutu will help to deliver to Chinese scientists, the mission will also aid NASA’s Lunar Atmosphere and Dust Environment Explorer or “LADEE” lunar orbiter mission, that has recently begun studying the Moon’s tenuous atmosphere, called the exosphere. This exosphere, is a near-vacuum layer of free-floating chemical elements that come from the lunar surface, slowly drifting away, escaping the Moon’s weak gravity. LADEE’s mission is to measure and characterise these elements and their escape rate. Since soft-landing a spacecraft on the Moon using chemical rockets disturbs the natural state of the lunar exosphere, mixing it with chemical propulsion gases, LADEE will have the unique opportunity to observe the exosphere before, and after the arrival of Chang’e 3 on the lunar surface. This will provide  insights into how the lunar environment is affected by human activity.

Chang’e 3 will launch atop a Chinese Long March 3B rocket, from the Xichang Satellite Launch Center at 18:00 GMT on 1 Dec. Following launch, the spacecraft will be inserted into a direct Trans-Lunar Injection orbit, reaching the Moon approximately 5 days later. Having achieved lunar orbit, Chang’e will commence a 10-day circumlunar phase of orbital adjustments prior to its final descent and soft-landing on the Moon, where its 90-day primary science mission will begin. With luck, perhaps the mission will even catch a glimpse of a young lady – and her pet rabbit.