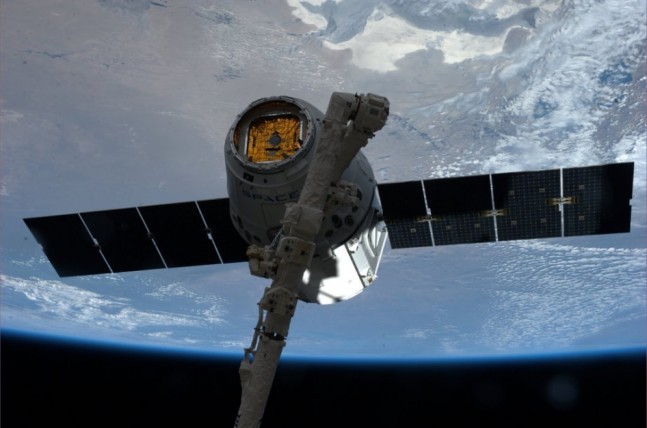 Most of us here on Earth dream of chocolate bunnies and candy eggs as Easter treats, but the astronauts aboard the International Space Station (ISS) were awaiting the arrival of much-needed supplies on Easter Sunday. Japanese astronaut Koichi Wakata successfully captured the cargo vehicle using the station’s Canadarm2 at 7:14 a.m. EDT (1114 GMT). The spacecraft was then berthed to the Earth-facing side of the station’s Harmony module. “Gentlemen, the Easter Dragon is knocking at the door,” NASA’s Mission Control said as the capsule was bolted into place.

Traveling approximately 260 miles above Egypt’s Nile River, the Dragon capsule was roughly 30 feet (10 meters) from the space station when the grapple took place. American Astronauts Rick Mastracchio and Steve Swanson assisted Wakata from the Cupola robotics work station. Providing him with estimates and guidance to safely capture the capsule after its two-day journey to the orbiting laboratory.

“Congratulations to the entire ops team for the successful launch, rendezvous and capture of Dragon,” Wakata radioed down to mission control, located in Houston, Texas. Other than splashing a bit of mud on itself, the Falcon 9 v1.1 rocket lifted off with few issues, sending some 4,600 lbs of supplies to the ISS. Photo Credit: John Studwell / SpaceFlight Insider

Mission Control radioed back: “Great work catching the Dragon, thanks for getting her on board.” Over in California at SpaceX’s Hawthorne headquarters, flight controllers were applauding, high-fiving and shaking each other’s hands as Dragon was firmly in the space station’s grasp.

After waiting more than a month for the resupply shipment of approximately 4,600 pounds of supplies including over 150 science experiments, the crew completed berthing the capsule at the Harmony module around 10:06 a.m. EDT yesterday and will be opening the hatch today, Monday, April 21.

Included in the cargo will be a pair of legs for the robotic astronaut, Robonaut 2. Currently Robonaut 2 is only an upper body (torso, arms and a head) and the legs will allow the robot to move about the ISS and eventually assist the astronauts with dangerous or monotonous tasks outside the station.

OPALS or Optical Payload for Lasercomm Science is one of the science experiments contained in the Dragon cargo. OPALS is NASA’s Jet Propulsion Laboratory’s first external payload (which traveled in the unpressurized section of Dragon’s trunk) to the ISS and will be testing the use of laser optics to transmit data back to Earth. Laser beams are more narrow than radio waves and therefore can provide more efficient transmissions. Transmission rates have the potential to be increased by anywhere from a factor of 10 to 100 – without using excess power.

Another experiment aboard Dragon is the T-Cell Activation in Aging study. Scientists are hoping to discover a defect in T-Cell activation when exposed to microgravity. T-Cells are a special variety of white blood cells, covered in chemical receptors and are part of the body’s immune system response to fight off illness. As we get older, our immune system deteriorates, making our bodies more susceptible to illness. Right now the cause of this deterioration is not fully understood, but the same type of immune system changes seen in aging also occurs during spaceflight. NASA’s Vegetable Production System (VEG01) is another new experiment that has now arrived at the space station. This portable plant growth chamber runs on less power than an average home computer and will provide psychological benefits to the crew as well as scientific data on how plants grow in microgravity.

“Based upon anecdotal evidence, crews report that having plants around (from previous space studies) was very comforting and helped them feel less out of touch with Earth,” said Gioia Massa, a project scientist at NASA’s Kennedy Space Center in Florida. “You could also think of plants as pets. The crew just likes to nurture them.”

As mentioned, Dragon ferried some 4,600 lbs worth of cargo and supplies to the ISS. CASIS, the Center for the Advancement of Science in Space provided the following list of experiments now on orbit:

Crystalline Monoclonal Antibody
Paul Reichert, Merck Research Laboratories
Commercial investigator Merck will focus on the protein crystal growth of a human monoclonal antibody developed by its research labs that is currently undergoing clinical trials for treatment of multiple diseases to improve human health. High quality crystalline suspensions of the antibodies in microgravity will aid in not only structure determination but also pharmaceutical applications, such as drug delivery and purification/storage of the therapeutic substance.

IPPase Crystal Growth in Microgravity
Dr. Joseph Ng, iXpressGenes, Inc.
This investigation will produce protein crystals large enough for a specific type of crystallography that can show very intricate details of protein structure. The specific enzyme being studied is involved in a variety of cell functions, including protein production – but a very detailed part of how this enzyme works is unknown. Producing crystals that allow analysis of very small and detailed structural features will not only help researchers understand this protein’s function but also determine best practices for studies of other proteins at this level of detail. One of the more interesting items on Dragon’s cargo manifest is the robotic “legs” for Robonaut 2. Photo Credit: Jason Rhian / SpaceFlight Insider

Exploiting On-Orbit Crystal Properties for Structural Studies of Medically and Economically Important Targets
Dr. Edward Snell, SUNY Buffalo
This research focuses on growing crystals of four proteins associated with human disease. These proteins crystallize on Earth but not with sufficient quality and uniformity to determine their structures. Larger, better-organized crystals of these specific proteins could have a significant impact on drug development for Parkinson’s disease, bovine spongiform encephalopathy, ethylmalonic aciduri and cutaneous squamous cell carcinoma.

Crystallization of Huntingtin Exon 1 Using Microgravity
Dr. Pamela Bjorkman, California Institute of Technology
This research focuses on huntingtin, the protein responsible for Huntington’s disease. The structure of this protein remains unknown. Procuring a high-resolution structure would have significant scientific and medical impact in understanding the structural basis for neural toxicity and developing treatments for Huntington’s disease and other related disorders, such as spinocerebellar ataxia.

Crystallization of Human Membrane ABC Proteins in Microgravity
Dr. Stephen Aller, University of Alabama-Birmingham
This investigation focuses on determining the structure of human membrane proteins, which could accelerate the commercialization of next-generation drugs to treat AIDS-related dementia, high cholesterol, atherosclerosis, cystic fibrosis and multi-drug resistance as it relates to cancer. Molecular Biology of Plant Development in the Spaceflight Environment
Dr. Anna-Lisa Paul, University of Florida
This research focuses on the growth and development of Arabidopsis thaliana seedlings in the spaceflight environment. Researchers seek to identify the genes involved in plant root morphology and adaptive physiology; specifically, how a root knows in which direction to grow when gravity is absent. Results will expand on previous ISS research in this area and inform the study of specific molecular pathways involved in plant adaptive physiology on Earth.

The ISS crew had to wait patiently for their resupply cargo to arrive, as the launch was delayed multiple times. One potential delay was due to a failure of the ISS external computer known as a Multiplexer/Demultiplexer (MDM). Repair of this vital computer is necessary and will be the subject of a spacewalk on April 23, 2014. EVA 26 will take approximately two and a half hours and American astronauts Rick Mastracchio will have the title of EV 1 and Steve Swanson will be EVA 2 on this task.

An MDM is an electronic unit responsible for sending and receiving multiple streams of data, so essentially all incoming/outgoing data both to and from the ISS is routed through one of the stations multiple MDMs. Wednesday’s scheduled EVA is Mastracchio’s ninth and Swanson’s fifth career spacewalk and will begin at 9:20 a.m. EDT.

Dragon should remained berthed to the ISS for around 20-30 days. The mission was originally supposed to launch in April of last year but saw its start repeatedly delayed. Just last month, SpaceX was ready to unleash the Dragon on its third resupply run to the ISS after a planned March 12 launch date – when contamination was noted on Dragon’s impact shielding blanket. SpaceX requested that the launch be pushed back to no-earlier-than March 30. An issue with a radar system on the Eastern Range, initially stated as a fire – but then described as a short circuit saw the launch pushed back by an additional three weeks. On April 14, SpaceX appeared to have cleared the technical issues and was preparing to launch when a helium leak in the Falcon 9 v1.1’s upper stage marked another delay for the flight. With a new launch attempt set for March 18 – it appeared that weather would cause a further delay for the mission – but atmospheric conditions improved enough for the Falcon to ascend through the clouds and on its way to orbit. Howdy just wanted to give you a quick heads up. The words in your content seem to be running off the screen in Chrome.
I’m not sure if this is a format issue or something
to do with browser compatibility but I figured I’d post to let you know.
The style and design look great though! Hope you get the issue fixed soon.
Cheers