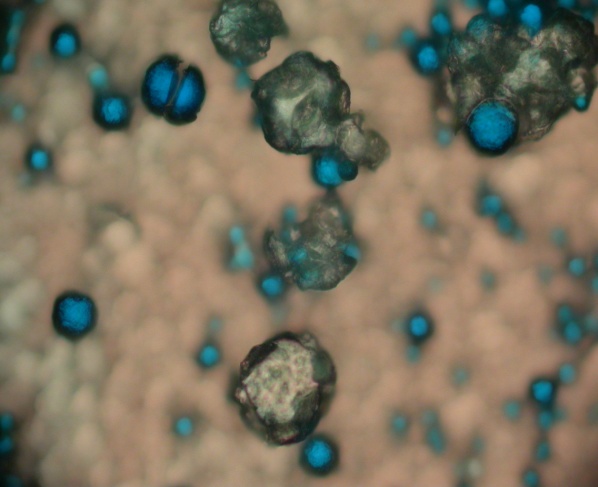 The oil (blue) contains a visualization marker that is traceable by ultrasound and C-T scans to allow doctors to follow the microcapsules (brown) during site-specific delivery to the tumor. The semipermeable outer skin has the physical ability to time-release the drug slowly. Image Credit: NuVue Therapeutics, Inc.

Invasive and systemic cancer treatment is a necessary evil for many people with the devastating diagnosis. These patients endure therapies with ravaging side effects, including nausea, immune suppression, hair loss and even organ failure, in hopes of eradicating cancerous tissues in the body. If treatments targeted a patient’s cancerous tissues, it could provide clinicians with an alternative to lessen the delivery of toxic levels of chemotherapy or radiation. Imagine the quality of life from such therapies for patients. Remarkably, research that began in space may soon result in such options here on Earth.

As we recognize February as National Cancer Prevention Month, it is useful to also point out the continuous improvements to cancer treatment through research and discovery. Using the distinctive microgravity environment aboard the International Space Station, a particular series of research investigations is making further advancements in cancer therapy. A process investigated aboard the space station known as microencapsulation is able to more effectively produce tiny, liquid-filled, biodegradable micro-balloons containing specific combinations of concentrated anti-tumor drugs. Using specialized needles, doctors can deliver these micro-balloons, or microcapsules, to specific treatment sites within a cancer patient. This kind of targeted therapy may soon revolutionize cancer treatment delivery.

Use of the microgravity environment aboard the space station for microencapsulation experiments was a necessity before the ability to develop an Earth-based technology for making these microcapsules. “The technique that we have for making these microcapsules could not be done on the ground, because the different densities of the liquids would layer,” explained Dennis Morrison, Ph.D., retired NASA principal investigator of the Microencapsulation Electrostatic Processing System-II (MEPS-II) study and current vice president and director for microencapsulation research and development at NuVue Therapeutics, Inc. “But in space, since there is not sedimentation due to gravity, everything goes spherical.” The MEPS operations in microgravity brought together two liquids incapable of mixing on Earth (80 percent water and 20 percent oil) in such a way that spontaneously caused liquid-filled microcapsules to form as spherical, tiny, liquid-filled bubbles surrounded by a thin, semipermeable outer membrane.

In space, surface tension shapes liquids into spheres. Each molecule on a liquid’s surface is pulled with equal tension by its neighbors. The closely integrated molecules form into the smallest possible area, which is a sphere. In effect, the MEPS-II system allowed a combination of liquids in a bubble shape because surface tension forces took over and allowed the fluids to interface rather than sit atop one another.

Though the MEPS-II technology was produced on the space station in 2002, the ensuing global economic struggles and funding hurdles made it difficult to raise investor capital for new clinical trials of the microcapsules in humans. This gap in the research slowed movement from discovery to an actual product that improves human health.

The MEPS-II system is now being brought to commercial scale under U.S. Food and Drug Administration (FDA) Good Manufacturing Practice requirements by NuVue. NuVue exclusively licensed the MEPS technology for medical uses, including the treatment of cancer. These cancer therapies are now the subject of several patents and patent pending applications.

Commercialization of the MEPS technology and methods to develop new applications for these unique microcapsules has already begun. The space station research led to 13 licensed microcapsule-related patents and two that are pending. In addition, NuVue has designed devices integrating the delivery of the MEPS-II microcapsules with enhanced ultrasound visualization and cryotherapeutic effects, which are the subject of four additional issued and three pending patents. Through the use of NuVue’s specialized biopsy needles working in concert with their enhanced ultrasound guided visualization technology, the needles are visible by an ultrasound imaging system. This allows for a targeted and site-specific approach of the MEPS microencapsulated drug delivery to the tumor. With this targeted approach, the MEPS microcapsules reduce the amount of unpleasant side effects of chemotherapy, whereas normal chemotherapy involves pharmaceutical injection into the entire body to treat cancer cells present in a patient. The microcapsules can also include a combination of drugs tailored to a specific patient, and they can be engineered for time release, providing longer-lasting therapeutic effects within the patient’s cancerous tissues.

“Overall, this amounts to a combination of unique things that individually work, but put together work much better,” said Morrison. “Microcapsules are a device that can be used together with ultrasound needles to mark the biopsy site for diagnosis. They can also mark the perimeter and margin of the tumor. When properly implemented, ultrasound can monitor the progress of any tumor therapy with the new MEPS marker imaging microcapsules being positioned within the tumor tissues, even if the therapeutic delivered was not through the use of the MEPS microencapsulation process.”

In laboratory testing, MEPS-II microcapsules containing anticancer drugs were injected directly into a human prostate and lung tumors in animal models. These models were then, in follow on tests, also injected following the delivery of specific cryo-surgical effects, similar to a freeze and thaw effect on the tumorous tissues. Injecting the microcapsules directly into the tumor demonstrated improved site-specific therapeutic results and the inhibition of tumor growth. Following cryo-surgery, the microcapsules demonstrated improved destruction of the tumor better than freezing or local chemotherapy alone.

Though Morrison’s previous laboratory studies of microcapsules were primarily focused on prostate and lung cancer, his studies now target breast cancer for the FDA approval process. Though it will take a few years to get approval to use the microcapsules as a treatment option filled with anti-tumor drug therapies, several devices that will aid in drug delivery are planned for pre-clinical study as early as next year. NuVue’s ultrasound-enhanced needles and the imaging marker microcapsules, which do not contain drugs, can be combined for use within the cancer patient.

After achieving full FDA approval, planned clinical trials will involve injecting the microcapsules with the anti-tumor drugs directly into tumor sites in humans at both MD Anderson Cancer Center in Houston and the Mayo Cancer Center in Scottsdale, Ariz. Given the success in animal models in laboratory studies with human prostate and lung tumor treatment, Morrison has high hopes in the near future, of being able to begin use of the microcapsule treatment in breast cancer.

As stipulated by Morrison and the NuVue research team, “these technologies were only able to come to fruition because of the availability of the microgravity environment aboard the space station. Without it, this innovative breakthrough involving the microencapsulation technology process would have never been created.”

Just as microgravity can aid in the discovery of new technologies for cancer treatment, these microcapsules may one day aid in the recovery of breast and other specific deep tissue cancers.

This article was written by Laura Niles for NASA and can be viewed here: Cancer