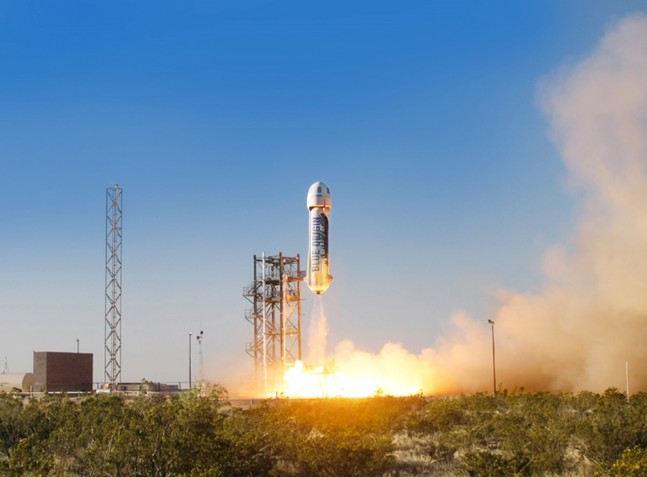 The incredibly-secretive rocket company Blue Origin released video on Wednesday, detailing a test flight of their “New Shepard” spacecraft. The test flight occurred on April 29, 2015. Details about the flight are extremely limited, but Blue Origin did release a video and several photographs of the flight. This most recent flight highlights a company that is rapidly coming to the fore.

This “First Flight”, as Blue Origin is calling it, took the craft to an altitude of 307,000 feet (93,574 meters). The launch was designed as a full up test of all of the capabilities of the New Shepard spacecraft. According to Bezos, “… if New Shepard had been a traditional expendable vehicle, this would have been a flawless first test flight.” As is the case with most testing programs, something did go wrong.

“Of course, one of our goals is reusability, and, unfortunately, we didn’t get to recover the propulsion module because we lost pressure in our hydraulic system on descent.” Blue Origin is already working in two more booster modules and they expect to be flying again soon,” Bezos noted.

The New Shepard spacecraft and its booster use a vertical take-off, vertical landing (VTVL) flight profile.

The spacecraft uses a single 110,000 lb (50,000 kg) liquid oxygen (LOX) and liquid hydrogen engine. This BE-3 engine provides enough power to lift the New Shepard to altitudes of more than 62 miles (100 km). After liftoff, the vehicle passes through Mach 3 before separating the capsule from the booster. The booster is designed to return to the launch pad autonomously, using its main engine for flight control. The craft automatically deploys a set of landing legs before settling onto the Texas soil. The capsule continues to coast through a parabolic flight to apogee. Recovery is through a drogue to main parachute system.

The New Shepard capsule is fully pressurized, allowing for up to six spaceflight participants. The 530 ft3 (15 m3) area can also be used for experimental payloads. The company’s website touts the amount of space as being 10 times that of NASA’s Mercury capsules.

The New Shepard Booster uses the BE-3 engine for ascent before separating from the capsule. It then uses a set of drag brakes to slow its descent while a set of steerable fins help to guide it back to the pad. The main engine fires a braking maneuver just before landing back at the Blue Origin facilities.

Blue Origin conducts all of its flights from the Corn Ranch – its private spaceport near Van Horn, Texas. Unlike other space companies, this greatly simplifies the launch process as coordination with a myriad of entities such as the Air Force and NASA. The sprawling 290,000 acre complex allows Blue Origin to conduct its tests in safety and away from the public.

In addition to the New Shepard space vehicle, Blue Origin is working on a craft Bezos referred to as Very Big Brother. This is an orbital spacecraft which will use the BE-4 – a 550,000 lbf (2.45 MN) thrust engine running on LOX and liquified natural gas. That engine is a joint development with United Launch Alliance.

“The launch, altitude achieved, capsule separation and landing is a huge accomplishment, and we at Space Florida extend our congratulations to the whole team at Blue Origin. Well done,” said Space Florida’s CEO and President Frank DiBello in a statement issued by the organization.

FANTASTIC!!
I hope they work out their issue with 1st stage recovery.
Is there any more info/video on that part?

Hopefully they’ll set up shop at Kennedy soon. They tried once and Elon convinced NASA not to let them have shared use of the pad.
Blue is the ideal company to work for, they treat their employees very well.

Elon doesn’t want Blue to set up shop at Kennedy because his employees would be leaving to work for Blue.