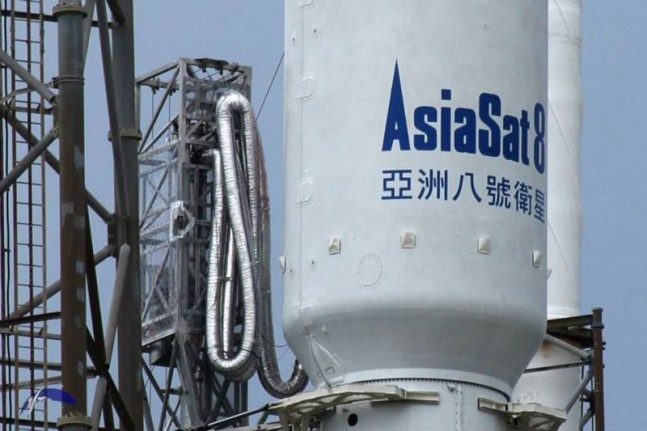 CAPE CANAVERAL, Fla — Asia Satellite Communications (AsiaSat ), a Hong Kong-based company, is getting ready to see the launch of its AsiaSat 8 communications satellite aboard a SpaceX Falcon 9 v1.1 rocket. The two-hour launch window begins at 1:25 a.m. EDT (525 GMT) on August 5. There is a backup launch window on August 6 around the same time. AsiaSat will liftoff from Cape Canaveral Air Force Station’s Space Launch Complex 40 (SLC-40). This will mark the third launch in just over a week to take place from the Cape in a little over a week.

According to the company’s own website, AsiaSat launched Asia’s first privately owned satellite in April 1990 (AsiaSat 1). As of 2013, AsiaSat owned four operational satellites (AsiaSat 3S, 4, 5, and 7), with AsiaSat 6 and 8 both launching this year (2014). According to NASASpaceflight, AsiaSat 6 has already arrived at Cape Canaveral, flown in on an Antonov An-124 transport aircraft. All AsiaSat satellites provide telecommunications services to the Asia-Pacific region. A map of the band coverage AsiaSat 8 is expected to deliver. Photo Credit: AsiaSat

The AsiaSat 8 spacecraft is designed to trace the same orbital slot (105.5 degrees East) as its predecessor AsiaSat 7. This orbital orientation gives the satellite preferred “look angles” to help deliver better services across the Middle East, Asia, and the Pacific.. The company’s website describes AsiaSat 8 as “a Space Systems/Loral 1300 series satellite, to be equipped with 24 Ku-band transponders and a Ka-band payload. Co-locating with AsiaSat 7, Asia’s most established satellite platform for Middle Eastern, European, Asian and international programming, AsiaSat 8 will provide exceptional power and additional Ku beam coverage with inter-beam switching capability for services including DTH [direct to home] television, private networks and broadband services.” AsiaSat 8, with a power payload of 8,500 watts (unsurpassed in the AsiaSat family), will service China, India, the Middle East, and Southeast Asia.

To allow the spacecraft to accomplish this, the Falcon 9 will push AsiaSat 8 into a high Geostationary Transfer Orbit (GTO), where it will be placed in position above its target region. The additional fuel required to take AsiaSat 8 into GTO. During the next CRS mission there might attempt be another propulsive landing of the booster’s core stage. This effort is in pursuit of making the F9 a reusable and recoverable rocket. This is just one of many developments that have taken place with the Hawthorne, California-based company’s offerings recently.

In July of this year, the United States Air Force announced that the F9 rocket was progressing towards an Evolved Expendable Launch Vehicle (EELV) classification. Such a status would allow SpaceX to include the Department of Defense among its growing list of clients.

At present, there are no technical concerns that have arisen which might cause a delay. NASASpaceflight reports that SpaceX performed a static fire test on Thursday July 31 in order to to confirm the status of the launch vehicle. This static test is conducted so as to verify that the nine Merlin 1D engines powering the F9 booster are ready to carry out the flight. It also checks the engine ignition and engine shutdown procedures with the rocket body on the pad. An artist’s impression of the AsiaSat 8 Satellite. Image Credit: AsiaSat

With everything looking good, and assuming no last minute problems, the real launch will take place very much like the static test.

In the case of the test, NASASpaceflight recounts that fuel was loaded into the rocket about two-and-a-half hours before launch. Next, an hour before launch, fuel and Thrust Vector Control were bled from stage two. At 13 minutes to launch, one last flight readiness survey assessed the status of Falcon 9. About five minutes to static test, the Falcon 9 was transferred to internal power. Two minutes later, the Flight Termination System was armed, the self-destruct mechanism that allows flight control to terminate the rocket if the launch goes wrong. With the propellant tanks pressurized, Falcon 9’s engines were then briefly initiated.

During the actual launch, the first stage’s Merlin 1D engines, with a combined sea-level thrust of over 1.3 million pounds, will burn for close to three minutes to send the rocket into the atmosphere. Whereas nine Merlin engines are used in the first stage, only one will burn in the second stage. Connecting the two stages is a carbon fiber and aluminum composite ring. The most recent flight of a Falcon 9 saw the six Orbcomm OG2 satellites sent into orbit. The launch took place on July 14 after several weeks of delays, some caused by the Falcon 9 rocket, others by unavoidable maintenance at the spaceport. SpaceX will follow the AsiaSat 8 launch with another (AsiaSat 6); the launch date is still to be determined. However, steps to carry out the AsiaSat 6 launch are already in motion. The payload is currently in storage at SLC-40, and another Falcon 9 v1.1 rocket is being prepped for shipment to the Cape as well.

On July 28 and Aug. 1, United Launch Alliance carried out the flights of AFSPC-4 and the GPS IIF-7 satellite on Delta IV Medium+ 4,2 and Atlas V (respectively) rockets. With tomorrow’s launch, three separate missions will have taken off into the black – in just over a week, marking a period of increased activity at Cape Canaveral. As both launch service providers work to carry out an array of missions on behalf of the DoD, NASA and commercial customers, Florida’s Space Coast region can expect to see launches taking place with increased frequency.

For the time being, SpaceX reports no concerns after the static test or subsequent data analysis. Weather on the space coast will be closely watched as always. Stay tuned to Spaceflight Insider’s launch calendar and mission monitor for updates.