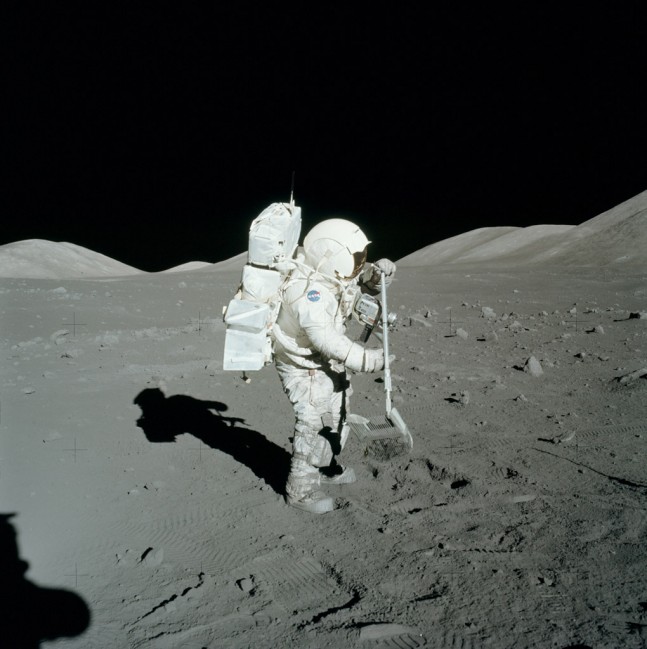 Forty-five years after the historic Apollo 11 landing of Neil Armstrong and Buzz Aldrin on the surface of the Moon, the priceless Moon rocks brought back by that legendary expedition are back in the news, revealing new evidence confirming the theory that the Moon was formed by a Mars-sized planetesimal slamming into the young molten Earth.

In the four decades since the Apollo Moon landings, scientists have studied only about ten percent of the lunar rocks and dust collected by astronauts from 1969 to 1972. In 1972 the breccias brought back by John Young and Charlie Duke from their Apollo 16 mission revealed that the lunar surface features were formed primarily by meteoric impacts, not volcanism as originally thought.

In 2008, study of the Apollo 15 Moon rocks confirmed for the first time the existence of water on the Moon. Now samples from the Apollo 11, Apollo 12, and Apollo 16 missions reveal the chemical signature of the planetesimal, known as Thea, which is believed to have struck the Earth about 4.5 billion years ago, blasting a blob of molten slag into space which solidified and formed the Moon. The lunar module Eagle landed on the Moon’s Sea of Tranquillity on July 20, 1969, where Neil Armstrong and Buzz Aldrin collected the first uncontaminated material from another world. Photo Credit: NASA

All bodies in the Solar System have a slightly different chemical makeup. The ratios between isotopes of oxygen, titanium, silicon, and tungsten act as a reliable signature of which planet or moon they come from. But up to now, scientists have been perplexed by the similarity in the ratios between Earth rocks and Moon rocks.

This has led to a number of alternative theories for the Moon’s genesis, including the hypothesis that particles of the Earth and Moon mixed liberally in the debris field caused by the impact, or that the proto-Earth was spinning so rapidly that the impact of a much smaller object could have thrown off the material that formed the Moon. But now a new technique in Germany to study of samples of the Apollo Moon rocks reveals that these rocks have a slightly different chemical makeup than those with a terrestrial origin.

Daniel Herwartz of the University of Cologne, lead author of a paper published this week in the journal Science, described his team’s method of separating oxygen isotopes from other trace gases.

“We have developed a technique that guarantees perfect separation,” Herwartz wrote. “The differences are small and difficult to detect, but they are there.” Buzz Aldrin sets up the passive seismograph, one of several experiments on the first lunar landing mission. Photo Credit: NASA

Originally the team studied fragments of Moon rock that had come to Earth as meteorites, but there was too much contamination and weathering to gather meaningful data. So the team obtained samples from the Apollo 11, Apollo 12, and Apollo 16 missions, extracted oxygen from those samples, and passed it through a spectrometer in order to find the differences in the ratios. What they found was an O-17:O-16 ratio that was 12 parts per million higher than rocks from Earth’s mantle.

David Stevenson of the California Institute of Technology in Pasadena, California, wrote in an e-mail: “It is a relief that a disparity has been found, since the total absence of difference between Earth and Moon would be hard to explain.”

Planetary scientist Robin Canup of the Southwest Research Institute in Boulder, Colorado is skeptical of the findings however.

“This work is the first to claim to see such a difference in the isotopes of oxygen…The reported difference between the Earth and moon is extremely small, small enough that I think there will be debate as to whether the difference is real or an artifact of how one interprets the data.” Stevenson said, “Now that a difference has been found, many will work to confirm or deny it and do battle over what it means.”

These findings suggest that the Moon is composed of approximately 50 percent Earth material and 50 percent Thea. The Apollo Moon landings heralded a revolution in how scientists viewed the formation and understanding of the dynamics relating to our closest celestial neighbor.