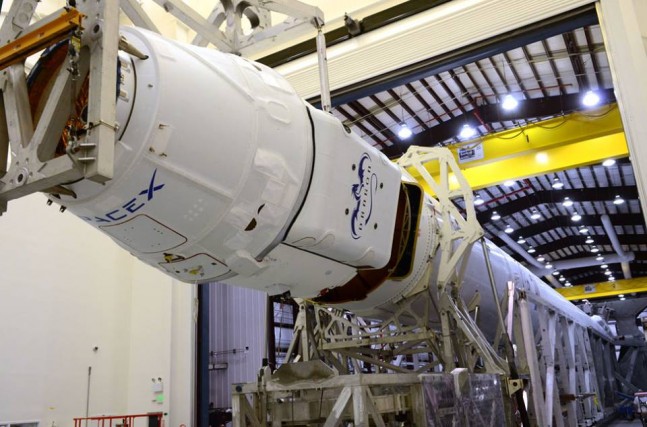 CAPE CANAVERAL, Fla – The rescheduled launch of a Space Exploration Technologies (SpaceX) Falcon 9 v1.1 rocket has been pushed back yet again – this time with no new launch date provided. Liftoff had been slated to occur in the late evening hours of Sunday, March 30. The cause for the delay was the same as the one which forced United Launch Alliance (ULA) to postpone their launch of an Atlas V 541 rocket from nearby Space Launch Complex 41 – a fire. The blaze damaged the ground tracking station which supports launch vehicles as they head to orbit.

SpaceX has confirmed that the launch has been postponed due to the fire at the ground tracking station which caused the delay in the Atlas V launch as well. Little more information is presently available. It has been noted by some news outlets that ULA will try to launch again on April 10. In actuality this is not a new launch time – it is just when the range should be ready to once again support launch operations. “Nothing will be launching before April 10,” said Chris Calkins with the 45th Space Wing. “The range currently cannot support any launches until at least that time.”

Not wanting to leave the Atlas V or its precious cargo out in the temperamental Florida weather, ULA rolled the rocket back into the Vertical Integration Facility (VIF) today, March 27. The VIF resides just adjacent to SLC-41.

A report appearing on SpaceFlight Now has stated that the exact nature of the damage has not been released by the U.S. Air Force. However, given the critical nature of what the equipment is supposed to do, it is likely it will need to be repaired, possibly replaced and then tested to see if it is performing as required.

The radar system which caused the two launches to be postponed is part of a network which tracks and monitors the progress and health of rockets as they journey out of Earth’s gravity well. The system extends out into the Atlantic from Florida’s Space Coast.

According to the SpaceFlight Now report, engineers looked into the differences between the Atlas V and Falcon 9 to see if the range could support the launch using the damaged equipment.

The Falcon 9 v1.1 with its cargo for the International Space Station, was originally slated to launch last year, but has been repeatedly delayed. Then SpaceX announced a launch date of March 16, 2014 – only to find that their Dragon spacecraft had an undisclosed contaminant on its thermal blankets – forcing a further delay to March 30. Now, this latest setback has pushed the launch back even further.

The issue comes shortly after SpaceX CEO and Founder Elon Musk told a Senate Hearing on the future of the Evolved Expendable Launch Vehicle (EELV) Program that SpaceX could handle all of the U.S. Air Force’s payloads and more. Some of the more interesting aspects of this flight include legs for NASA’s Robonaut 2, landing gear on the Falcon 9 and phone sats. Photo Credit: SpaceX

Historically, SpaceX has proven unable to launch the company’s Falcon 9 rocket and variants at the rate of more than twice a year. The company launched twice in 2010, was unable to launch in 2011, twice in 2012, three times in 2013 and once so far this year. It is unclear when SpaceX might be able to push beyond this rate of launch. It should be noted that the rate of launch required to handle all of the Department of Defense’s (which are currently managed by ULA) as well as the company’s NASA’s payloads – exceeds SpaceX’s demonstrated capabilities by approximately five times.

Through the Commercial Resupply Services contract that SpaceX has with NASA, the Hawthorne, California-based company is required to launch 12 resupply lights to the ISS through 2016. That means SpaceX must carry out 10 flights in less than two years.

When Dragon does launch, it will carry almost two and a half tons of cargo and crew supplies to the International Space Station. Most of which will ride inside the pressurized portion (Dragon has pressurized and unpressurized cargo sections). This consists of more than 1,500 lbs of science equipment, over 1,000 lbs of crew supplies and approximately 800 lbs of parts and other equipment. The flight of CRS-3 will see a marked increase in the amount of payload that Dragon will ferry to the space station. Previous missions have delivered about 2,000 lbs of cargo and supplies to the outpost during each flight.

The station has become a highly-active hub in terms of space flight with no fewer than five distinct cargo vessels visiting the orbiting laboratory. For SpaceX, this is a mixed bag as it means that Dragon’s mission will need to be scheduled so as to avoid a orbital traffic jam. A Russian Progress spacecraft is slated to travel to the ISS on April 9. At best, this means that Dragon might launch in the middle of next month.