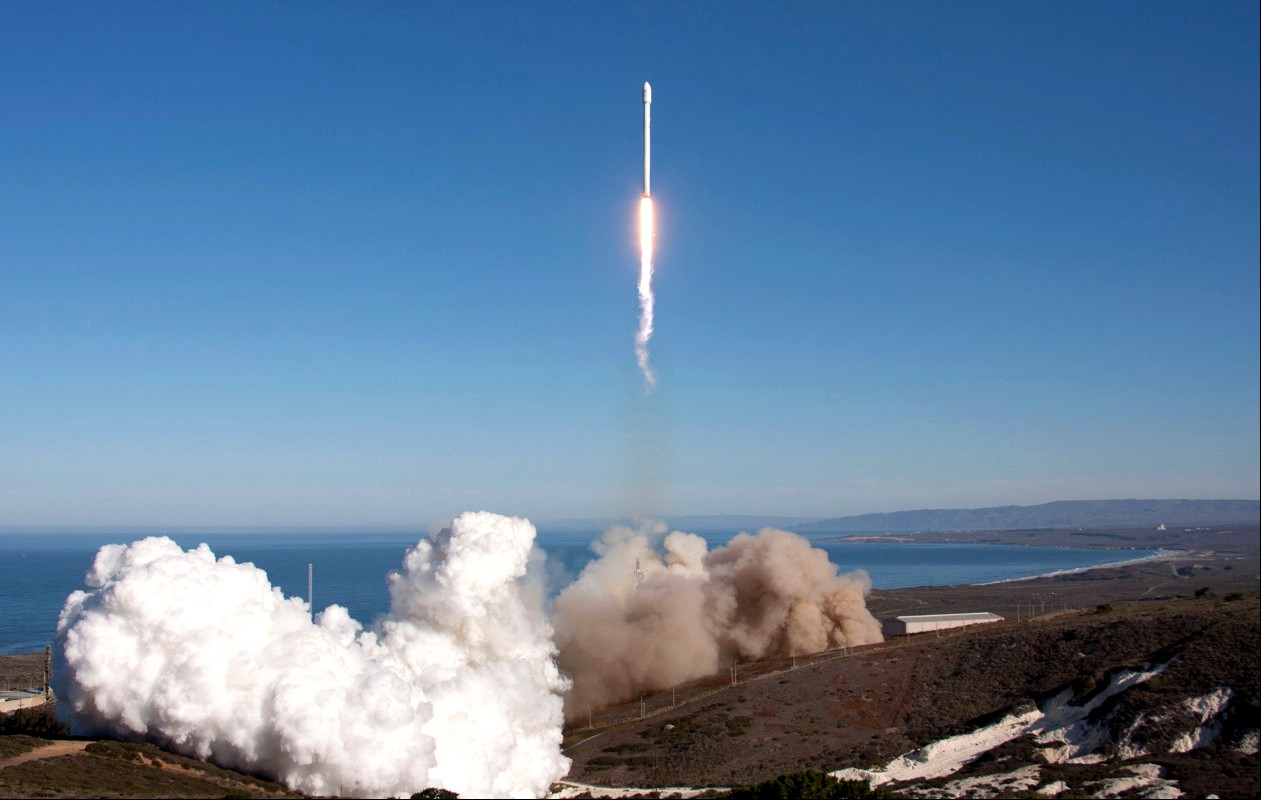 On September 29, SpaceX successfully lofted its next generation Falcon 9 v1.1 from Vandenberg Air Force Base in California, carrying the Canadian Cassiope satellite and three secondary payloads. All satellites were correctly placed into low Earth orbit, but subsequent testing designed to prepare for future geostationary orbital insertions was not completed as planned.

The new Falcon 9 has a sea level thrust capacity of 5,885 kN using nine upgraded Merlin 1D engines instead of Merlin 1C. Falcon 9 v1.1 has a slightly longer profile to accommodate increased propellant capacity and a new fairing design. The engines are positioned in an “Octaweb” – eight engines encircling the ninth instead of Falcon 9v1′s 3×3 grid.

The launch went off without a hitch, although it took watching media by surprise when the rocket blasted off a couple minutes early without the expected local broadcast countdown – a loose audio connection was later discovered at the site. The launch had already been delayed a couple weeks to allow time to address anomalies in an earlier hot fire test. There was no evidence of anomalies this time around – the first two stages fired perfectly. However, SpaceX had intended to reignite the second stage after releasing its payload, which is where a slight hiccough occurred. The launch of CASSIOPE was the first from Vandenberg Air Force Base in California. All other Falcon 9 launches have taken place at Cape Canaveral Air Force Station in Florida (seen here). Photo Credit: Mike Howard / SpaceX

In a turn of events that is no doubt being troubleshot as we write, SpaceX was unable to reignite the second stage. The booster was relit twice but the stage got spun up in the process, sloshing its fuel in a centrifuge effect that extinguished the rocket. This reignition will be necessary for SpaceX’s geostationary satellite customers, the first of which has a launch scheduled this very month. In the aftermath of reignition failure, SpaceX vented the remaining unusable propellant and called it a day. But space watchers were still watching: in short order, two stories began circulating. First, an online rumor placed a UFO at the rocket’s location. A day later, analysts suggested that  the second stage might have suffered an explosion.

The first story was easily debunked when amateur astronomers identified the “UFO” as the cloud of propellant SpaceX released from the Falcon’s second stage. SpaceX itself had to weigh in on the explosion question, however. The speculation began when the blog Zarya.info pointed to some puzzling data from orbital monitoring system Space-Track.org. Space-Track.org spotted twenty space objects at the Falcon’s last location. It had expected to see eleven objects to account for the rocket bodies, released satellites, and fairing. The dispersed configuration of the objects led Zarya.info blogger and satellite watcher Robert Christy to suggest there had been an explosion.

On October 1, a SpaceX spokesperson and SpaceX CEO Elon Musk both denied the occurrence of any explosion in multiple venues. They instead offered an alternative explanation for the extra objects picked up by Space-Track.org: “It is possible insulation came off the fuel dome on the second stage and is the source of what some observers incorrectly interpreted as a rupture in the second stage,” spokesman Emily Shanklin wrote to reporters. “This material would be in several pieces and be reflective in the Space Track radar. It is also possible the debris came from the student satellite separation mechanisms onboard.”

At this time, the identification of those extra objects remains unconfirmed, as does the design element that prevented second stage reignition.

This article was written by Merryl Azriel and originally appeared on Space Safety Magazine  and can be viewed here: Falcon 9