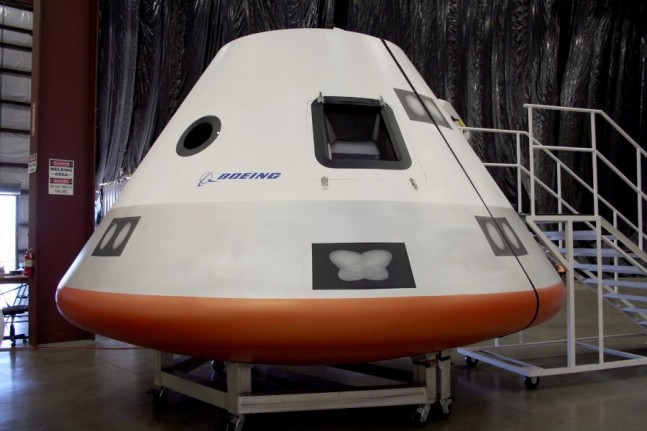 Aerojet Rocketdyne (AR ) has successfully completed its work on the various thrusters that will be used on Boeing’s entrant under NASA’s Commercial Crew transportation Capability or “CCtCap” – the CST-100 capsule. AR is part of a team of firms that are working to ready the CST-100 for its maiden test flight, slated to take place from Cape Canaveral Air Force Station’s Space Launch Complex 41 in Florida in January of 2017. The LAE would pull the CST-100 spacecraft off the top of its ULA Atlas V rocket in the event of an emergency. Image Credit: Boeing

“Over the past year, we’ve achieved major milestones that are paving the way for CST-100 to take flight,” said Terry Lorier, Aerojet Rocketdyne’s CST-100 service module propulsion system program manager. “In total, during the CCiCap contract period of performance, Aerojet Rocketdyne conducted eight Launch Abort Engine (LAE), 49 Orbital Maneuvering and Attitude Control (OMAC) system and 33 Reaction Control System (RCS) hot fire tests, all of which helped mature the system design to position Aerojet Rocketdyne to be ready to move into qualification testing early in the next phase of the program.”

The LAE is considered to be a “pusher” launch abort system, as it would rapidly “push” the CST-100 away from the United Launch Alliance Atlas V booster in the event of an emergency.

Given the success rate of the Atlas V (the rocket has only encountered a single, partial, failure out of the rocket’s 47 flights), an accident on ascent is deemed unlikely. The design of the LAE has kept this in mind when it was developed.

In the event of a nominal ascent, the LAE’s propellant and propulsion system would then be used to complete the CST-100’s nominal mission parameters to include the separation of the Crew Module (CM) from the Service Module (SM) as the CM prepares to re-enter the Earth’s atmosphere. Infographic highlighting some of the other elements of Boeing’s CST-100. Image Credit: Boeing

All of the vehicle’s propulsion requirements are handled by the CST-100’s service propulsion system. These components separate the spacecraft from the Atlas’ upper stage as well as handle docking and undocking from the only current destination in low-Earth-orbit – the International Space Station (ISS).

The CST-100, based off the Apollo spacecraft, will, like its ancestor, separate the Command from the Service Module before conducting reentry. The CM will then return the crew safely to Earth, leaving the SM, its mission complete, to burn up in Earth’s atmosphere.

Engines provided by Aerojet Rocketdyne will serve the CST-100 through the entire course of its mission. Image Credit: Boeing

Some 28 100-pound thrust-class RCS engines, which were adapted from similar engines that are already in production, will be employed as part of the suite of engines that allow the CST-100 to maneuver in space. The CST-100’s high-altitude abort attitude control, on-orbit low delta-v maneuvering functions and space station re-boost capabilities are handled by these motors. Lorier detailed how his company worked to produce the systems that will be used on the new spacecraft – while working to keep costs down. The CST-100’s RCS system will direct the path throughout the course of its mission. Image Credit: Boeing

“Under its fixed-price CCiCap contract with Boeing, Aerojet Rocketdyne is leveraging proven hardware to deliver an affordable and sustainable propulsion system that can be counted on to perform throughout the spacecraft’s mission,” Lorier said.

Should Boeing be selected to move forward with the Commercial Crew transportation Capability or “CCtCap” – AR’s efforts on the spacecraft’s propulsion systems will continue. move forward. The selection of one, possibly two, of the three primary entrants (the other two being SpaceX’s crew-rated Dragon spacecraft and Sierra Nevada Corporation’s Dream Chaser) is slated to take place in August-September of this year (2014).

As noted, Boeing is working in collaboration with other companies to produce the CST-100, these other firms include Bigelow Aerospace, AR and others to prepare the spacecraft which measures some 15 feet (4.5 meters) in diameter. Boeing was awarded an estimated $18 million to develop the CST-100 under the first phase of the Commercial Crew Program – the Commercial Crew Development or “CCDev” phase. NASA again selected the CST-100 to move forward providing an additional $93 million for the spacecraft’s continued development. Once tapped for the Commercial Crew integrated Capability, Boeing was awarded a further $460 million.

While the first flights of the spacecraft will be carried out on the Atlas V, the CST-100 is designed to be able to use either the Delta IV or Falcon 9 launch vehicles.

To help accomplish this, the company has produced a video detailing a student who daydreams of becoming an astronaut. With dramatic imagery and the inclusion of the actress playing the student in historical footage – it is hoped that the video will inspire college-aged individuals to pursue careers in terms of Science, Technology, Engineering and Math (STEM).