What have we accomplished in three years? Life after STS-135 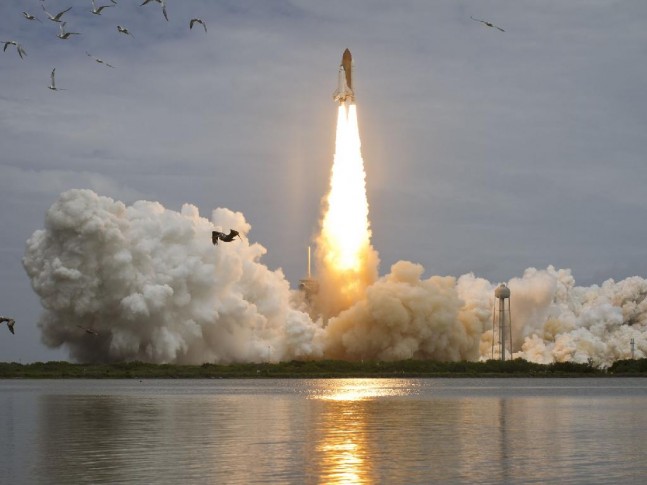 On a hot summer morning in July of 2011, Space Shuttle Atlantis launched from Launch Complex 39A at Kennedy Space Center in Florida marking the final flight of the Space Shuttle Program. It not only marked the end of the U.S.’ crewed program of record – but all signaled a potential turning point. What has the U.S. space program been up to in the three years since the last shuttle mission rolled to a halt? On September 4, 2010, NASA announced the names of the four astronauts would eventually fly Space Shuttle Atlantis for STS-135. Only then it was listed as a “rescue mission” for Endeavour during STS-134. Chrisopher Ferguson, a retired U.S. Navy captain and veteran of two previous shuttle missions, commanded the flight. U.S. Marine Col. Douglas Hurley served as pilot, and astronauts Sandra Magnus and retired U.S. Air Force Col. Rex Walheim were the mission specialists. Including their flights aboard Atlantis, the crew has flown on a combined eight space shuttle missions.

The STS-135 mission was not approved until April 2011 allowing NASA to use $5.5 billion for its space operations. That’s only 0.302% of the $18.2 billion NASA requested of the federal government.

Atlantis carried more than 9,400 pounds of spare parts, spare equipment and other supplies to the International Space Station, mostly aboard the Multi-Purpose Logistics Module Raffaello. Supplies were delivered to sustain space station operations for the following year. At 21-feet long and 15-feet in diameter, Raffaello brought back nearly 5,700 pounds of unneeded materials from the station.

With the Shuttle Program now apart of NASA’s history, many wonder why NASA is not currently sending humans into space using their own rockets. According to NASA’s FY2013 budget, the average cost of a space shuttle launch was around $450 million per mission. That’s just over $1.575 billion unadjusted. Total cost of the Space Shuttle Program hovers just over $200 billion from development through its retirement. During the Shuttle Program, there have been 202 different guests to the space station representing 15 countries. 355 Individuals flown on the Space Shuttle.

The Space Administration’s has named Orion the Multi-Purpose Crew Module as the next spacecraft to send humans in space. Using the Space Launch System (SLS), which is capable of powering humans, habitats and support systems to deep space, both systems will provide new opportunities for human and scientific exploration far beyond low-Earth orbit.

While in a meeting with the Senate Commerce, Science and Transportation Committee, NASA Administrator Charlie Bolden discussed how NASA planned to build to build this heavy lift launch vehicle (HLLV) based on the priorities of the 2010 NASA Authorization Act. He stated that the SLS program has a projected development cost of $18 billion through 2017, with $10 billion for the SLS rocket, $6 billion for the Orion Multi-Purpose Crew Vehicle and $2 billion for upgrades to the launch pad and other facilities at Kennedy Space Center.

“We’ve estimated somewhere around the $500 million number is what an average cost per flight is.”

“We don’t want to build a huge infrastructure that supports a very high flight rate — then it’d cost us a lot if we’re at substantially less than that flight rate.”

To help off-set the costs, NASA signed an agreement with the European Space Agency (ESA) on January 16, 2013, to build the service module for Orion. ESA has planned to have the module built by the Exploration Mission-1 in 2017.

What have we accomplished in 3 years after shuttle ? We still have massive unemployment in the central Florida area, 100’s of homes are left vacant, schools and businesses closed down everywhere you look. NASA keeps saying they are doing this and that, but in reality they (NASA) is slow walking everything and putting up roadblocks in front of every commercial space company except SpaceX.
Every company that wants to come to Florida to take advantage of the surplus of skilled aerospace workers has faced numerous roadblocks from NASA.