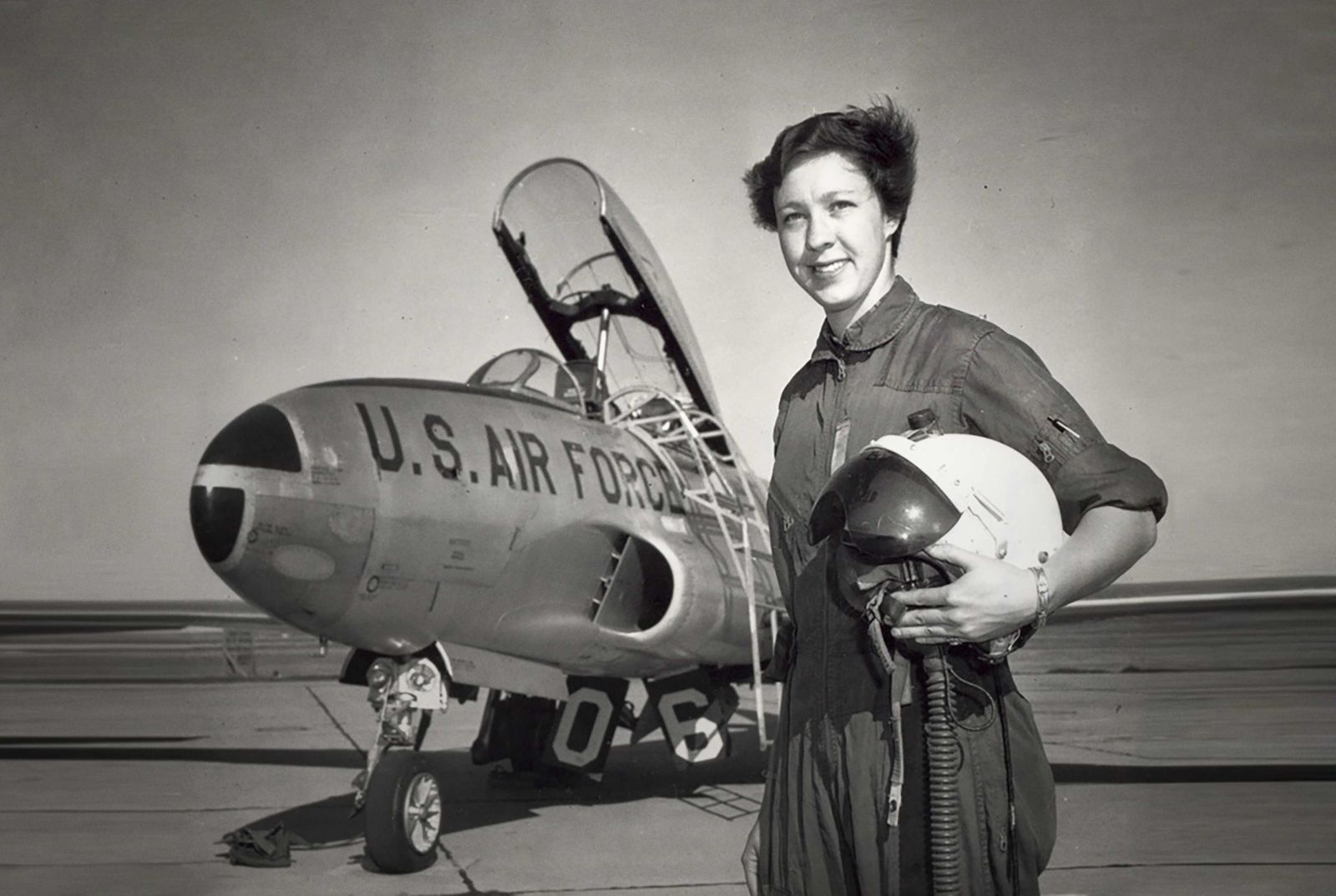 Wally Funk went through many of the same screening tests that the original Mercury astronauts underwent. However, she never got a chance to fly into space. Now the 82-year-old pilot will be joining Jeff Bezos on the first crewed suborbital spaceflight of Blue Origin’s New Shepard rocket as early as July 20, 2021. Credit: Blue Origin

On July 1, 2021, Blue Origin announced that Wally Funk, a member of the “Mercury 13,” would fly into space atop the company’s suborbital New Shepard rocket.

Mary Wallace “Wally” Funk, born Feb. 1, 1939, was the youngest of 13 candidates who graduated from the unsanctioned “Women in Space” program in the early 1960s. Ultimately the program was shelved and Funk never got a chance to fly into space, until now.

Former Amazon CEO Jeff Bezos made the announcement on Instagram on July 1, 2021, that Funk would be the fourth passenger on Blue Origin’s first crewed flight, along with the billionaire himself, his brother and a yet-to-be-named passenger who paid $28 million for their seat in a charity auction that closed last month. The flight is set for July 20.

The significance of Bezos planning to fly on the inaugural crewed flight is highly-regarded as a show of confidence in the space company’s New Shepard spacecraft, named after Alan Shepard, the first American astronaut. Even the launch date itself is significant: the anniversary of the first human Moon landing, Apollo 11

When she flies, Funk, 82, will become the oldest person to travel beyond Earth’s atmosphere. She has also booked a trip on the suborbital SpaceShipTwo plane from Virgin Galactic, which is widely regarded as a competitor to Blue Origin in the space tourism industry. 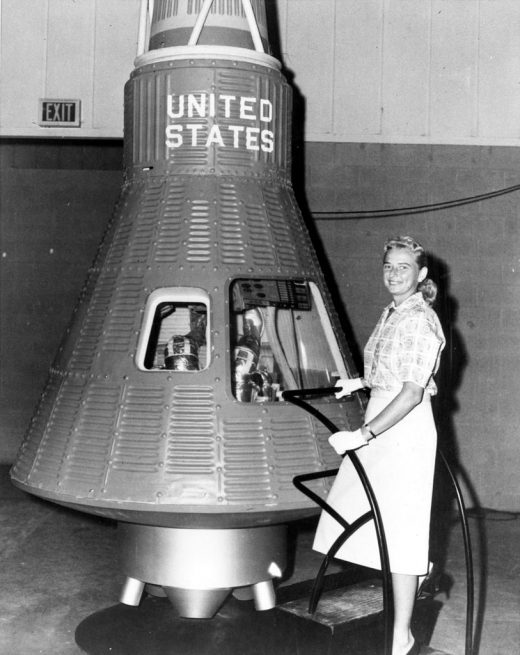 Jerrie Cobb, one of the “Mercury 13” Women in Space candidates, stands next to a Mercury capsule. Credit: NASA

Funk’s trip into space has been a long-time coming. In 1960, she got the opportunity to go through a program with the same tests as had been performed on the original male-only Mercury astronauts.

Later dubbed the “Mercury 13” in the 1990s, there were thirteen women who  underwent the same tests as the male astronauts.

The program, which was not sanctioned by NASA and was privately funded, was led by William Lovelace, a former flight surgeon and the chairman of the NASA Special Advisory Committee on Life Sciences. He also played a key role in the selection of the Mercury 7 astronauts.

In the 2018 Netflix-debuted documentary “Mercury 13,” Lovelace’s daughter, Jackie Lovelace Johnson, shared that William felt strongly about women becoming astronauts and sought to test them against the men.

Jerrie Cobb, who was an accomplished pilot, was first invited to undergo the same challenges as the men. She helped recruit more than a dozen women, including Funk.

Originally from Oklahoma, Funk was working as a civilian flight instructor at Fort Sill when Cobb called. The criteria for the women took into consideration their total flying hours, jet flying hours, parachute drops, balloon hours, flight hours over 20, 30 and 40 thousand feet and explosive decompression experience, to name of few.

At 5 feet, 8 inches tall and 125 pounds, Funk had over 3,000 flying hours at the time, including air racing. She held a commercial pilots license, a license for piloting single-engine seaplanes and a flight instructor rating. These metrics met most of the criteria needed for the five-day testing, women were not allowed to fly jets in those days, to begin phase one of the three-phase testing.

Funk was the youngest to go through the testing; on Feb. 28, 1961, her parents drove her to the Lovelace clinic, located in Albuquerque and signed her in. The tests, which took 5 days to complete, were arduous, thorough, and included having every bone and tooth X-rayed. Thirteen candidates passed out of 25, which is where the Mercury 13 moniker comes from.

Funk followed along with everyone else in 1961 as the Russians sent a man to space — Yuri Gagarin. During this time, the women were in phase two of testing in Oklahoma. 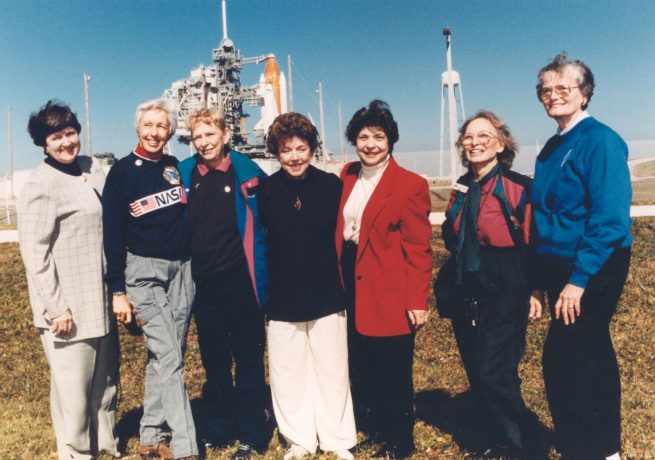 Seven of the “Mercury 13”, a group of women who participated in the ‘Women in Space’ program, pose in front of the space shuttle Discovery in 1995. They were guests of STS-63 Pilot Eileen Collins, the first female shuttle pilot and later first female shuttle commander. From left to right: Gene Nora Jessen, Wally Funk, Jerrie Cobb, Jerri Truhill, Sarah Rutley, Myrtle Cagle and Bernice Steadman. Credit: NASA

A month later, Alan Shepard would be the first American to fly into space.

Testing for Phase 3 was to be held in Pensacola, Florida, at the Naval base, in September of 1961. According to Margaret Weitekamp, a historian at the Smithsonian National Air and Space Museum, in an interview for The Verge, Lovelace had performed all the tests that could be done at his private facilities.

However, Weitekamp said that because there was no official request from the military or government (such as NASA) to perform tests, the Navy wouldn’t allow the use of the facilities. As such, the program could go no further.

Lovelace tried his best to persuade Washington and NASA by sharing the results of these tests, which he thought were superior to the men in some cases.

To no avail, some of the candidates went so far as to appear before congress, trying to solicit support for the continuance of the program. Ultimately then-Vice President Lyndon Johnson stopped the program.

In June of 1963, Russian cosmonaut Valentina Tereshkova became the first woman in space. She orbited the earth 48 times. It would be another 20 years for the United States sent its first woman into space: Sally Ride aboard the space shuttle Challenger’s STS-7 mission.

With the future of the Mercury 13 unknown, Funk was hired by Center aviation after the tests were paused. She bought herself a Stearman Aircraft and taught herself acrobatics, according to her in “Mercury 13.”

Later Funk became the first female flight instructor at a U.S. military base and the first to become an air safety investigator for the National Transportation Safety Board but she never lost her enthusiasm to go to space.

Funk said in the Netflix “Mercury 13” documentary that she thinks of flying as freedom. It’s how she feels and thinks and would also “dream of going to space.” But without a spaceship to take her there, Funk said “I had to imagine how I would go. I’m not a jet, I’m a person. I am a spirit going up.”

“I would’ve like to have walked on the Moon, put the American flag into the crust of the moon, saluted it and picked up a few rocks and do the assignments that needed to be done,” Funk said in the Mercury 13 documentary. “I could have walked on [the Moon], I could have kicked it out, could’ve made dust, because I knew the guys did and I could’ve done anything they did.”