Our Spaceflight Heritage: Venus Express begins a journey – to hell 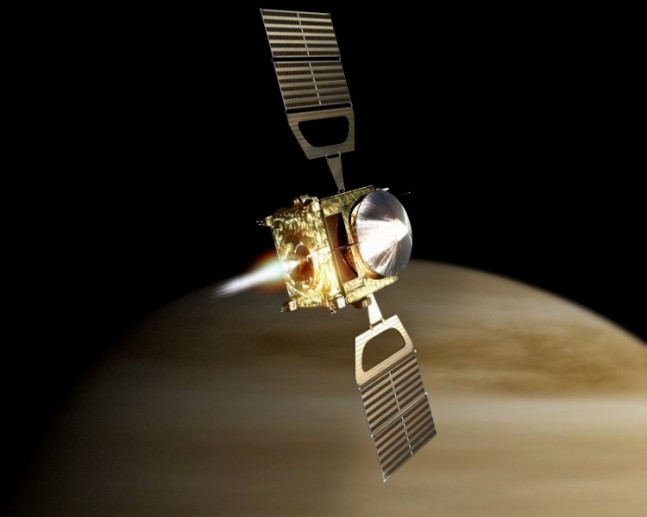 The Venus Express spacecraft was launched atop a Soyuz-Fregat rocket on Nov. 8, 2005 from the Baikonur Cosmodrome in Kazakhstan.  The Fregat upper stage was fired twice. The first ignition moved Venus Express onto a sub-orbital trajectory – and started a mission that eventually see the craft in polar orbit above Venus – providing scientists with a deeper understanding – about the threat of climate change. The Soyuz-Fregat rocket takes off with Venus Express on Nov. 8 2005. Photo Credit: ESA

The second ignition of the Fregat upper stage set the spacecraft on its way – and into interplanetary flight. Venus Express would go on to discover that Venus has been volcanically active for three million years, signifying that it might still be geologically alive.

Venus Express was designed to study the chemistry between Venus’ atmosphere and its surface. It will also study the interactions between the atmosphere and the interplanetary environment, more specifically the solar wind, to better understand the evolution of the hellish world.

The European Space Agency (ESA) has labelled Venus Express as a “virtual twin” of the agency’s Mars Express spacecraft. The body of the spacecraft, is a honeycomb aluminum box measuring about five feet wide. When its solar arrays are extended, it measure about 26-feet across, which are capable of generating 1100 watts of power.

The heating of a spacecraft is four times greater at Venus than for one orbiting Mars. Venus Express is coated in 23 layers of insulation called MLI, or “multi-layer insulation.” The MLI on Venus Express is gold instead of black because it provides a way for the spacecraft to reflect radiation and stay cool compared to Mars Express which is designed to keep warm.

After a 153 day journey, Venus Express successfully arrived at Venus on April 11, 2006.

At a distance of almost 94 million miles (151 million km) from Earth, Venus Express entered into orbit over Venus on May 7, 2006.

There are several instruments attached to the “bus” of Venus Express including a camera that monitors the planet called the VMC, which takes photos of Venus in the visible, ultraviolet, and near infrared spectrums. Based off of the High Resolution Stereo Camera (HRSC) from Mars Express and the Optical, Spectroscopic and Intrared Remote Imaging System (OSIRIS) of Rosetta, the Venus Monitoring Camera also maps the surface brightness, studies the distribution of unknown ultraviolet events in the Venusian clouds. The Analyzer of Space Plasma and Energetic Atoms (ASPERA) investigates the interaction between the solar wind and the Venusian atmosphere. It will also determine the impact of plasma processes on the atmosphere, global distribution of plasma, and neutral gas, study energetic natural atoms, and analyze other aspect of the environment. Planetary Fourier Spectrometer (PFS);

Visible/Ultraviolet/Near-infrared Mapping Spectrometer (VIRTIS) is an image spectrometer that observes near ultraviolet, visible, and infrared parts of the electromagnetic spectrum. It was analyze the layers of the atmosphere, surface temperature, and their interaction.

Venus Express Magnetometer (MAG) is designed to measure the strength of Venus’s magnetic field and direction of it. Venus Radio Science Experiment (VeRa) transmit radio waves from the spacecraft and pass them through the atmosphere to reflect off the surface. The radio waves are received by a ground station on Earth to analyze the ionosphere, atmosphere, and surface of Venus.

Ultraviolet and Infrared Atmospheric Spectrometer (SPICAV/SOIR) is another image spectrometer that is used to analyze radiation in the infrared and ultraviolet wavelengths.

The two symmetrical solar arrays attached to Venus Express are about half the size of those of Mars Express. The arrays were built using gallium arsenide (GaAs) as a structure, different from the silicon-based technology used for Mars Express.  The four layers of GaAs can tolerate up to 248 degrees Fahrenheit, so they are more suitable for hot environments.

When Venus Express is in shadow (eclipse) or power exceeds the capacity of the solar arrays, its electrical power can be supplied by three lithium-ion batteries that can be charged by the Sun.

“The spacecraft has proven to be very robust and has apparently experienced no substantial degradation in any area, but a detailed evaluation is still to take place,” says Joerg Fischer, Venus Express operations engineer.

Considering Venus Express is currently the only spacecraft actively surveying the surface of Venus, there are a few missions planned or proposed for the future including Venera-D by the Russian Federation, the Venus Entry Probe also by the European Space Agency, and Venus In-Situ Explorer (VISE) under the New Frontiers program from NASA. Venus Express has discovered that Venus was geologically active more recently in its past – than was previously believed. Image Credit: ESA

While the U.S. space agency seems fixated on the Red Planet – the Earth’s “hot sister” – has not been forgotten and NASA and other space agency’s will explore it for some time to come. Venus has proven to be one of the most hostile conditions imaginable. The pressure on the surface of Venus is some 90 times that of Earth and it has an atmosphere made up predominantly of carbon dioxide – with clouds of sulfuric acid. Space.com has cited the temperatures on the planet’s surface at around 870 degrees Fahrenheit (465 degrees Celsius).

Despite the extreme conditions on the ground, scientists back on Earth have already opened a treasure-trove of data concerning Venus.

“We have collected valuable data on the Venusian atmosphere in a region difficult to characterise by other means,” said Håkan Svedhem, ESA’s Venus Express project scientist. “The results show that the atmosphere seems to be more variable than previously thought for this altitude range, but further analysis will be needed in order to explain these variations properly.”

Do not forget the Japanese Venus mission, Akatsuki! Even though it failed to enter orbit on its first try on December 7, 2010 due to an engine failure, its controllers were able to set it on course to reach Venus for a second orbit insertion attempt in November 2015 – just one year from now.