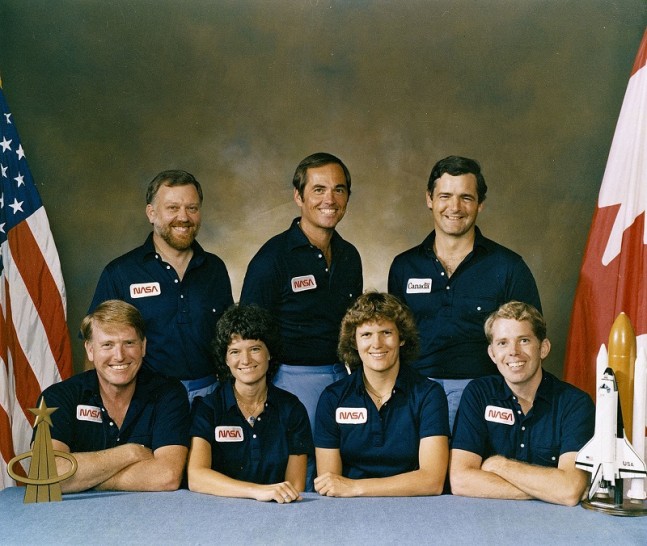 STS-41G was one for the record books, being the first shuttle flight to feature two female astronauts, Sally Ride and Kathy Sullivan. Launching aboard Space Shuttle Challenger from Pad 39A on October 5, 1984 at 7:03 a.m. EDT, the crew was led by Commander Bob Crippen and Pilot Jon McBride. Along with Ride and Sullivan, the crew also included David Leestma as Mission Specialists and Marc Garneau and Paul Scully-Power as Payload Specialists. The crew of STS-41G had several mission objectives, including deploying the Earth Radiation Budget Satellite (ERBS), which occurred less than nine hours into the flight. Challenger also carried many experiments in her payload bay, such as the Office of Space and Terrestrial Applications-3 (OSTA-3); Large Format Camera (LFC); IMAX Camera, which flew for the third time; Canadian Experiments (CANEX); Auroral Photography Experiment (APE); Radiation Monitoring Equipment (RME); and the Thermoluminescent Dosimeter (TLD).

ERBS was a special three-satellite project designed to measured the amount of solar energy absorbed in different regions of Earth, and the amount of thermal energy emitted back in space. Over the course of one year, its primary goals were to determine the Earth’s average monthly regional, zonal, and global radiation budget; record the seasonal movement of energy from the tropics to the poles; and the average daily variation in radiation on a 621-mile regional scale for each month.

The experiment’s three sets of satellite-mounted instruments were managed by both NOAA and NASA’s Goddard Space Flight Center. The first set, deployed on STS-41G, with the second and third sets, scheduled to launch over the following three years. Each ERBE package consisted of two instruments, using seven radiometer sensors to measure various levels of energy from the Earth’s atmosphere and one to measure solar intensity. Also a part of STS-41G, was NASA’s Office of Space and Terrestrial Applications-3, operating out of the orbiter’s cargo bay. Visible data of the Earth was recorded on film, with the help of the radar antenna. In order to get the best viewing angles, the antenna could be unfolded in orbit. The OSTA-3 recorded photographic and radar images of the Earth’s surface, measured the global distribution of tropospheric carbon monoxide, and attempted to classify autonomous scenes. The resulting images were used for creating maps and interpreting geopolitical features for resource studies. This was the first flight to use the Large Format Camera. The 900 pound “space eye” produced up to 2,400 negatives from 70 pounds of film, including two types, each of black and white and color. The idea to build this camera came from the advancement in optics and electronics from previous instruments built for Apollo, Skylab, and the Viking Mars landers. When the LFC was calibrated, the camera assisted in the exploration for oil and mineral resources, mapping and monitoring the Earth’s environment. The camera was manufactured for NASA by the Itek Optical Systems Division in Boston, Mass. and led by Principal Investigator Bernard H. Mollberg at Johnson Space Center.

The Radiation Monitoring Equipment was used to measure any gamma radiation exposure the crew came in contact with, while they were in the orbiter’s cabin. The experiment consisted of two handheld radiation monitors, Gamma and Electron Dosimeter and a Neutron and Proton Dosimeter. This experiment featured equipment developed by the prestigious Central Research Institute for Physics, out of Budapest, Hungary. Data was collected several times throughout the mission and analyzed later.

After their mission was completed, Challenger and her crew returned home on October 13, 1984, traveling an impressive 3.3 million miles in 8 days, 5 hours, 23 minutes, and 38 seconds.