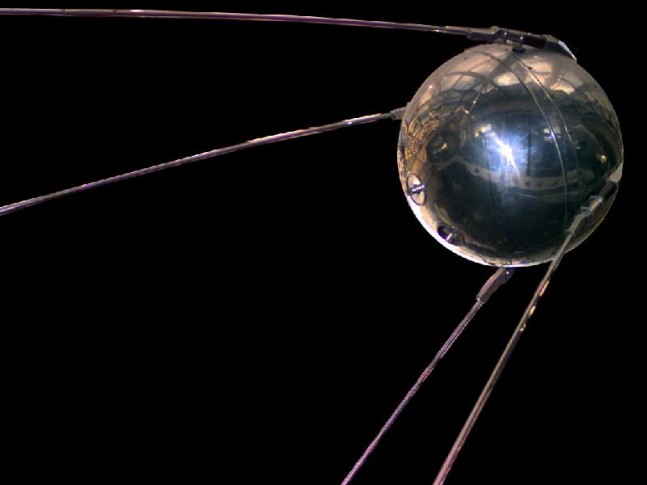 History was made on Oct. 4, 1957. More than fifty years ago, the U.S.S.R. launched its first satellite, Sputnik 1, and with it, the Space Age. The launching of the beach ball sized satellite spurred a revolutionary new era of exploration and sparked a historic competition between the United States and the U.S.S.R. This ultimately paved the way for new political, military, technological, and scientific developments. Sputnik 1 captured the world’s attention and incited public fears that this launch signified the Russians were capable of launching nuclear weapons – directly onto U.S. soil.

Sputnik was developed by the Soviet Union in 1956, after President Dwight D. Eisenhower  announced on July 29, 1955 that the United States was planning to launch its first satellite the following year in celebration of the International Year of Geophysics. Sputnik’s primary mission was to place a radio transmitter in orbit. The spacecraft was manufactured by the Soviet Ministry of Radio-Technical Industry under the lead Soviet engineer – Sergei Korolev. In February of 1954, he lobbied the Kremlin with his proposal stating that: “the satellite is an inevitable stage of the path of rocket development, which would make possible interplanetary travel.”

Sputnik 1 measured a mere twenty-three inches (58 cm) in diameter, weighed 184 pounds (83 kg) and had four external radio antennas attached to it, in order to broadcast radio pulses. Fully pressurized with nitrogen, the spacecraft continued orbiting the Earth every 98 minutes along an elliptical path. The mission took 92 days and 1,440 orbits to complete.

The launch of Sputnik 1 changed the way that the world viewed the Soviet Union, and caught the United States completely off-guard. With the failures of two Vanguard launches behind them, the U.S. began work on the Explorer project. By the time the Americans launched Explorer 1 on Jan. 31, 1958, the Soviets had already launched Sputnik II, which carried a dog named Laika to orbit.

The U.S.S.R.’s launch of Sputnik is a direct link to the formation of NASA. The following year, in July 1958, Congress passed the National Aeronautics and Space Act, officially creating the Space Agency by combining the National Advisory Committee for Aeronautics (NACA) and other government agencies.