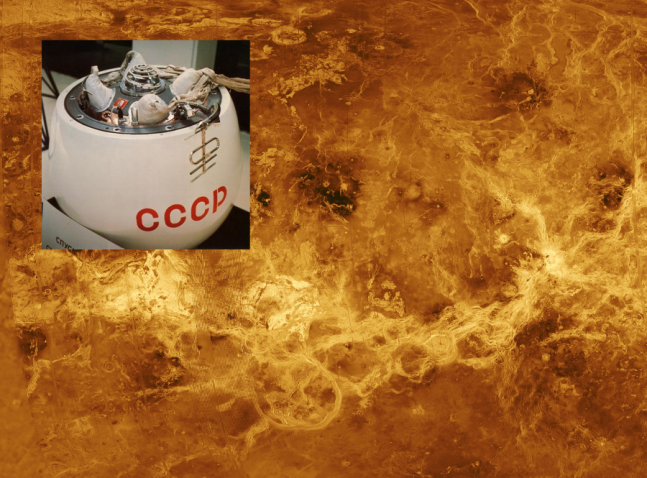 Although the public’s attention, in terms of space exploration, might be focused on Mars – it is not the only terrestrial world that humanity has sent spacecraft to. On this date in 1970, the former Soviet Union (now Russia) became the first nation to land a spacecraft on the hostile plains of Venus. The Venera 7 spacecraft touched down on Dec. 15, 1970 and transmitted data back to Earth for a short while – despite surface temperatures reaching approximately 887 degrees Fahrenheit.

The Venera 7 spacecraft – was actually one of two identical spacecraft that were sent to the “twin” of our home world – during the August 1970 launch opportunity. Its sister mission, Cosmos 359 – never left Earth’s orbit.

Venera 7 had a rather straight forward series of objectives, return data from Venus, land and then upon landing – continue to send data back about the Venusian environment. The craft made history when it accomplished all three, making it the first craft to land on another world.

There was little actually new about Venera 7, being modeled after the Venera 5 and 6 spacecraft that preceded it. Essentially a spherical landing probe with a bus that held it, the vehicle was designed to be able to withstand the intense pressures and temperatures that are the norm on Venus (864 degrees Fahrenheit – 462 degrees Celsius).

In many ways, Venera 7 was, in essence, a pot, with no seams, holes or welds and it was constructed of a material meant to absorb the impact of landing. The lander’s pressure vessel was made out of titanium with shock-absorbing material lining it. The craft weighed in at 1,080 lbs (490 kg) and had a parachute that measured about 2.5 square meters.

The scientific instruments that it carried included a resistance thermometer, a aneroid barometer, solar wind detector and a cosmic ray detector.

The probe separated from the bus that held it and entered into the Venusian night. After it completed an aerodynamic braking maneuver, the top hatch was jettisoned and the parachutes deployed at an altitude of some 37 miles (60 kilometers). The chutes only remained with the probe for about six minutes before they were ripped and collapsed – leaving the Venera 7 lander to fall to the surface – for almost 30 minutes.

The signals sent back from the surface of Venus – were weak and it took some time before Soviet scientists realized that the probe had transmitted back to Earth – for about 23 minutes. It is believed that the lander might have landed once before settling on the surface, coming to rest on its side. The landing point was 5 degrees S, 351 degrees E.