Our Spaceflight Heritage: Remembering the Christmas flight of STS-103 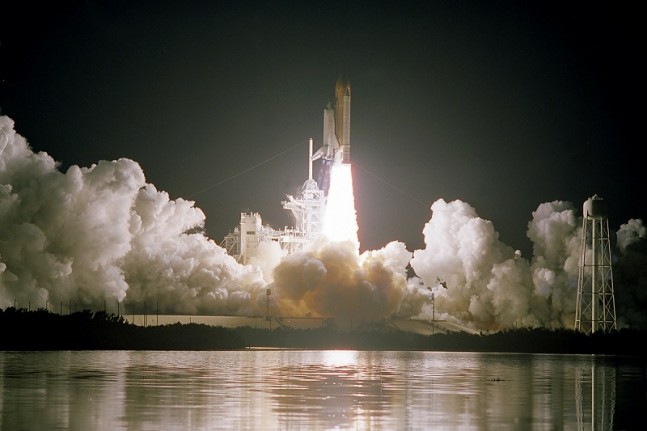 STS-103 Crew. In front are, from left, astronauts Nicollier, Kelly and Grunsfeld. Behind them are Smith, Foale, Brown, and Clervoy. Photo Credit: NASA

STS-103 lifted off from Kennedy Space Center in Florida from Launch Complex 39B. Along with Commander Brown, the 27th flight of Discovery left the Pad at 7:50 p.m. EST (0055 GMT) with Pilot Scott Kelly and five Mission Specialists on their way to service the famed space-based observatory after its four gyroscopes failed.

The mission was originally scheduled for June 2000, but NASA’s mission managers decided that when three of the gyroscopes malfunctioned on Nov. 13, 1999, Hubble needed to be quickly repaired to have the means to point precisely at distant astronomical targets for scientific observations.

Before Discovery’s Dec. 19 launch date, STS-103 encountered several scrubs due to mechanical and weather issues. After an inspection on the entire shuttle fleet conducted on Oct. 28, 1999, the launch date was moved to several dates between mid-November and early December of the same year due to worked required to the vehicle’s wiring.

On one occasion, a half-inch drill bit was found lodged in the shuttle’s main engine. Another repair was conducted on Dec. 9 when additional damaged wiring was found between the orbiter and its external tank. The last scrub, one lasting 24 ours,  occurred on Dec. 17 when launch control managers noticed the 80 percent chance of unfavorable weather. With Discovery on its way to Hubble, the mission was shortened from 10 to 8 days to avoid flying during the Shuttle Program’s Year of 2000 transition where systems were restored and upgraded for the new century. The amount of equipment in Discovery’s payload bay was sent to the Space Center by a C-5 transport aircraft. The shuttle brought almost 37,000 pounds (17,000 kg) of hardware to service the telescope.

Hubble was built to calibrate the distance of the universe and to measure the luminosity of variable stars in distant galaxies.  Its continued operation began with the first repair of the flight led by Mission Specialists Steven Smith and John Grunsfeld. The astronauts replaced Hubble’s six gyroscopes and installed Voltage/Temperature Improvement Kits on wiring from Hubble’s solar arrays to each of its six batteries. The kits are designed to improve control of the charging of the space telescope’s 10-year-old batteries.The eight hour, fifteen minute spacewalk remains one of the longest in NASA’s history. The second EVA for the telescope included Mike Foale and European Space Agency astronaut Claude Nicollier to replace Hubble’s outdated DF-224 computer with a more modern unit 20 times faster and with six times the memory. They also swapped out one of Hubble’s three fine guidance sensors, used to precisely point the telescope and gather scientific data.

With each of the three spacewalks lasting over eight hours each, the final space walk brought the total time of STS-103 extravehicular activity to 24 hours and 33 minutes.

On Dec. 25, 1999, the STS-103 crew returned Hubble to orbit after repairing the telescope. Mission Specialist Jean-François Clervoy used the shuttle’s robotic arm to gently release the telescope, then placed the arm upright as Commander Brown fired Discovery‘s steering jets to separate from the telescope. With the third servicing upgrades complete, Discovery reached the highest orbit in the Shuttle Program’s history, orbiting 378 miles (609 km) above Earth.

Discovery and her crew orbited the Earth 120 times with a mission that lasted 7 days, 23 hours, and 11 minutes. With Commander Brown at the controls, Discovery glided to a landing on Runway 33, the three mile long Shuttle Landing Facility in Kennedy Space Center at 7:01 p.m. EST.

The end of the STS-103 mission marked the 20th consecutive landing at Kennedy Space Center’s Shuttle Landing Facility and the 13th night landing in the history of the Shuttle Program. This was the shuttle’s last solo flight. The following missions, until its last with STS-133 in 2011, were all to service the International Space Station.