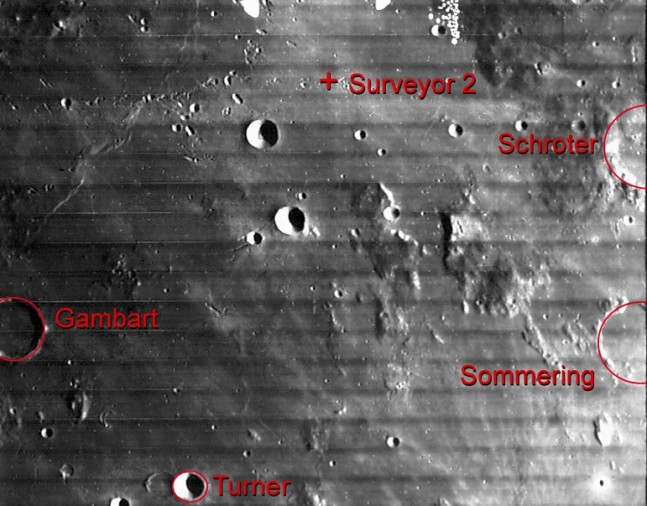 On September 20, 1966, Surveyor 2 was intended to land in Sinus Medii, a different area of the Apollo zone. The spacecraft was designed as a follow-up to the highly successful Surveyor 1 mission and was the second of seven lunar landers, tasked with collecting lunar data in preparation for NASA’s Apollo missions. When a planned mid-course maneuver for Surveyor 2 was attempted, one of the vernier engines failed to ignite, causing the spacecraft to tumble due to an unbalanced thrust. Attempts to save the spacecraft failed when it lost control, and crashed into the Moon roughly southeast (5.5N, 12 W) of Copernicus Crater on September 22, 1966. The Surveyor program involved building and launching 7 Surveyor spacecrafts to the Moon at a total cost of $469 million.

The objectives of the Surveyor Program were to:

(1) develop and validate the technology for landing softly on the Moon;

(2) provide data on the compatibility of the Apollo design with conditions encountered on the lunar surface; and

(3) add to the scientific knowledge of the Moon.

No experiments or data collection were returned from this mission.