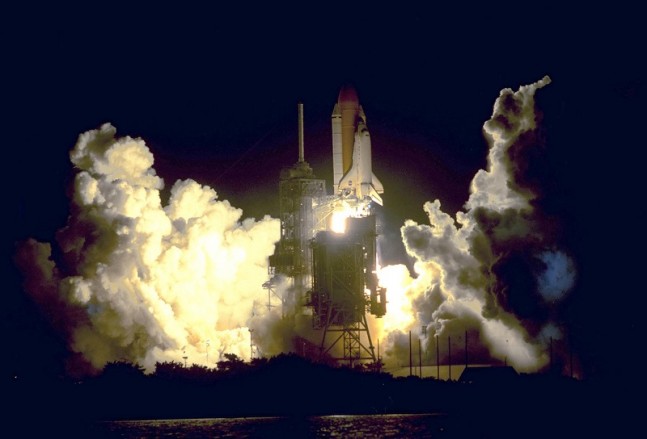 The moment space shuttle Discovery launched from Launch Complex 39A at Kennedy Space Center in Florida, the seven person crew of STS-92 embarked on a long journey to help begin construction of the International Space Station. During the first six days of the mission, Discovery’s five Mission Specialists performed four spacewalks. Liftoff occurred at 7:17 p.m. EDT (23:17 GMT) on Oct. 11, 2000. The twelve-day mission to the International Space Station marked the 100th flight of the Shuttle Program. The objectives of STS-92 were created with two goals in mind. The first was to deliver and install the Z1 Truss and the second was to install the Pressurized Mating Adapter 3 (PMA-3) for future missions.

Discovery’s crew was led by Commander Brian Duffy and Pam Melroy, who become only the second female to pilot one of NASA’s orbiter fleet. The mission also included Michael López-Alegría, Leroy Chiao, William S. McArthur, Koichi Wakata of the Japanese Aerospace Exploration Agency (JAXA), and Jeff Wisoff. All signed on as Mission Specialists.

Crewmembers completed four extravehicular activities (EVA) outside of the station. Beginning on October 15, the mission specialists conducted demanding tasks required to install the Z1 Truss, and PMA-3 on to the station’s Unity module. On flight day three, Wakata maneuvered Discovery’s robotic arm to lift the Z1 Truss from the shuttle’s payload bay to the port side of Unity. Once it was attached, Melroy and crewmate Wisoff opened the hatch of Unity and installed the grounding connections between the module and the station.

Mission Specialists Chiao and McArthur began the first EVA of the mission of flight day five. The six-hour, 28-minute spacewalk included tasks of connecting the electrical umbilical cords to provide power to the heaters and conduits on the Z1 Truss. Chiao and McArthur also relocated and deployed two communication antennas and installed a toolbox used during on-orbit construction. Both astronauts also performed the third spacewalk on flight day seven which took place on Oct. 17, 2000. Taking an extra twenty minutes longer than the first EVA, they installed two DC-to-DC converter unites atop the Z1 Truss for conversion of electricity generated by the space station’s solar arrays to the proper voltage. On the fifth day of STS-92, astronauts López-Alegría and Wisoff completed the second spacewalk of the flight within seven hours and seven minutes. The mission specialists attached PMA-3 to the station, and prepared for the installation of the new solar arrays, which were scheduled to be connected to the Z1 Truss in the following shuttle mission. López-Alegría and Wisoff also led the final EVA of the mission on flight day eight which lasted six-hours and forty-eight minutes. They deployed a tray that would be used to provide power to the U.S. Laboratory, and removed the grapple fixture from the Z1 Truss.  The astronauts also tested the Simplified Aid for EVA Rescue (SAFER), essentially an astronaut “life jacket”. The  two SAFER backpacks are nitrogen-powered jet packs, and designed to be used in emergency situations and were not a replacement for tethers. The total number of hours spent by all five mission specialists outside the orbiting laboratory was 27 hours and 19 minutes.

Flight day nine was filled with the STS-92 crew checking the connections of the Z1 Truss external framework and began transferring equipment and supplies for STS-97, the following mission. They also successfully completed the testing of the Control Moment Gyroscopes (CMGs), which provided non-propulsive (electrically powered) attitude control when activated after the U.S. Laboratory was installed. The CMGs are used to maneuver the space station into proper orientation as it orbits Earth.

STS-92 concluded when space shuttle Discovery landed in the Mojave Desert at Edwards Air Force Base in California on October 24, 2000. The mission’s total elapsed time was twelve days, twenty-one hours, and forty-three minutes.

SpaceFlight Insider spoke with the mission’s commander, Brian Duffy about this flight. This is what he had to say about his final mission into the black.

“Flying the mission capped off one of the best experiences of my life. Our crew trained together for 2 ½ years getting ready for the flight, and we couldn’t have been more prepared.  I’m so proud of the job we all did, and we had a blast doing it.  The STS-92 crew was truly a professional and talented group. After the flight, everyone who stayed in the Program became a Commander of a space vehicle……that might be unprecendented, but not a surprise to those who know the individuals. It was an honor to be a part of the crew,” Duffy said.