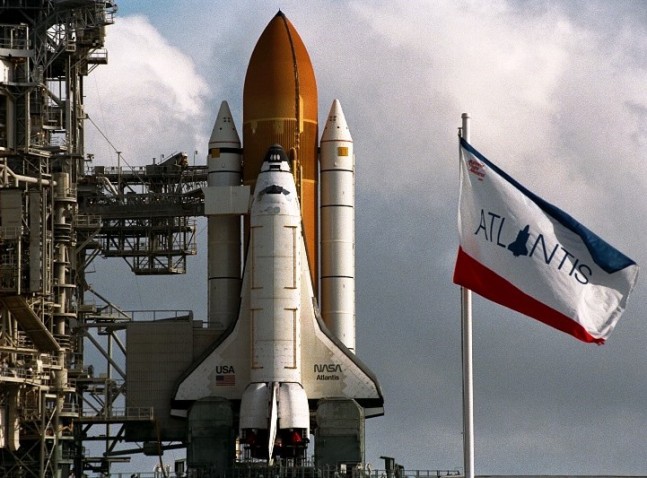 On September 26, 1997, six NASA astronauts and one Russian cosmonaut launched on Space Shuttle Atlantis from Kennedy Space Center’s Launch Complex-39A in Florida to complete its seventh docking to the Mir space station. This mission carried SPACEHAB, the double module used for docking with Mir for cargo transfer and astronaut exchange. The previous Shuttle-Mir missions were STS-71, STS-74, STS-76, STS-79, STS-81, and STS-84 and served as a precursor to the eventual collaboration between the U.S. and Russia on the International Space Station. Wolf switched places with Michael Foale. Lawrence had been scheduled to replace Foale, who was her backup, but due to size restrictions of the MIR-Orlan space suit, Foale was chosen. The first joint U.S.-Russian EVA took place during the mission, which was also 39th in the Space Shuttle program, was conducted by Titov and Parazynski. The five hour, one minute long space walk took place on Oct. 1 when the pair affixed a 121 pound Solar Array Cap to the docking module for future use by the Mir crew members. During the flight, Wetherbee and Bloomfield fired small jet thrusters on Atlantis to provide data for the Mir Structural Dynamics Experiment (MISDE), which was an instrument designed to measure the structural vibrational forces of how Mir moves, bends, and twists during events such as the impact of the shuttle docking with the Mir.

Two NASA educational outreach programs were also conducted, Seeds in Space-II and Kidsat. Foale returned to Earth after spending 145 days in space which 134 of them were aboard Mir. He holds the most time in space for a citizen of the United Kingdom with cumulative hours of 374 days, 11 hours, 19 minutes.

Atlantis landed on Oct. 6 at Kennedy Space Center’s Shuttle Landing Facility. The Shuttle-Mir project would mark the beginning of the International Space Station program, which would see some 16 different nations cooperate on orbit. Atlantis would serve an integral part in the construction of the ISS, carrying out 12 flights to construct the orbiting laboratory.