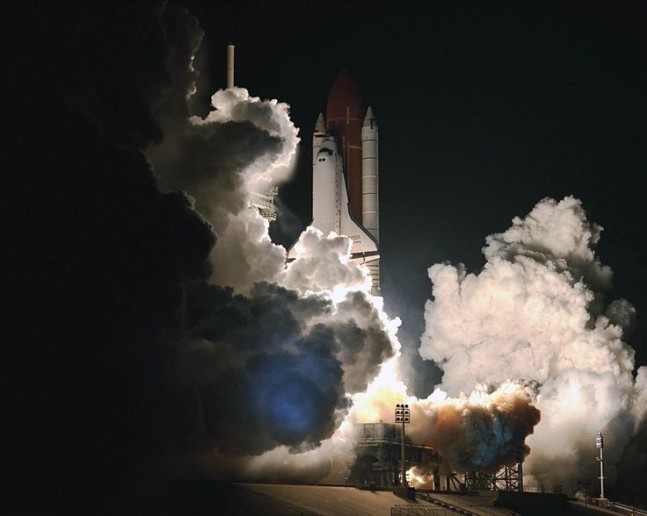 On Oct. 18, 1989, a group of astronauts launched aboard space shuttle Atlantis from NASA’s Kennedy Space Center. The shuttle carried some very special cargo, Galileo, an unmanned spacecraft heading for the Jupiter. It was the first planetary orbiter to carry out an extended observation of the Jovian system and it was charged with collecting a sampling of Jupiter’s atmosphere. Galileo was also the first to capture photos of asteroids that it flew past. STS-34 has the distinction of being the second space shuttle mission to deploy a planetary spacecraft. The first, STS-30, launched Magellan earlier in the same year on May 4.

The launch was rescheduled from Oct. 12, 1989 when the Space Shuttle Main Engine (SSME) controller for the number two main engine was determined to be faulty. Atlantis was then rescheduled to fly on Oct. 17, but was given a “No-Go” for launch, due to inclement weather, a common occurrence given the turbulent conditions along Florida’s Space Coast.

Prior to flight, in 1987, it was determined that Galileo would need to conduct multiple gravitational assists, known as Venus Earth Earth Gravity Assist maneuvers (VEEGA). The spacecraft whizzed around Venus once, and Earth twice, gaining gravitational assists from the two worlds. Galileo was on its way to Jupiter and even observed asteroids Gaspra and Ida along the way.

Galileo inserted itself into orbit around Jupiter on Dec. 8, 1995. For the next 198 days, the spacecraft captured images of Jupiter, its moons, and even video of comet Shoemaker-Levy 9 crash into the giant planet. Galileo’s orbits were carefully planned, bringing it close to two of Jupiter’s moons, Europa and Io. However, researchers were careful to limit the time around Io, as to help shield Galileo from dangerous radiation. Galileo lost the use of its cameras in 2002, and subsequently ended its mission on Sept. 21, 2003, by being deorbited into Jupiter.

Several anomalies occurred during STS-34; however, none had a direct impact on the mission itself. The anomalies included, minor issues with the Flash Evaporator System for the orbiter, and the cryogenic oxygen manifold 2. This mission was a hot topic for many, and even drew in a large amount of protesters due to the nuclear radioisotope thermoelectric generator (RTG ) powering the Galileo spacecraft. During launch, there were several issues, almost forcing the crew to abort. To avoid an “international incident” by landing a nuclear device in another country, the crew went ahead with the mission, and were able to complete it successfully.

Atlantis successfully landed on Runway 23 at Edwards Air Force Base in California at 9:33 a.m. EDT (1323 GMT) on Oct. 23, 1989. The landing was moved up a few days and the orbiter was forced to land in California due to weather related issues. The orbiter was returned to Kennedy Space Center six days later, 61,615 lbs (27,948 kg) lighter. The mission lasted only 4-days, 23-hours, and 39-minutes long – but traveled two million miles while orbiting the Earth.