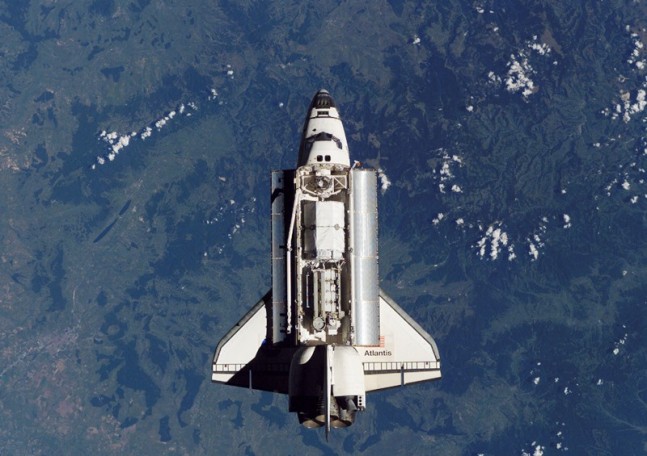 On September 9, 2006, the STS-115 crew of space shuttle Atlantis launched at 11:15 a.m EDT (1515 GMT) from Kennedy Space Center’s Launch Complex 39 in Florida. Led by Commander Brent Jett and Pilot Chris Ferguson, the mission included the addition of the P3/P4 truss structure. After the  two return to flight missions of STS-114 and STS-121, the STS-115 was a return to major assembly of the International Space Station.  The flight as included Dan Burbank, Steve MacLean, Heide Piper, and Joe Tanner as mission specialists.

With the successful test of the space shuttle’s safety improvements of STS-114 and STS-121, NASA was prepared for getting back to building the space station. The mission included robotic operations, improved imagery during launch, heat inspections of the Atlantis’ tiles while in orbit, as well as a backflip that became apart of mission routine for the remaining flights of the shuttle program. NASA Astronaut Joseph Tanner works on the P3/P4 truss in the first of three EVAs during STS-115. Photo Credit: NASA

Three EVAs (extra-vehicular activity or “spacewalk”) were carried out to put the new P3/P4 truss in service. Spacewalkers Joe Tanner, Heidemarie Stefanyshyn-Piper, Dan Burbank and Steve MacLean connected power cables and activated gear readying the P3/P4 and its unfurled solar arrays for power generation. Each spacewalker camped out inside the Quest Airlock on the International Space Station to reduce the time the astronauts breathe pure oxygen and avoid decompression sickness, which is commonly known as “the bends.” Atlantis and her crew delivered the space station’s first Solar Alpha Rotary Joint, a 10-foot wide joint in the shape of a wagon wheel that allows the arrays to turn towards the Sun.

On flight day four, Piper and Tanner performed a six hour and twenty-six minute EVA to install power and data cables between the P1 and P3/P4 truss structures in preparation for the solar array deployment.  The next day (FD-5), Burbank and MacLean removed launch docks and restraints on the solar array joint to track the sun. They also prepared the P3 truss to be used by the mobile transporter, which allows the CanadaArm2 to move along the integrated truss structure. The spacewalk was completed in seven hours and eleven minutes. On flight day six, the crew successfully completed the deployment of the new solar arrays, which fully stretch to 240 feet long. They also moved  the station’s robotic arm from the Mobile Base System to the Destiny Laboratory Module. The final spacewalk was completed in six hours, forty-two minutes and was preformed by Piper and Tanner. STS-115 with Atlantis was the 116th flight since the beginning of the space shuttle program with STS-1 in 1981. It was also the third mission after the Columbia accident and the first post-Columbia flight of Atlantis.