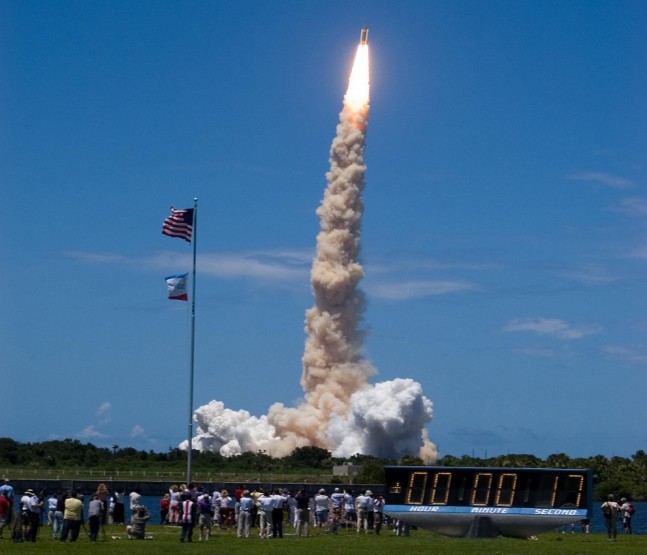 On Independence Day, July 4, 2006, space Shuttle Discovery lifted off at 2:37 p.m. EDT with six astronauts aboard and two tons of cargo to be delivered to the International Space Station, including the fourth trip for the Multi-Purpose Logistics Module (MPLM) Leonardo. The STS-121 and Expedition 13 crewmembers gather for a group photo. From the front row left are Reiter, Vinogradov and Williams. On the middle row left are Wilson, Lindsey and Nowak. On the top row left are Sellers, Fossum and Kelly. Photo Credit: NASA

Led by commander Steve Lindsey and pilot Mark Kelly, the STS-121 crew included mission specialists Michael E. Fossum, Lisa M. Nowak, Stephanie D. Wilson, Piers J. Sellers, and Thomas A. Reiter of the European Space Agency. Reiter would join Expedition 13 Commander Pavel Vinogradov and Flight Engineer and NASA Science Officer Jeffrey Williams, the first crew aboard ISS to include three astronauts since the Expedition 6 crew returned to Earth May 4, 2003. The Expedition crew also became the first to include an American, a Russian and a European. This was the first spaceflight for Fossum, Nowak, and Wilson and the second for Kelly and Sellers. The purpose of STS-121 was to test new equipment and procedures for the inspection and repair of the thermal protection system that is designed to increase the safety of the Space Shuttles. Italian built MPLM Leonardo carried a Minus Eighty Degree Laboratory Freezer (MELFI), a European Modular Cultivation System (EMCS) for biological experiments, a new oxygen generation system in the Zvezda module, and a Cycle Ergometer with Vibration Isolation System (CEVIS) cycling machine installed in the Destiny Laboratory module. On July 5, Discovery’s crew focused on inspecting the orbiter’s thermal protection system. As Discovery approached the space station for docking, the shuttle was positioned so a series of inspection photos could be taken of its underside. Photo credit: NASA

The inspection took several hours and the astronauts found no evidence of any damage from the flight. During flight day four, the astronauts removed the Leonardo module from Discovery’s payload bay using the shuttle’s robotic arm to attach it to the Unity module of the International Space Station. After Leonardo was in place, they began unloading more than 7,000 pounds of equipment and supplies. When the module was emptied out, it was refilled with almost 4,400 pounds of unneeded and broken equipment, scientific experiment results and trash for transport back to Earth. STS-121 included three spacewalks which were all carried out by Sellers and Fossum. The first EVA during flight day five lasted seven and a half hours while Sellers and Fossum tested the 50-foot (15 m) Orbital Boom Sensor System extension to the robotic arm. Post-flight walk-around after landing, the STS-121 crew pose for a photo in front of Discovery. Photo credit: NASA/Kim Shiflett

Wilson and Nowak used the station’s robotic arm to return the Leonardo module to Discovery’s payload bay on July 14. Undocking from the station occurred at 6:08 a.m. the next day to begin the two-day trip back to Earth. On July 17, Discovery’s deorbit engines were fired for three minutes at 8:07 a.m. EDT above the Indian Ocean to begin the descent.

Discovery touched down on runway 15 at the Shuttle Landing Facility at 8:15 a.m. EDT, completing 12 days, 18 hours and 38 minutes in space covering 5.3 million miles. STS-121 was the only space shuttle mission that launched on the United States’ Day of Independence.