Our Spaceflight Heritage: A rare view of Endeavour 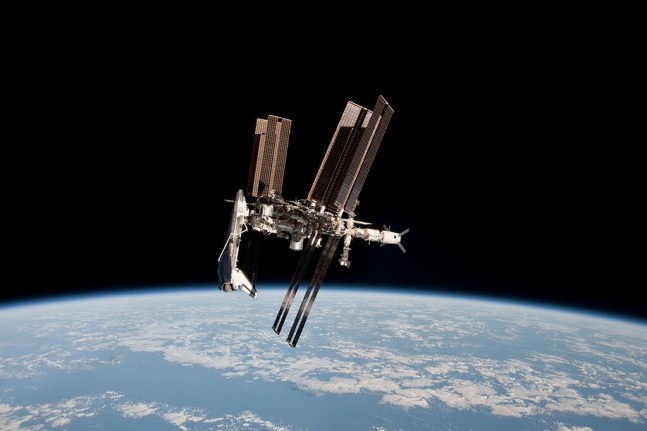 Endeavour, flying at an altitude of approximately 220 miles, was taken by Expedition 27 crew member Paolo Nespoli from the Soyuz TMA-20 following its undocking on May 23, 2011 Photo Credit: NASA

Three years ago, on May 23, 2011, Paolo Nespoli took the first pictures of a shuttle docked to the International Space Station (ISS) from the perspective of a Russian Soyuz spacecraft. Not only was this the first picture of  Endeavour docked to the ISS, it was also the first image of any shuttle docked to the station (from this perspective).  The shuttle mission, STS-134, carried astronauts Mark Kelly, Greg Johnson, Greg Chamitoff, Michael Fincke, Roberto Vittorio (European Space Agency), and Andrew Feustel to the orbiting laboratory along with a diverse payload that included the Alpha Magnetic Spectrometer 2, the ExPRESS Logistics Carrier 3, a component to test out guidance and navigation equipment for NASA’s new Orion spacecraft and much more.

On board the Soyuz were Russian cosmonaut and Expedition 27 Commander Dmitry Kondratyev, European Space Agency (ESA) astronaut and Flight Engineer Paolo Nespoli and NASA astronaut and Flight Engineer Cady Coleman. With former station commander Dmitry Kondratyev manually controlling the spacecraft, ESA astronaut Paolo Nespoli climbed into its habitation module and documented the view of the station and shuttle from a distance of about 600 feet. Kondratyev, Nespoli and NASA astronaut Cady Coleman were returning home on the Soyuz, landing in Kazakhstan at 9:26 p.m. and completing 159 days in space.