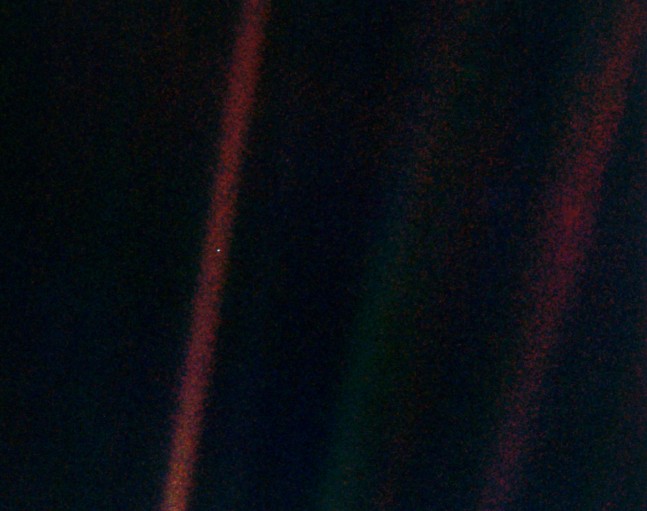 The Pale Blue Dot: from Voyager's great distance Earth is a mere point of light. This narrow-angle color image of the Earth is a part of the first ever "portrait" of the solar system taken by Voyager 1. Image Credit: NASA

Twenty-five years ago, a space probe took one of the most important images of all time. On Feb. 14, 1990, NASA’s Voyager 1 spacecraft turned back towards the Earth, and snapped the first image of Earth taken from a distance of 3.7 billion miles (6 billion kilometers). Dubbed “The Pale Blue Dot”, the image is part of a family portrait — a snapshot of our solar system — from beyond the gas giant Neptune.

“Twenty-five years ago, Voyager 1 looked back toward Earth and saw a ‘pale blue dot,’ ” an image that continues to inspire wonderment about the spot we call home,” said Ed Stone, project scientist for the Voyager mission, based at the California Institute of Technology, Pasadena.

This “family portrait” captures Neptune, Uranus, Saturn, Jupiter, Earth and Venus from Voyager 1’s unique vantage point. A few key members did not make it in: Mars had little sunlight, Mercury was too close to the Sun, and dwarf planet Pluto turned out too dim.

Voyager’s original plan did not include these images, but the late Carl Sagan, part of the Voyager imaging team, had an idea. He suggested pointing the probe back towards Earth, for one final look at its home. Many felt by turning the camera toward the Earth, and as a result towards the Sun, might damage the sensitive camera equipment aboard the probe. Sagan argued the images would show us our place in the universe, and with the help of NASA administrator Richard Truly and many others, Voyager 1 was able to take this iconic photo.

The image we see is Earth back-lit by scattered light, much like a sunbeam. The light is actually an effect of the camera and the magnification process, making our tiny home world appear more dramatic. At the time of this photo, Voyager 1 was approximately 40 astronomical units (AU) from the Sun. To give a sense of scale, one AU is equivalent to 93 million miles (150 million kilometers). The first ever ‘portrait’ of the solar system taken by Voyager 1. From left to right and top to bottom are Venus, Earth, Jupiter, and Saturn, Uranus, Neptune. Image credit: NASA

Today, Voyager 1 is three times farther from Earth than it was when these images were taken. At a distance of 130 AU, Voyager 1 is now the farthest human-made object from Earth, and is still beaming back data. In Aug. 2012, the probe officially left the solar system and entered interstellar space.

“After taking these images in 1990, we began our interstellar mission. We had no idea how long the spacecraft would last,” Stone said.

Voyager 1 and its twin Voyager 2 probe launched in 1977, with Voyager 2 making its way toward the outer edge of our solar system. If the probe were to look back on Earth today, our planet would appear 10 times dimmer than in this photo.

These family portrait images are the last that Voyager 1 sent back to Earth. Mission specialists subsequently turned the camera off so that the computer controlling it could be repurposed. The spacecraft is still operating, but no longer has the capability to take images.

The image of Earth had a such profound impact on the late Carl Sagan, that he titled his 1994 book, “Pale Blue Dot,” after the image of Earth in the family portrait series. You can read the most famous passage of his book below. In 2014, Neil deGrasse Tyson hosted an updated version of Sagan’s iconic television series, Cosmos. One episode features a recording of Carl’s famous passage, inspired by the Voyager images.

“Look again at that dot,” Sagan wrote in his book “Pale Blue Dot.” “That’s here. That’s home. That’s us. On it everyone you love, everyone you know, everyone you ever heard of, every human being who ever was, lived out their lives. The aggregate of our joy and suffering, thousands of confident religions, ideologies, and economic doctrines, every hunter and forager, every hero and coward, every creator and destroyer of civilization, every king and peasant, every young couple in love, every mother and father, hopeful child, inventor and explorer, every teacher of morals, every corrupt politician, every ‘superstar,’ every ‘supreme leader,’ every saint and sinner in the history of our species lived there — on a mote of dust suspended in a sunbeam.” -Carl Sagan, “Pale Blue Dot,” 1994

Can’t wait to see what Voyager sends back from the next solar system it enters.

Any chance you can show where on the main image the other planets are?

A perfect complement to Jim Lovell’s comment about putting his thumb to cover up the entire Earth during the Apollo 8 mission in Decembet, 1968. The fact that we as a species are capable of such technological perspectives is incredible and indeed humbling.