Our Spaceflight Heritage: the legacy and milestones of Skylab 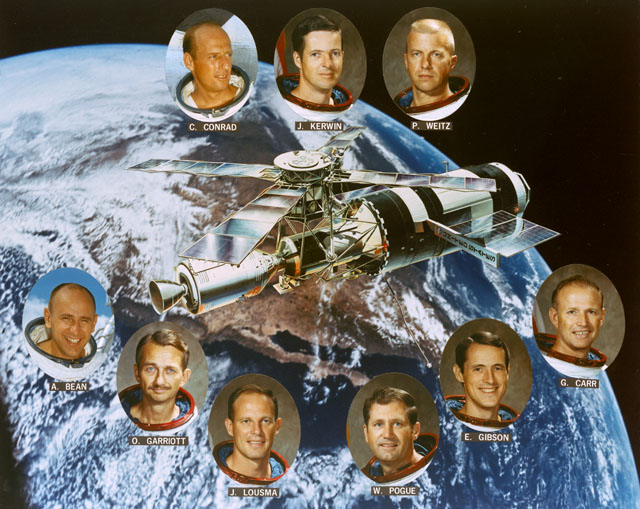 Thirty-five years ago today on July 11, 1979, Skylab reentered the Earth’s atmosphere after nearly six years in orbit above our world. Skylab was the first U.S. manned space station to be sent aloft. It was designed to house three crew members per mission and proved that humans could live and work in outer space for extended periods of time. The Skylab science and engineering laboratory, weighed in at a hefty 169,950 lb (77,088 kg ), was a solar observatory, a microgravity and medical lab, an Earth-observing facility, and a home away from home for its residents. The goal of the Skylab Program was to prove that humans could stay in the microgravity environment for long periods of time, to expand the knowledge of solar astronomy beyond Earth observatories. A total of nine men stayed aboard the station at three at a time and they achieved all of these goals – and more. The astronauts who served on Skylab included: Launching on an unmanned Saturn V rocket that was left over from the Apollo Program on May 14, 1973, the first crew did not arrive to Skylab until 11 days later on May 25. On its way to orbit, airflow caused Skylab’s micrometeorite shield and one of two solar arrays to tear during launch.

The other solar array panel could not be deployed which resulted in reduced power for the station. Engineers in mission control maneuvered Skylab’s secondary solar panels to face the sun to provide as much electricity as possible. This positioning caused temperatures onboard the orbiting laboratory to soar to 126 F. Over a period of ten days, NASA engineers developed procedures that successfully lowered the temperature of the workshop.

After the first crew made repairs to the parasol sunshade, temperatures inside Skylab were lowered to 75 F. A thruster leak caused trouble for the second crew, causing Alan Bean’s rendezvous with the station to be more challenging than expected. Once they were on board, a second thruster developed a leak. Plans were drawn up for a rescue, but the crew was able to complete the mission as planned. Engineers at Marshal Space Flight Center designed the orbital workshop by converting a Saturn V rocket stage component into a habitable space module. Three hundred scientific and technical experiments were conducted including 16 biomedical experiments on how a human adapts to zero gravity, solar observations, and mapping Earth’s resources. Skylab was only occupied for a total of 171 days and 13 hours.

The Skylab Program ended when the space station reentered Earth’s atmosphere with portions of it impacting off the Western Coast of Perth, Australia and South-Eastern Indian Ocean after remaining in orbit for a total of 2,249 days. It had been hoped that one of the early space shuttle missions could be used to reboost Skylab and save it for future use. This, however, was not to be.

Skylab represents a turning point in spaceflight, linking the Moon flights of Apollo to long-duration missions aboard the International Space Station. NASA’s Skylab and Apollo-Soyuz Test Project missions paved the way for cooperative efforts that would one day lead to the International Space Station. NASA is now partnered with the  Russian Federal Space Agency, the European Space Agency, Canadian Space Agency, and the Japanese Aerospace Exploration Agency under the ISS Project. Some sixteen nations now collaborate with this initiative – and it all began with the U.S.’ post-Apollo efforts.

Skylab was probably my first memory of spaceflight, or at least the end of a spaceflight. They announced on the news a reward for anyone that found the fallen pieces of Skylab. I’m quite sure they didn’t say anything about where this might happen in the first report, and being all of five I promptly set off to the neighbors yard to find my piece of Skylab. I recall being a bit crushed when my parents told me I wouldn’t find it around the neighborhood, and I think I grumbled when it turned up in Australia. If they were going to crash a space station they could at least do it in MY neighborhood. Good fun, and I always stayed interested in space thereafter.