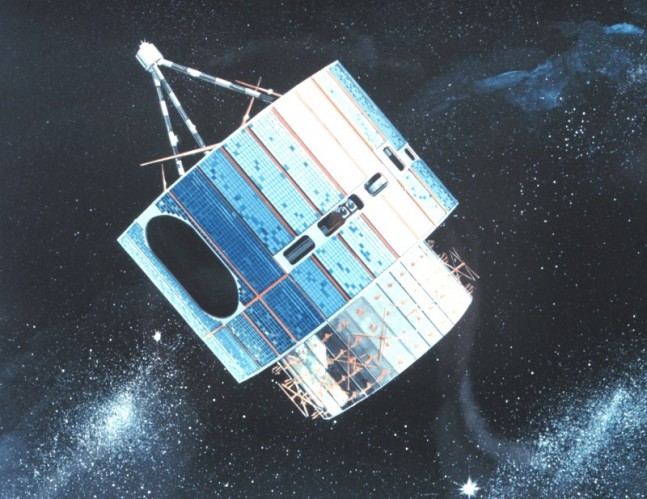 On Oct. 16, 1975, the first of the Geostationary Operational Environmental Satellite (GOES) series was launched from Space Launch Complex 17B at Cape Canaveral Air Force Station. Operated by the National Oceanic and Atmospheric Administration, it was launched on a Delta 2914 expendable rocket which was developed by NASA’s Office of Space Science Applications. GOES-1 was placed in geostationary orbit directly above the equator to gather data for the Global Atmospheric Research Program (GARP). Weighing almost 1,400 pounds (631 kg), GOES 1 was positioned over the Indian Ocean and was operated by the National Oceanic and Atmospheric Administration (NOAA). The spacecraft was essentially a cylinder some 75 inches (190 cm) in diameter and 105 inches (267 cm) high in length. The spacecraft was covered by 15,000 solar cells which provided the power for the satellite. The satellite also used a space environment monitor (SEM) to measure proton, electron, and solar X-ray fluxes and magnetic fields. GOES 1 was handed over to the European Space Agency (ESA) on Dec. 1, 1978. The spacecraft was then controlled by the European Space Operations Centre located in Darmstadt, Germany. A year later, operations returned to NOAA who later reactivated the satellite when GOES 5 experienced a failure on July 30, 1984. GOES 1 eventually stopped working on Feb. 3, 1985.