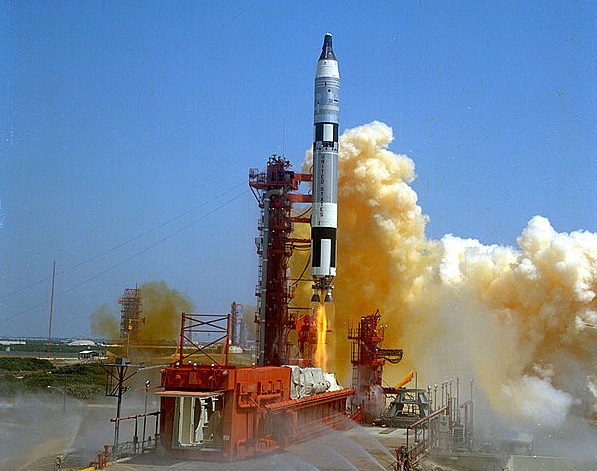 On this day in 1965, a  Titan II rocket carrying Gemini astronauts James McDivitt and Edward White launched from Complex 19 in Cape Canaveral, Florida. The four day spaceflight was an attempt to overcome the flight of the Soviet Union’s Vostok 5. The highlight of the mission was the first spacewalk (EVA) by an American, Ed White, who floated outside the Gemini IV spacecraft for only 23 minutes. He was the second man ever to perform a spacewalk, next to cosmonaut Alexey Leonov. The fourth mission of the Gemini Program had the objective of understanding the effects of a prolonged spaceflight which included this milestone spacewalk. The mission was designed to test the performance of astronauts and their spacecraft, evaluating work procedures, schedules, and flight planning for the duration of the flight.  Commander McDivitt depressurized the cabin at 2:33 pm EST, leaving White to open the hatch only a minute later.

Tied to an 8 meter tether, White used a hand-held maneuvering unit that provided a method to control direction during his EVA. White used his body and pulled on the tether to get back to the spacecraftas, the fuel supply on the unit was depleted within three minutes. According to NASA’s Composite Air-To-Ground and Onboard Voice Tape Transcription, flight controllers in Houston became frustrated when they could not communicate with White about the time constraint of his spacewalk.

McDivitt, to White: I’m going out to PUSH-TO-TALK and see what the Flight Director has got to say.

Flight Director Chris Kraft, to Gus Grissom: The flight director says, get back in! (Kraft was not on the air-to-ground loop with the astronauts.)

McDivitt: Gus, this is Jim. Got any message for us? White tried to take more pictures just as an excuse to stay outside longer. McDivitt had to persuade him to return to the spacecraft. Other than White’s historic spacewalk, there were eleven experiments aboard Gemini including Earth photography, space radiation measurements, and medical effects of prolonged weightlessness.

• Experiment D-8 used five dosimeters to measure the radiation in the spacecraft environment.
• Experiment D-9 was an experiment in simple spacecraft navigation where the crew used a sextant to measure their position using the stars. The objective was to investigate the feasibility of using this technique for lunar flights on the Apollo program.
• Experiments S-5 and S-6 were both photography experiments where they used a 70-millimeter Hasselblad camera designed to high-quality color photographs of the weather and terrain below Hahramaut Plateau on the southern portion of the Arabian Peninsula.
Photo Credit: NASA

• There were two medical experiments: M-3 and M-4. The first was a bungee cord that the crew used for exercise. They said, after the mission, that this got harder as the mission went on, though this may have been due to a lack of sleep. The second was the phonocardiogram experiment, which had sensors attached to their bodies that measured heartbeat rates, especially during liftoff, EVA, and reentry.
• MSC-1 measured the electrostatic charge in the spacecraft,
• MSC-2 was a proton-electron spectrometer which provided detailed data of the radiation environment of the South Atlantic anomaly region
• MSC-3 was a tri-axis magnetometer was designed to determine the magnitude and direction of the local geomagnetic field with respect to the spacecraft.
• MSC-10 involved the crew photographing the red-blue Earth limb. All experiments performed aboard Gemini IV were considered to be successful. However, not everything went according to plan on this mission.

A computer malfunction on the 48th revolution made the planned computer-controlled reentry impossible. An open-looped (zero-lift ballistic) reentry, similar to what was used during the Mercury program during Gemini’s 62nd revolution around Earth, was performed instead. Gemini 4 splashed down at 12:12pm in the Western Atlantic Ocean, 43 nautical miles (80 km) short of the intended landing target, and was recovered by the USS Wasp.

The Gemini Program was a necessary intermediate step between Project Mercury and the Apollo Program. The Gemini IV spacecraftwas transferred from NASA in 1967 and is on permanent display at the National Air and Space Museum (NASM) in Washington, D.C.